Apple’s iPhone event: What to know about the iPhone XS, XS Max, XR, and Apple Watch 4 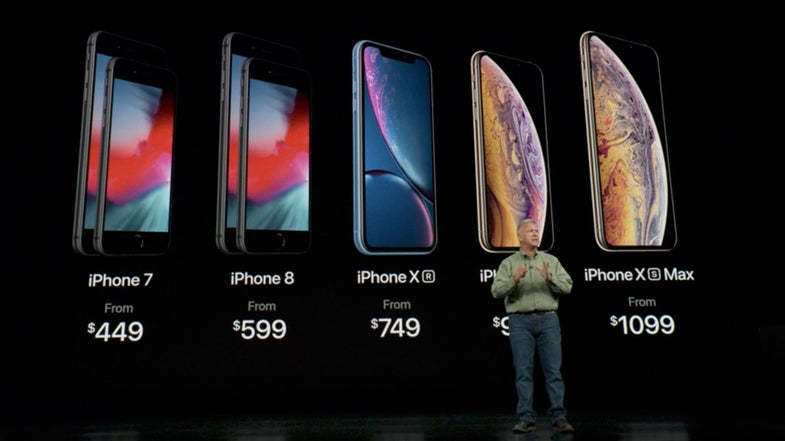 Today’s big Apple announcement event is officially history, and there’s a lot to unpack about all the new products. The big news were the iPhones, of course, and there were three new models to check out. The Apple Watch got a very substantial update as well, that Apple hopes might prevent you from literally dying.

Here’s a running list of commentary, specs, and facts from the presentation. And if you’re just curious about the price of the new iPhones (which is probably how you ended up here from Google in the first place), just look at the picture above. We’ll get some hands-on time with the new devices soon, but here’s a recap to hold you over.

With the Apple Watch heart attack detector talk out of the way, it’s time to dig into what is “by far the most advanced iPhone we have ever created” according to Cook.

It’s made of gold-colored stainless steel with glass on the front and back for the new gold version. There are three familiar color options total. The back is the most durable glass on a smartphone yet.

The screen on the new iPhone Xs is “Super Retina,” 5.8-inches OLED screen, 458 pixels per inch. The screen is as big as the iPhone 8 Plus, in a smaller device. It’s compatible with Dolby Visio and HDR 10. It has a 60 percent greater dynamic range.

There’s a bigger version with a 6.5-inch OLED display called the iPhone Xs Max. That name is very bad, but the phone looks pretty amazing.

It’s now IP68 rated, so you can drop it in the pool and go get it and it will still be fine. That’s a step up from the bathtub-grade waterproofing on the previous models.

Apple has updated almost every hardware aspect of its cameras, including deeper pixels on its sensor, which is also physically larger. It has a wide and telephoto lens, both of which are 12-megapixels in resolution.

The real updates, however, come from the processing power and the “computational photography” aspects of it.

Portrait mode has gotten a substantial upgrade in that you can now control the amount of fake blur it applies to backgrounds. You can have the background go from really sharp to very blurry.

If you’ve been waiting for two SIM cards in an iPhone, then your time has finally arrived. This kind of thing is useful for people who travel a lot or want an extra data plan outside their normal plan. 10s and 10s Max will have a regular SIM and an eSIM slot. The Chinese version will have two typical SIM slots, which is a very common setup in that country.

The new brain behind all that iPhone screen real estate is the A12 Biionic processor. It has an eight-core design up from two cores in the previous model. It can process five trillion operations per second, which sounds like plenty for playing Angry Birds or Tinder.

It’s the world’s first 7 nanometer chip. There are a ton of technical upgrades here and I’m interested to dig into the technical stuff after the presentation.

Interesting to hear that the iPhone is still capped at 512 GB of storage when the Samsung Galaxy Note 9 made such a big deal about how it’s expandable to 1 TB.

A12 is clearly tweaked with AR in mind. You can now put virtual fish into the world, which is fun. But all this persistent object stuff seems like it will eventually make for really fun multiplayer games.

The first demo is a new game from Bethesda shows off the power of the new iPhone. Blades is a large-world role-playing game based in the Elder Scrolls universe. The presenter is careful to compare it to the performance of a high-end gaming console and not a PC so as not to upset the hardcore PC gamers.

Honestly, I’m really excited about this in the kind of nerdy way that got me made fun of in high school. Now it’s cool, though. Thanks, Apple.

Apple says it’s now running on 100 percent renewable energy. Plus, parts of the new iPhone are made from renewable materials. The screen, for instance, is more than 30 percent bio-based plastic. The company is also using 100 percent recycled tin in the logic board. It’s a small change, but you have to consider the volume in which Apple deals.

The company also touted its iPhone recycling robot, Daisy. We got an exclusive first look at it earlier this year.

The second app demo is an AR-based app that analyzes a basketball player’s performance in real-time. It ensures things like the timing of your shots and even your posture while you’re shooting. It’s endorsed and developed by NBA Hall of Fame member and famous Canadian, Steve Nash. It doesn’t use sensors on the court of the ball, just machine learning that watches and figures out why you keep putting up bricks and the other guys in your pickup game keep making fun of you.

The last game demo is Galaga in which the app barfs spaceships into the real world and you run around shooting them. It looks stressful, to be honest. I’d rather have something table-top-based like Warhammer.

It’s an aluminum-shelled phone that looks like a hybrid between the iPhone 8 and the iPhone X. It has an edge-to-edge LCD screen, not a fancy OLED like the X models. Apple calls it the Liquid Retina display that’s 6.1-inches on the diagonal. It’s sized right between the 8 and the 8 Plus.

It no longer has a home button and you swipe up to go to the home screen. This is the bridge to the iPhone X series phones. It even has Face ID, so no more fingerprint sensor for logging into your phone. This is a much different experience than the 8 even if it’s aimed at a similar crowd.

The camera in the 10R is the wide-angle camera module from the 10Xs. It has Portrait Mode for blurry backgrounds, but doesn’t require the second camera for depth information. The Google Pixel 2 also does this with a single camera.

The battery life in the 10R is 90 minutes longer than it is in the iPhone 8 Plus, which was a champ.

This is the budget version in the iPhone lineup, but they all share a reasonably similar form-factor. Apple wasn’t kidding when it said the original X was the future for the iPhone.

Cook starts the presentation talking about the company’s signature wearable device, which is still the most popular watch in the world. The new version of the device has a screen that’s 30-percent larger than the predecessor. The watch itself is thinner and has less total volume than Series 3.

All that screen size adds space for “complications” which allow you to add individual widgets around the actual clock display. First impressions: It looks stressful, but I also hate swiping through my current Apple Watch because it seems small. The less I have to touch the face with my finger, the better.

The speaker is now 50 percent louder, which means you won’t have to press it against your ear to hear Siri in a crowded environment.

The back is now black ceramic and sapphire crystal, which radio waves can penetrate so it has increased cellular connection reliability. It’s made of jewels.

Upgraded graphics and traditional processing promise to make the Apple Watch Series 4 twice as fast as the previous version. If only it could make my running faster while I’m wearing it.

The upgraded gyroscopes can now detect a fall, so you won’t end up like that lady from the “I’ve fallen and I can’t get up,” commercial sketch comedy troops referenced so much in the ’90s. The watch detects wrist movement and impacts and generates an alert. If you’re immobile for more than a minute after a fall, it will automatically call emergency providers.

In addition to the falling safety stuff, Apple has also doubled down on the heart rate monitoring. It can see atrial fibrillation with electrical sensors on the back of the watch that perform an actual ECG on you. I look forward to wearing this and constantly freaking out about it.

The device is FDA approved, which is a pretty big deal. The irregular heart rhythm alert is also FDA approved. Both are coming later this year.

The event is officially underway! It started with a Mission: Impossible parody video in which a delivery person races to the Steve Jobs theater to deliver Tim Cook’s “clicker” to move between slides. It’s adorable, but not that adorable.

Cook starts with stats to show off how successful Apple has been to this point. He touts 500 million Apple store visitors and 2 billion iOS devices.

iOS 12 will be available Sept 17 and macOS Mojave September 24.

Join us September 12 at 10 a.m. PDT to watch the #AppleEvent live on Twitter. Tap ❤️ below and we’ll send you updates on event day. pic.twitter.com/i9mGHTKhvu

If you want to brush up on last year’s event, you can go back and check out our live recap from the 2017 presentation.