Can the iTunes App Store Be Saved?

Or can it simply be replaced? 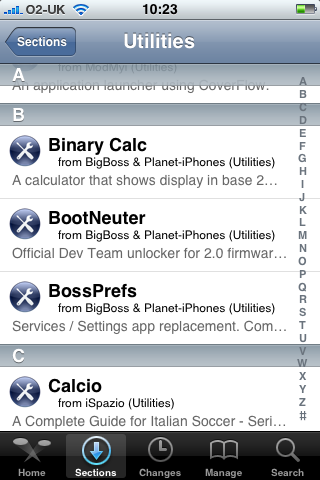 An iPhone app named “Cydia” made some big news recently, for posing the first real challenge to Apple’s draconian dictatorship over the iTunes App Store. What’s the big deal? If you haven’t heard of Cydia, it’s a gateway app — a kind of seedy, underground version of the official App Store that let’s you install unofficial, unauthorized and otherwise illegal apps to your Jesusphone or iPod Touch. The hubbub is over the latest version, which now allows developers to sell their wares and accept payments right inside of the Cydia app itself via Amazon Payments, Facebook Connect, Google logins, and soon PayPal.

Of course, Cydia and anything acquired through it can only be installed if you’ve mustered the cojones to jailbreak your touch-erific Apple handheld, thereby voiding its warranty. So, for the vast majority of multi-touch fetishists out there, news of this “alternate” app store is completely meaningless. Why should you care about it, then? Because the iTunes App Store, as it exists, is broken.

Ask any iPhone developer and he or she will tell you what a nightmare it is getting an application approved for sale — or even to give away — at the official storefront. Apple, already infamous for its Cosa Nostra-like secrecy, has the iTunes App Store on total lockdown. The approval process for apps is a black hole. The Web is rife with tales of developers spending tens of thousands of dollars and man-hours to create an app, only to have it rejected or just completely ignored after months of waiting around, without so much as a word from Cupertino. And since Apple runs the entire show without having to answer to anyone but itself, it can reject an app for any reason it sees fit. That includes apps that pose a potential competitive threat to any of Apple’s own software products. That’s just crappy.

By now, everyone on Earth has seen one of those ubiquitous disembodied-hand ads. In them, Apple’s main selling point for the iPhone is the third-party app and all of the amazing things you can do with them. And yet, the iTunes app review process, by design, is stifling the development of what’s possible on the platform. For example, StarPlayr is an app that would have allowed you to play Sirius radio on your iPhone. Its developers were told by Apple that their “application could not be approved at this time,” despite the fact that a Mac version of the program exists. PdaNet would have allowed you to use your iPhone as a modem tethered to your laptop. Expect to see Bernard Madoff released from his shackles before this amazingly helpful utility is ever sold at the official App Store. Newber is an app that adds an extra line to your iPhone and redirects calls to a landline, based on your GPS location. When you’re at home, have calls sent to the kitchen phone. At work? Calls will ring through to your desk phone instead. This battery saver has spent more than 160 days languishing in the purgatory of the App Store approval process. While Newber’s developers are holding out hope for an official thumbs-up from Apple, StarPlayr and PdaNet have gone to the dark side and are available immediately on Cydia. Meanwhile, how many talented application developers, fed up with the process, are giving up on the iPhone in favor of Android or other platforms?

As excited as I am by Cydia (and its NES emulator in particular), I’m not so sure it’s the answer to what ails the App Store. Even if by some miracle or court order Cydia and other rogue app stores were able to function on non-jailbroken iPhones, is that really a good idea? By keeping the iPhone a closed system, Apple is able to maintain a certain level of safety and security on it. Each application available for download has been officially vetted by Apple, ensuring (in theory) that it will be free of bugs, security holes and performance drags. The app development process may be rigorous and painfully flawed, but there’s some comfort to be found in the fact that Apple knows exactly who’s responsible for every piece of software officially sanctioned for use on the iPhone. When you download an app off of Cydia, who’s to say it wasn’t made by the same deposed Nigerian prince who floods your inbox with polite requests to pull a fast one on your bank account? Opening up the application marketplace to third party vendors could potentially leave the casual iPhone user vulnerable to viruses, phishing scams, identity theft and other problems. Then again, isn’t that the responsibility of the user, and not Apple? If someone downloads a virus that cripples their iPhone, it’s their own fault. Apple shouldn’t preemptively punish the rest of us by cutting off our access to an entire universe of potentially exciting and innovative software.

Legal third party app stores won’t be opening for business any time soon, so the non-jailbroken public has to wait for Apple to fix the App Store on its own. I think a lot could be remedied simply by taking the mystery out of the process. Apple should tell developers that it’s received their submissions, let them know when they’re scheduled to be reviewed, inform them when testing has begun and send an email if problems arise (instead of just breaking out the REJECTED stamp). The process could be democratized a bit, too. Imagine a Digg-like section of the Apple site where application submissions are public record. We can read about them, look at screens and then vote for our favorites. The most popular ones rise to the top and are approved. If rejected, Apple has to provide a good reason as to why. Put even just a little bit of power into the hands of the people and everyone wins: Apple sells more apps, good developers make more dough and the public gets programs we actually want to use, instead of just another hundred ways of making the iPhone flatulent.