Battle of the Internet Video Boxes: Netflix vs. Apple TV vs. Vudu

We pit the leading digital-delivery TV boxes and services from Netflix, Apple and Vudu against DVD and Blu-ray. Who will reign supreme?

We live in interesting TV times. DVD players are as common as toasters. Basic Blu-ray players offer high-def flicks at prices we can (almost) afford. And now, if you can’t bother to go to the store or wait for a disc to arrive, you finally have some enticing download options.

The biggest news, of course, is the recent arrival of Roku’s streaming Netflix Player, which is finally giving the company a service to match its name. The Netflix Player joins two other on-demand boxes: Vudu, which premiered last September, and Apple TV, which got upgraded to a movie-playing box in February. So, what’s the best way to go?

Value: For cheapskate movie lovers, nothing comes close to Netflix. For about $150 upfront and $9 bucks a month, you can watch virtually anything ever filmed, anytime you want. Shell out $45 for a basic upscaling DVD player such as the Philips DVP3960 (a newer version of the model I used for testing), and watch any of 100,000 titles—movies and TV episodes—on discs delivered by mail ($9 for one disc at a time, $14 for two at a time, etc.). While you’re waiting for new disc deliveries, use the $99 streaming box from Roku for an included, all-you-can-eat selection of 10,000 titles.

Watchability: In less-challenging scenes with good lighting, the differences between the Netflix Player and its competitors were negligible. But when it came to dimly lit shots, like a dark dinner scene from The Motorcycle Diaries, I felt like I was looking through a swarm of mosquitoes.

Still, even most differences were noticeable only when I stood an unhealthy three feet back from my loaner LG60—a slick 47-inch LCD TV. At about 12 feet, on the couch, they all looked great. For standard-definition films (i.e. most), Netflix’s box wound up being the best choice due to price and sheer volume.

High-Def Smackdown: The Netflix Player drops out of the running here, since it’s currently restricted to SD video. “Netflix will offer movies in HD in the future,” was the most info I could get out of spokesman Steve Swasey. But the Netflix mail-order service is still in the game. It provides all 600 or so titles currently on Blu-ray, handily beating the 330 HD downloads from Apple and dwarfing the 122 from Vudu.

Ease of Use: The Netflix Player has some new-product glitches, but they are surprisingly few. Oxymoronic as it sounds, the box hesitates to pause. I usually had to click the play/pause button several times to freeze the action. And the synch between the Web site and net-connected service isn’t always smooth. You go online to cue up videos to watch, and changes you make on the site should show up within seconds on the player. Sometimes they did. But once I had to wait a full half hour (and finally restart the box) before the list updated.

Otherwise it was a cinch to operate. The four-way directional buttons aren’t the slickest, but they make moving though a video smooth enough. Netflix actually has a very clever interface for this. Although it’s a streaming box with limited memory, it has enough to store thumbnails representing different parts of the video. When you scroll through these and click one, the box retrieves the part of the video you want in a few seconds. This is more efficient than Vudu’s and Apple’s, which can’t even show you a preview of a scene until after they have loaded it (up to half an hour for parts near the end of a movie).

Next: Vudu and Apple join the brawl. And for comparison screenshots, launch our review gallery here.

Value: Netflix’s main competitors cost a lot more. Take the Vudu box. It sells for $295, and pricing varies for each film, from as little as $0.99 for a back-catalog rental to $19.99 for a recent-flick purchase. Furthermore, many films are offered only for sale. (I’d be willing to spend $3 to check out National Treasure 2 on a slow evening, but not $20 to own it.) With only 6,000 titles currently available the choices are fewer. And many of Vudu’s 122 HD offerings are older flicks such as Once Upon a Time in the West and the original The Italian Job.

Watchability: After watching about a dozen movies and TV shows, I found Vudu to offer slightly better quality than its competitors. Colors looked richer, and I saw less of the fuzz and fewer of the splotches that result from digital video compression. The same dinner scene from The Motorcycle Diaries that the Netflix player had trouble with looked much crisper on Vudu. Truth be told, you’d have to be a videophile to notice these differences. But some people are, and Vudu caters to them.

High-Def Smackdown: Against Apple’s 330 HD downloads and Netflix’s 600+, Vudu has some serious strikes against it. But so much for quantity; what about quality? To judge, I set it against the $350 BD-P1400 Blu-ray player from Samsung. This test was the most surprising. I expected Blu-ray, with its 50-gigabyte discs and pricey player, to trounce both the Vudu and Apple TV. But the differences ranged from extremely subtle to nonexistent.

Joan Allen looks great in The Bourne Supremacy, for instance, whether on Vudu or Blu-ray, but she had an even better complexion in the Vudu version.

Ease of Use: Vudu was good from the start, and it remains a smooth operator. The remote’s clickable scroll wheel makes sliding through menu options simple. And it’s the most intuitive method for jumping forward or back while a title is playing.

Apple: Jack of all Trades

Value: The math is similar with Apple TV, which costs $229, plus between $3 and $5 per rental or $10-$15 per purchase. (Its catalog has about 1,500 films and 600 TV episodes—including some HBO programs.) While the other catalogs are technically bigger, Apple’s downloadable high-def offerings are far richer, with about 330 titles vs. Vudu’s 122 (Netflix only has high-def films on Blu-ray). Many hot recent films—including There will Be Blood, I Am Legend, No Country for Old Men, Atonement, The Golden Compass and Juno—were offered in HD by Apple TV but not by Vudu.

Another point for Apple is that it’s not just a movie player. It streams videos from YouTube, and with a decent TV, they are quite watchable. I’m addicted to Battlestar Galactica. At my Season 4 premier party (yep, I’m a nerd), I streamed the 8-minute Battlestar Galactica primer: What the Frak is Going On? to get my newbie viewers up to speed before the main feature.

Apple TV also streams music from iTunes to a stereo, which I’ve done at my less-nerdy parties. And you can view photos from Flickr. (Although, much as I love Flickr, I don’t get the point of watching it on TV.)

Watchability: Though better than the Netflix Player, the Apple TV was could also be noticeably fuzzy in dim scenes.

High-Def Smackdown: Apple TV underwent the same Blu-ray faceoff as the Vudu, and proved just as promising. I stared at the beautifully-shot movie Training Day on both Blu-ray and Apple TV and saw the exact same details—down to individual hairs in Denzel Washington’s beard and bits of pixilation in Ethan Hawke’s face.

High-def Blu-ray offerings still outpace Internet versions. But if HD downloads can catch up (and Apple’s coming pretty close), I’m not sure anyone will need to buy a Blu-ray player.

Ease of Use: When I first started playing with Apple TV back in February, the experience was rough. Downloads frequently froze or failed, rewinding or fast-forwarding often crashed the player, and Wi-Fi connections often dropped—causing music streams, for example, to cut out.

Things are a little better now. Both standard-definition and HD downloads were flawless. And skipping forward or back in a video—though sometimes still a little choppy and sluggish—didn’t bring the device down. But, eerily like a Windows PC, the Apple TV would occasionally freeze up or crash for no apparent reason and require a restart.

I’d love to keep all these boxes in my living room and continue to download movies for free as part of my evaluation process. But after I ship them back and have to pick up the bill myself, I’ll go for the Netflix Player. There are downsides to be sure. For one, there’s a gym membership guilt-trip aspect to the service (If you use it every week, you get your money’s worth; if you slack off, you’re throwing cash away). For another, its monster catalog has a serious dearth of new releases—but for those, there’s always good ol’ fashion DVDs and Blu-ray discs. Overall, Netflix’s Roku box is a winner. It offers fine quality and great convenience at a price I can afford. And though I’ll miss streaming YouTube classics like Battlestar Galactica vs. Star Wars in my living room, it seems like a worthwhile tradeoff. 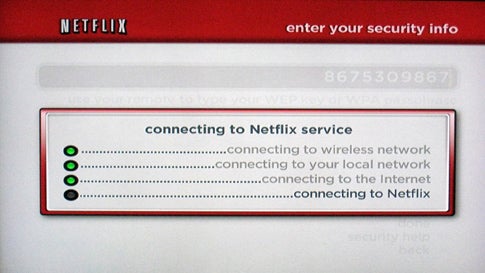 Like Apple TV and Vudu, the Netflix Player connects to wired or wireless networks. It found mine in seconds and connected immediately after I entered the Wi-Fi security code. 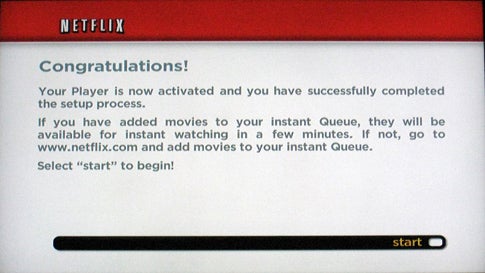 The Netflix streaming service scans your DVD queue for any movies or shows that are also available for download. 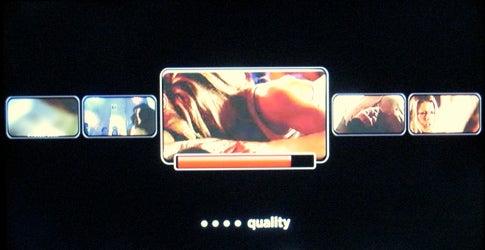 Easy Jump Forward or Back

Scroll through thumbnails to jump to any part of a Netflix stream in seconds.

A Draw: Vudu vs. Netflix vs. DVD

It was nearly impossible to see quality differences in most parts of The Motorcycle Diaries between (from top to bottom) Netflix Player, Vudu and DVD versions. 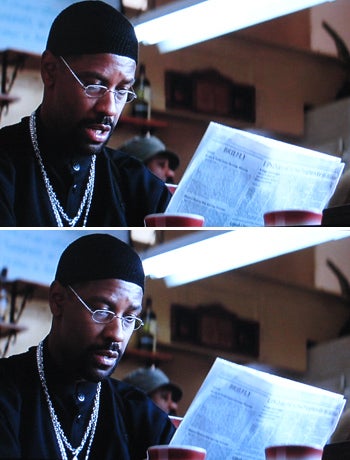 In Training Day, Denzel looks the same on Apple TV (top) and Blu-ray. 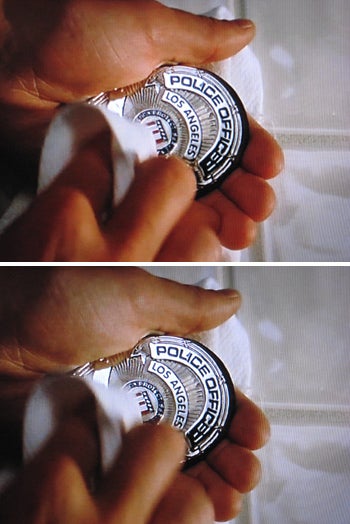 Richer color in this Training Day scene on Apple TV (top) vs. Blu-ray 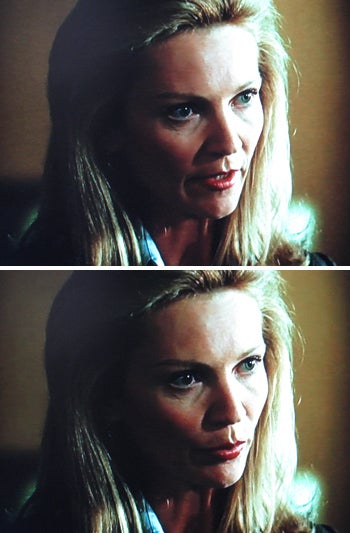