Training for the highest levels of a sport requires fine-tuning of muscle memory, but this is often a visual game,... 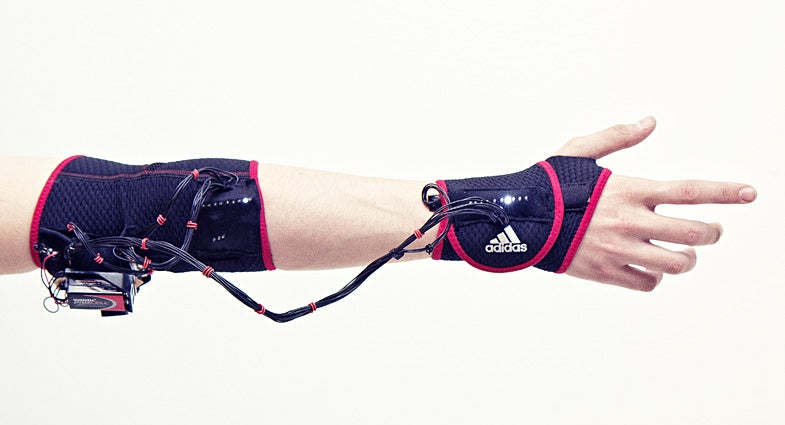 Training for the highest levels of a sport requires fine-tuning of muscle memory, but this is often a visual game, with athletes watching high-speed video of themselves and their competitors to nail down the right moves. So impaired vision can be a major obstacle. A new device developed for the Paralympics gives physical feedback instead — and it could even be used to help athletes emulate the movements of star athletes.

The vibrating arm band, called Ghost, detects a user’s arm motion and buzzes to give feedback. It would work by pre-loading the wristband’s software with the right pattern of muscle movements, or even a certain athlete’s exact swing. The pattern includes certain way points, which would indicate where your swing or stroke is going. Then the device would guide the athlete through the motions. Sensors can detect the joints’ flexing and twisting, and vibrations and sounds indicate whether the user is doing it wrong or right. With each try, the athlete’s muscle memory gets better, but there’s no coach demonstrating how to do it and no hours of video to sit through. It could help vision-impaired and fully sighted athletes.

“A bad turn or an error in the kick may mean the difference between first and third place in a race,” said Donovan Tildesley, a blind swimmer and bronze medalist, in a statement.

The device was developed at Imperial College London in the Sports Innovation Challenge, funded by Rio Tinto, a mining conglomerate that provided the gold, silver and bronze in the medals for the 2012 Olympics and Paralympics. The prototype is a finalist for a Dyson Award.