Play tunes and podcasts from your wrist. 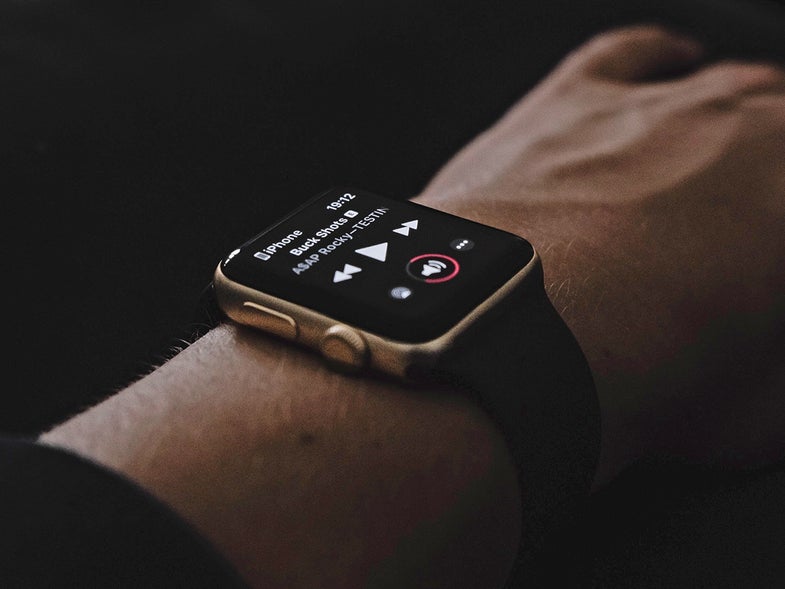 With each successive update, the Apple Watch becomes even more useful. But to get the most out of it, you need to load it up with the right apps. So we collected the best music and audio programs for your smartwatch.

The wearable actually comes with a default Music app, which lets you control your phone’s audio playback from your wrist (at least when that audio is running on Apple’s native apps). But these additional apps can do even more than that: They give you easy access to your tunes, help you identify songs, organize your podcasts, and more. To play around with them, just install them on your iPhone, and companion versions will appear on your Apple Watch.

The biggest name in music apps now has an official Apple Watch version—but don’t expect too much from this first incarnation. For now, it only lets your wearable control Spotify playback on your phone or another connected device, such as a smart speaker). The app works whether or not you’re a Spotify Premium subscriber.

This app lets you start and stop Spotify music from your wrist, hop between recent playlists, jump forward or backward in time on the current track (very useful when you’re listening to podcasts), and mark a favorite song by tapping the heart icon. Unfortunately, the current version of the app doesn’t let you sync your music to your watch, so you can’t leave your iPhone behind when you head off on a jog. However, Spotify says this feature is coming soon.

Spotify for iOS, free or $10 per month for a subscription

Deezer doesn’t have the same prominence as Spotify, but it offers a similar streaming-music service: You can listen for free if you don’t mind putting up with ads, or you can pay $10 a month for unlimited tunes, offline playback, and other bonus features. And like Spotify, Deezer has a dedicated companion app for the Apple Watch.

This app lets your wearable control playback on your phone’s Deezer app. Through it, you can also mark tracks as favorites, jump between existing playlists, turn shuffle on and off, and access Deezer Flow—that’s the personalized, endless radio station that the service builds based on your listening history. Again, you can’t sync tracks to the Apple Watch itself, but this may appear in a future app update. For the time being though, you’ll still have to bring your iPhone along when you want to listen to your music.

Deezer for iOS, free or $10 per month for a subscription

Some songs just force you to sing along. To do that without embarrassing yourself, you need to know the right words—and Musixmatch is one of the best lyrics-finding apps in the business. The app itself is free, but if you upgrade to a premium plan, you can sync lyrics to your phone for offline use. The Apple Watch companion app brings Musixmatch’s key features right to your wrist.

The app is smart enough to display lyrics synced to the music your phone happens to be playing, whether in the default Music app or in Spotify. Even better, it can identify music playing around you, which makes it perfect for nights out, weddings, and road trips. The text shows up clear and legible on the Apple Watch display, and you don’t have to lift a finger as the pages automatically update.

Musixmatch for iOS, free or $3 per month for the premium plan

VLC is one of the most dependable, versatile, and feature-packed media players out there. It’s already available on Windows, macOS, Android, and iOS, and its Apple Watch incarnation lets you remote control the program as it plays on any other device.

For example, if you’re blasting some tunes through the VLC program on your laptop, then the wearable app lets you start and stop playback, adjust the volume, view details of whatever song is currently playing (in case you’ve forgotten an artist or album name), or pick another playlist. In fact, you can browse through your entire media library, video and music tracks alike, from your wrist. As with all the software released under the VLC umbrella, this app is free and open source.

TuneIn Radio gives you access to thousands of stations from around the world, covering sports and news as well as every imaginable genre of music. And when you tune into the radio on your phone, you can control it through your Apple Watch app. The basic functions are free, although they come with an occasional ad. If you upgrade to a premium account, you also get access to live play-by-plays of sports games and commercial-free stations curated by TuneIn Radio staff.

From your wrist, you can start and stop playback, quickly jump forward or backward in the current stream, add a station to your favorites, or switch to a different station you’ve recently listened to. You can also access podcasts through the app.

TuneIn Radio for iOS, free or $10 per month for the premium plan

If you want to quickly identify a song that the car radio just started blaring, you shouldn’t waste time unlocking your phone and hunting down the relevant app. It’s far easier to just tap your wearable and see the name appear. Enter Shazam for the Apple Watch.

The tune-recognizing app is a breeze to use on mobile, and the Apple Watch app that comes with it lets you launch Shazam and identify songs in seconds. Swipe up, and your previous Shazam searches appear. With another tap, you can send identified tracks to the app on your iPhone, where you can watch associated videos, get more information on a track, and even purchase that song from iTunes.

Our final pick brings you podcasts rather than music—though you can, of course, use it to listen to podcasts about music. Overcast is one of the smartest podcast players on iOS: It lets you set sleep timers, boost dialog volume, cut out silences, increase playback speed without adding distortion (to get through episodes faster), and try out new podcasts without subscribing to them. All this comes free, but for $10 a month, you can also remove the ads inside the app.

That quality carries over to Overcast’s Apple Watch companion app. If you’re listening to podcasts on your phone, your smartwatch can start and stop them. And Overcast also lets you sync audio to the Apple Watch itself, which means you can enjoy your podcasts on a morning walk while leaving your phone behind. On top of that, the wearable app includes a bunch of other cool features, such as playback control, volume adjustment, and the ability to skip forward or backward in an episode.

Overcast for iOS, free or $10 per month for an ad-free version