Want to conduct Sunday Mass but don’t have your copy of the church missal? There’s an app for that. The... 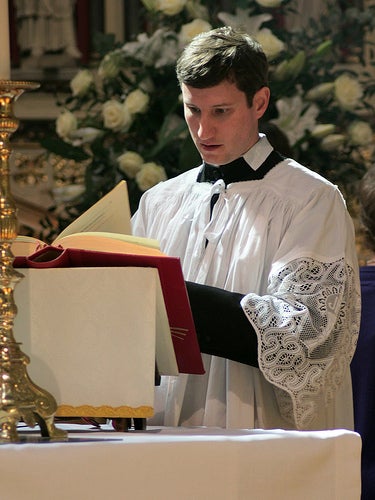 Want to conduct Sunday Mass but don’t have your copy of the church missal? There’s an app for that.

The Rev. Paolo Padrini, an Italian priest who consults with the Vatican, is launching a free iPad app that will contain the complete Roman missal — the book containing everything that is said and sung during Catholic Mass throughout the liturgical year.

It will be available in July, meaning iPads could start appearing on altars in the next few weeks.

Future editions will feature audio as well as commentaries and suggestions for homilies, AP reports.

It’s not the first time that 2,000-year-old prayers will be available in app form. Padrini already has an iPhone app called the iBreviary, which contains the book of daily prayers used by priests. To date, 200,000 people have downloaded it.

The free missal app will be available in July in English, French, Spanish, Italian and Latin. Padrini said the apps were his idea and launched with his money, and are not official Vatican initiatives. But the work seems to fit his role as a consultant with the Vatican’s Pontifical Council for Social Communications.

The Vatican has praised Padrini’s work as a novel form of evangelization. It could also help the church’s efforts to appeal to young people — the Vatican already has regular updates on Facebook and YouTube. Pope Benedict XVI was reportedly given an iPod in 2006.

Padrini, 36, said he expected priests who frequently travel would use the iPad app. He recently had to celebrate Mass in a small parish with a small, aged missal.

“If I had had my iPad with me, it would’ve been better than this old, tiny book,” he said.

The app will have to be updated again next year, when several sections of the missal are scheduled to be changed for the first time in more than 30 years. Some church officials have expressed worry that young Catholics will object to the new translations, having grown up with only one version of the Mass.