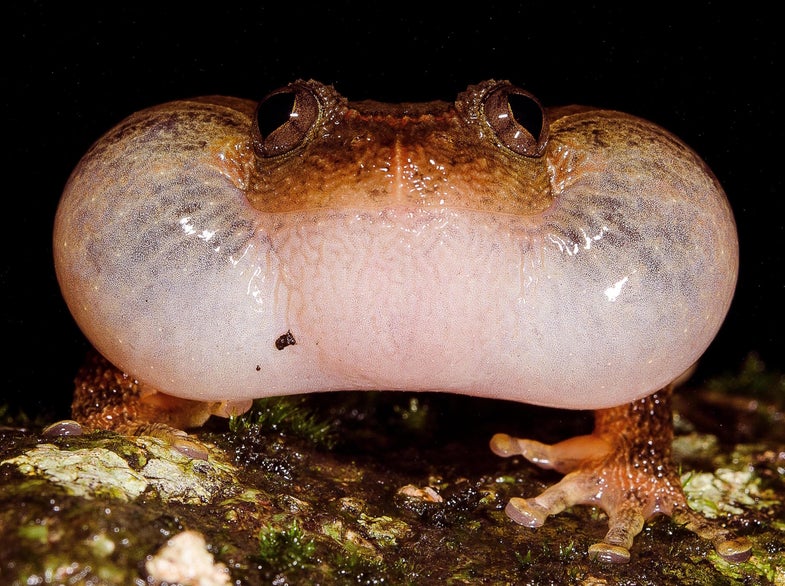 The Kama Sutra describes 64 human mating positions, and certainly countless more have been dreamed up by members of our species. But among frogs, the coital menu is a tad more limited. Among the 7,000-plus known species of frog, only six mating positions have been observed by herpetologists. Until now.

The discovery was made in the Western Ghats, India’s biological super-hotspot, by a team of researchers from the University of Delhi, the National Center for Biological Sciences in Bangalore, and the University of Minnesota. Over 40 steamy nights during monsoon season, the researchers documented the mating behavior of the Bombay night frog, a stream-dwelling amphibian that mates in the overhanging vegetation. As it turns out, Bombay night frogs do the deed differently from other frogs.

Frog Sex 101: Typically when frogs mate, the male climbs onto the female’s back and clasps her tightly with his arms and legs, a position known as amplexus. The clasp ensures that the reproductive parts are well aligned so the sperm will be deposited directly on the female’s eggs (fertilization occurs outside of the female frog’s body). However, the male Bombay night frog uses a looser mounting technique the researchers dubbed the dorsal mount. Forgoing the usual tight embrace, the male Bombay night frog braces itself by clasping leaves or branches, positioning itself over the female’s back. And rather than depositing his sperm directly onto the her eggs, the male releases his sperm onto the her back. The sperm then trickles down onto the eggs. Though it may sound a bit casual or haphazard, it gets the job done.

The study, published in the journal PeerJ, notes that researchers made several other surprising observations during their jungle excursions, including so-called “advertisement calls” by female Bombay night frogs. Usually it’s the males that do the hollering, with female mating calls only observed in 25 species of frogs worldwide.