An observation that could help scientists predict the next big boom 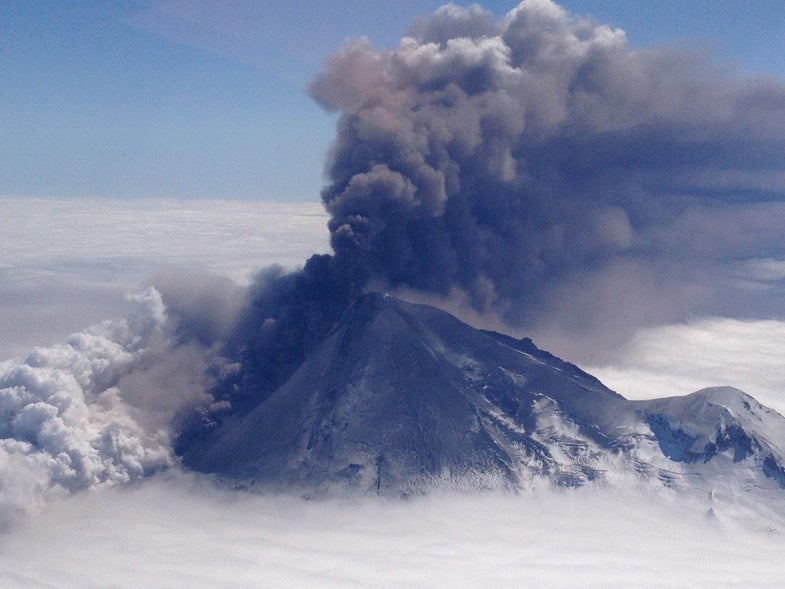 Pavlof volcano eruption on May 18, 2013. Credit: Brandon Wilson/AVO -- Alaska’s Pavlof Volcano: NASA’s View from Space The Pavlof volcano, located in the Alaska Peninsula National Wildlife Refuge has been producing steam and gas plumes since May 13. The volcano's plumes were captured by NASA satellite imagery and photographs taken by the astronauts aboard the International Space Station. The Pavlof volcano is located about 625 miles (1,000 kilometers) southwest of Anchorage, Alaska. Astronauts aboard the International Space Station captured stunning photos of Pavlof’s eruption on May 18, and the next day, the Moderate Resolution Imaging Spectroradiometer or MODIS instrument that flies aboard NASA’s Aqua and Terra satellites captured different views of the ash plume.  The ASTER (Advanced Spaceborne Thermal Emission and Reflection Radiometer) instrument that also flies aboard NASA's Terra satellite, provided a look at the temperatures and lava flow from the eruption.   The Terra MODIS image was taken on May 19 at 2:10 p.m. AKDT local time (6:10 p.m. EDT) and showed the area of heat from the volcano as well as the ash plume. The ash plume appeared as a dark brown color, blowing in a northerly direction for about 30 miles. At that time the ash cloud was about 20,000 feet above sea level.   The ASTER instrument is a high resolution imaging instrument that is flying on the Terra satellite. ASTER captured a visible and near infrared image of Pavlof Volcano at 2:10 p.m. AKDT local time (6:10 p.m. EDT).  The maximum brightness temperature in the ASTER image was near 900 degrees Celsius (1,600 Fahrenheit) at the volcano’s vent, and the lava flow appeared to be 4.8 kilometers (3 miles) long. On Thursday, May 23 at 10:39 a.m. AKDT local time (2:39 p.m. EDT), the Alaska Volcano Observatory (AVO) reported that the Pavlof continued erupting at low levels. At that time, the Pavlof Volcano is under a “Watch” and the current aviation color code is “Orange.” There are four levels of eruption:  Green, Yellow, Orange and Red. Green is a non-eruptive state. Yellow means the volcano is exhibiting signs of elevated unrest. According to the AVO website, an Orange aviation code means that the volcano is exhibiting heightened or escalating unrest with increased potential of eruption, timeframe uncertain, or, the eruption is underway with no or minor volcanic-ash emissions. Red means and eruption is imminent or underway. Small discrete events, likely indicative of small explosions continue to be detected on seismic and pressure sensor networks over the past 24 hours. According to the AVO website, imagery and pilot reports from May 23 showed a very weak steam and gas plume with little to no ash issuing from the vent. Imagery from the ASTER instrument aboard NASA’s Terra satellite indicated heightened surface temperatures through cloud cover, which is a sign that the activity continues. So far, the Pavlof’s activity has been characterized by relatively low-energy lava fountaining and ash emission, but the AVO cautions that “more energetic explosions could occur without warning that could place ash clouds above 20,000 feet.”  For future updates, visit the Alaska Volcano Observatory Daily Update web page: http://www.avo.alaska.edu/ or http://volcanoes.usgs.gov/ The Alaska Volcano Observatory is a cooperative program of the U.S. Geological Survey, the University of Alaska Fairbanks Geophysical Institute, and the Alaska Division of Geological and Geophysical Surveys. Text credit: the Alaska Volcano Observatory/ Rob Gutro, NASA Goddard Space Flight Center NASA image use policy. NASA Goddard Space Flight Center enables NASA’s mission through four scientific endeavors: Earth Science, Heliophysics, Solar System Exploration, and Astrophysics. Goddard plays a leading role in NASA’s accomplishments by contributin.
SHARE

Forecasting a volcanic eruption is difficult and nearly impossible with particularly restless volcanoes that constantly shudder and emit gas and steam. But a team of volcanologists led by Diana Roman of the Carnegie Institution for Science has found a way. Like the proverbial “calm before the storm,” the researchers say that restless volcanoes go quiet just before they erupt.

The team monitored a month-long series of eruptions at the Telica Volcano in Nicaragua in 2011. Of fifty eruptions observed, all but two were preceded by periods of calm that ranged from six minutes to over ten hours. When they looked back over their data, the researchers noticed what Roman called “the icing on the cake”: the longer the quiet period, the more explosive the eruption. This is due to gas pathways being blocked; the longer the blockage, the greater the energy released.

The results are published in Earth and Planetary Science Letters.