This electric cargo ship sails itself

The battery-powered Yara Birkeland could be plying the seas on its own before the year is out. Here's what to know about the innovative vessel. 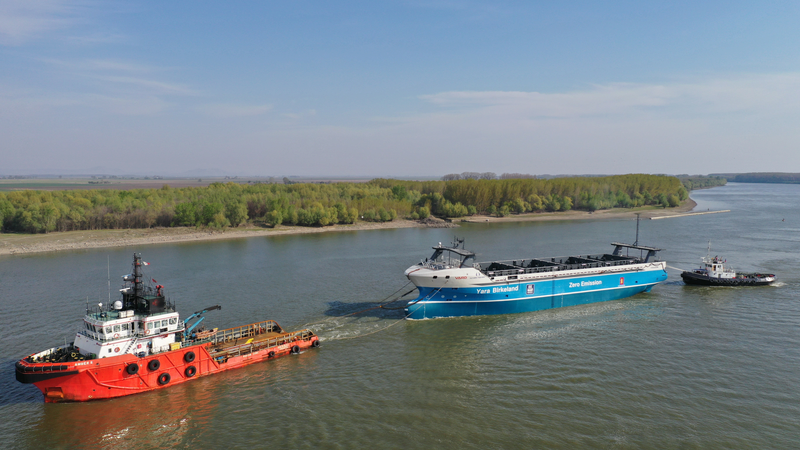 The Yara Birkeland measures just 262 feet long and could set sail as early at this year. Yara
SHARE

An autonomous, zero-emission cargo ship four years in the making is scheduled to set sail for the first time this year, according to CNN. Powered by batteries and guided by sensors, the Yara Birkeland would carve a path around Norway to deliver containers with an onshore crew miles away overseeing the journey.

Chemical company Yara International announced its intention to create the vessel in 2017, one year after Norway opened up the world’s first designated testing area for autonomous ships. President and CEO Svein Tore Holsether explained that the company saw this technology as an opportunity to cut down the more than 100 daily diesel truck trips it commissions between its plant and shipping ports.

“With this new autonomous battery-driven container vessel we move transport from road to sea and thereby reduce noise and dust emissions, improve the safety of local roads, and reduce NOx and CO2 emissions,” Holsether said in a 2018 press release.

To translate that futuristic vision into a working vessel, the company partnered with marine technology company Kongsberg. In an animated video detailing the ship’s proposed features, Kongsberg highlighted navigation sensors to guide its autonomous sailing and communication that can report back to manned control centers on land. Jon Sletten, the plant manager for Yara International’s Porsgrunn factory in Norway, told CNN the ship will be powered by a 7 MWh battery, which is “about a thousand times the capacity of one electrical car,” allowing it to operate at a top speed of 13 knots while carrying 103 containers.

[Related: To move cargo with less mess, these ships unload themselves]

The ship will be just 262 feet long by 49 feet wide, making it much smaller than a giant container ship like the 1,312-foot-long Ever Given, which blocked the Suez Canal earlier this year. As designed, the company believes it could replace 40,000 truck trips annually.

While the initial plan was to get the Yara Birkeland in the water in 2019, Sletten said the team had “overestimated the scope” of the project, which, paired with the pandemic, caused delays. The company also noted that the logistics on land, such as loading and unloading the ship, have proved particularly challenging, leading them to reevaluate their timeline for entirely crewless work. (While this process is still being perfected for the Yara Birkeland, there are already self-unloading ships for material like road salt.)

So, the Yara Birkeland is expected to begin operations in the fall with a reduced crew to help with those on-land operations, though it will be autonomous as it makes the journey between ports. If all goes well, the aim is to transport about half of the company’s container volume by 2022, according to Hellenic Shipping News.

While Yara International says their cargo ship would be the first to tick the boxes of zero emissions, autonomous, and crewless all at once, others have already made waves in this space. In December 2018, Rolls Royce and Finland’s state-run ferry operator, Finferries, launched the world’s first fully autonomous ferry with 80 passengers on board and the captain 31 miles away. Hellenic Shipping News reports that similar initiatives are now underway in Sweden and Norway, though they remain in testing. The United States military is also interested in the technology.

The interest in this industry coincides with a push from the International Maritime Organization (IMO) to lessen shipping emissions. The IMO has adopted a strategy to reduce CO2 emissions in transport work by 70% from 2008 to 2050 and to reduce greenhouse gas emissions by at least 50% in the same timeframe. Currently, CNN reports that shipping accounts for between 2.5% and 3% of the global greenhouse gas emissions.