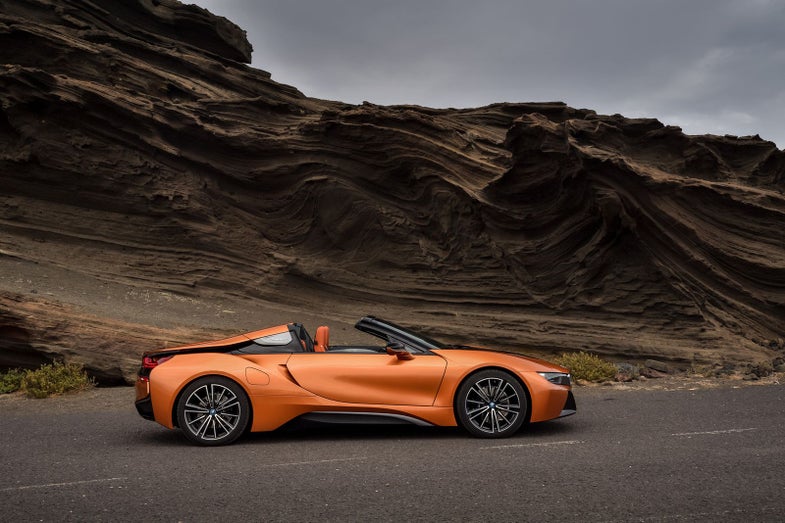 It’s crazy to think that text messages—the SMS staples of our collective social lives—have only been around for a quarter century. It was December 3rd, 1992 when the first true text traveled from a computer to a mobile device belonging to Richard Jarvis, the director of Vodaphone. If you’re ever on Jeopardy, it will probably pay off to know that the first text sent said, “Merry Christmas.” Here’s the rest of the stories you may have missed last week in your post-Thanksgiving haze.

The LA auto show didn’t bring with it any industry shakeups, but BMW showed off a convertible version of its electric i8 roadster, which is looking rather slick with a little taken off the top. Expect to pay about $150,000 for the privilege of letting it blow your hair back.

Tinder is rolling out a new feature in New York and LA called Super Likeable, which rolls out profiles it thinks match your tastes and personalities. It’s using AI to figure out who might be a match because robots are even replacing nagging phone calls from our parents to set us up on dates with people we don’t know.

Lego AR Studio is an app designed to bring augmented reality to its plastic brick creations. The tech is built on Apple’s ARKit platform and will include introductory sets like a train, a police station, and some Ninjago sets. This could be a real boon, especially for kids with bad imaginations like mine. My “multi-colored rectangles” never really captured the Lego magic.

The fastest smartphone camera around

The new Samsung W2018 flip phone isn’t headed for the USA just yet, but it does take the title of “fastest cameras lens on a smartphone,” at least for now. It has the biggest aperture at around f/1.5, which makes very little practical difference for when you’re taking pictures, but hey—a superlative is a superlative.

Desert Bus is an impossibly boring video game with no real point. It simulates the endless, tedious drive from Tucson, AZ to Las Vegas, NV. Literally nothing happens, and now there’s a version you can experience in virtual reality. The game itself has turned into something of a meme, and has even spawned marathon stream sessions, often for charity.

Bitcoin officially crossed the $11,000 mark, which technically means the Winklevoss twins have more than a billion dollars in the digital currency. Of course, the taxman has also started calling on some Bitcoin big dogs, so it will be interesting to see where things go from here.

Circa is a dedicated alarm clock that packs lots of very popular current sleep tech into one attractive box. The clock itself has a built-in, customizable touchscreen display, as well as a sound system with two speakers and a passive bass radiator. It comes with a sensor that goes under your mattress to track your movements and determine the best time during your sleep cycle to wake you up. It can also send you reminders when it’s time to go to bed, so you can totally ignore them and keep right on watching Netflix until an irresponsible time. You can pre-order from Kickstarter for about $210.

You can now get Microsoft’s Edge browser on iOS and Android devices. The replacement for the burning train wreck that was Internet Explorer lets Windows users take advantage of features like cross-platform browsing that starts on the PC and continues on mobile. I have enjoyed using Edge more than I thought I would. The healing process is happening.