Welcome To Your Future Energy-Efficient House

A visit to the Solar Decathlon, the battleground for affordable green housing 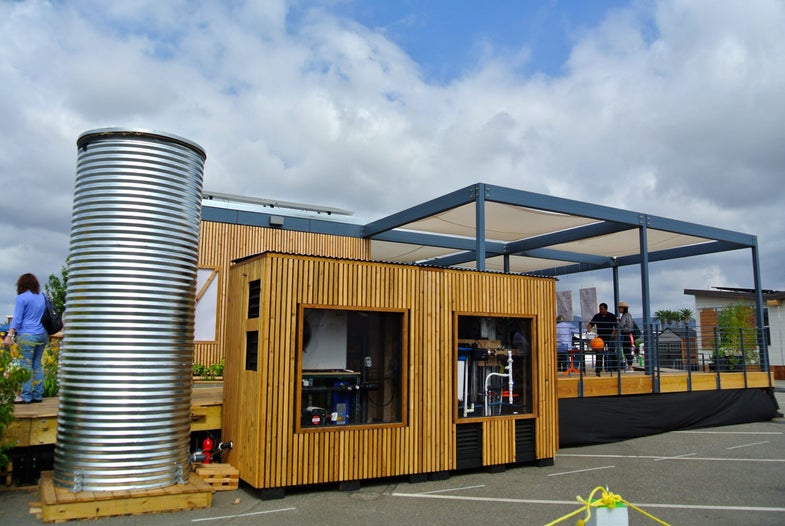 NexusHaus, a collaboration between the University of Texas at Austin and Germany's Technische Universitaet Muenchen, displays their HVAC and water systems at Solar Decathlon 2015. Sarah Scoles
SHARE

This weekend, it looked as if a Wizard of Oz-style tornado had blown through California’s Orange County Great Park, dropping 15 newly built houses in its wake. In this ad-hoc neighborhood, where the streets had names like Edison International Way and Schneider Electric Street, each house’s inhabitants wore matching shirts, smiled a lot, and handed out pamphlets. But this wasn’t a creepy planned community. It was the U.S. Department of Energy’s (DOE) Solar Decathlon competition, where college teams design and construct full-size houses that run entirely on solar power.

Each house was designed to be as energy-efficient as possible—on a budget of $250,000. As I stepped up to the SURE House, a student from Stevens Institute of Technology (SIT) in Hoboken, New Jersey—which took first place among the 15 colleges and universities participating in the decathlon—asked, “Would you like a tour?” (Since last December, SIT students have been documenting the progress of SURE House through their blog on the Popular Science website.) 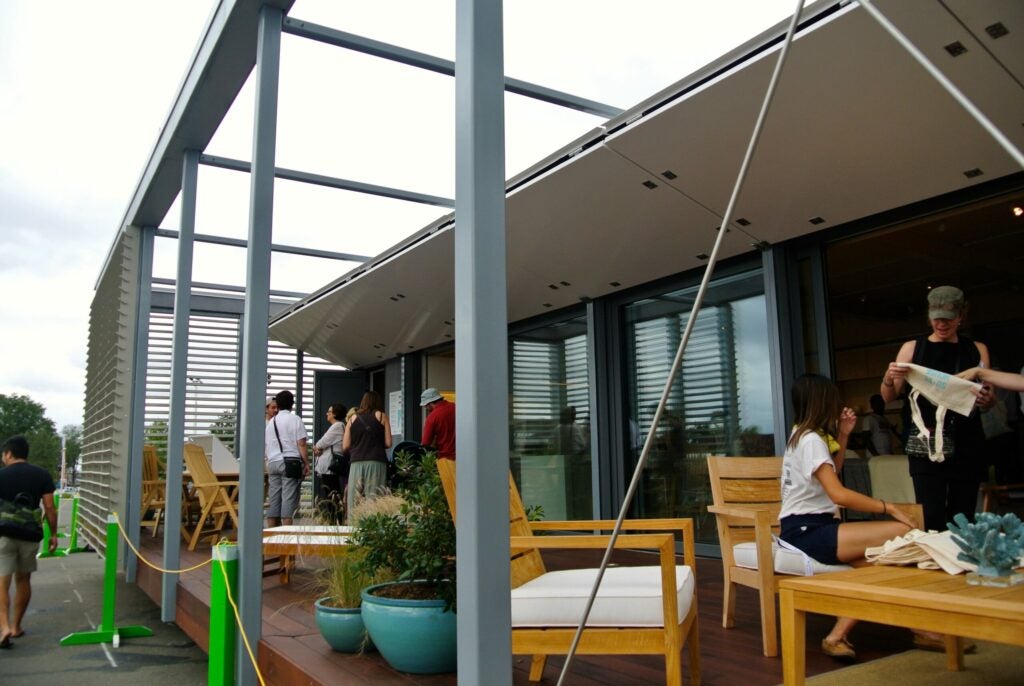 SURE House at the Solar Decathlon

Visitors to the competition-winning SURE House, created by students at the Stevens Institute of Technology in Hoboken, New Jersey, hang out on the porch with the storm shutter open and providing shade.

On my way into the structure, I passed a sign that proclaimed this house used 90 percent less power than a conventional one. Stepping up the ramp, I entered a structure inspired by the aftermath of Hurricane Sandy: SURE House can be flood-proofed in 45 minutes; its storm shutters quadruple as passive shading, solar panels, and debris resistors. Visitors lounged on couches and chatted on the porch, occasionally fiddling with a faucet and or talking to a Stevens student about the 9.63 kilowatt solar array that powers the house. If the visitors weren’t taking so many Instagram photos, you might think this was a real family’s house. And that’s the way each “tour” of a Solar Decathlon building goes: You enter, you learn why it’s great for both you and the environment, and then you make yourself at home.

Sizing Up The Competition

To meet the DOE’s criteria, students needed their houses to be “cost-effective, energy-efficient, and attractive.” In the Solar Decathlon competition, college students team up to design, build, and operate houses (actual houses, with furniture and framed pictures and everything) that produce as much or more power than they consume, while still keeping those inside comfortable. Inhabitants must be able to take hot showers, cook, clean, watch Netflix, and charge their electric cars.

“We’re a small school, but we accomplished something big.”

Decathletes have spent two years brainstorming, blueprinting, and then building the parts for their houses. Then, they had to disassemble the building, transport those parts to Irvine, California, and put them back together—in both form and function—in just nine days. Finally, on October 8, 2015, the Decathlon neighborhood opened to the public. For 11 days, people like me could just walk in and ask how the hot water works. The students feel excited to share their work with the public. After all, they’ve toiled over these buildings for two years. “It’s amazing to know we made it,” says Chesney Fries of the University of Drury and Crowder College team. “We’re a small school, but we accomplished something big.”

Judges did the same, checking to make sure the dishwashers reach 120 degrees Fahrenheit and the houses’ air temperatures don’t exceed 76 degrees F. Each house is judged on 10 different criteria worth 100 points apiece: architecture, market appeal, comfort zone, appliances, commuting, home life, communications, affordability, market appeal, and energy balance. Each category has a winner, and then the DOE names an overall champion.

The Results Are In

Stevens’ SURE House earned 951 of 1,000 points to take first place. “We’re all honored,” says team member Liz Lamb. “It’s a great feeling to share our work and have an impact. People are asking us about patents for the storm shutters, but I want this to be as readily available as possible.” During Hurricane Sandy, Lamb was among the first to lose power—and says she would love to live in the SURE House. 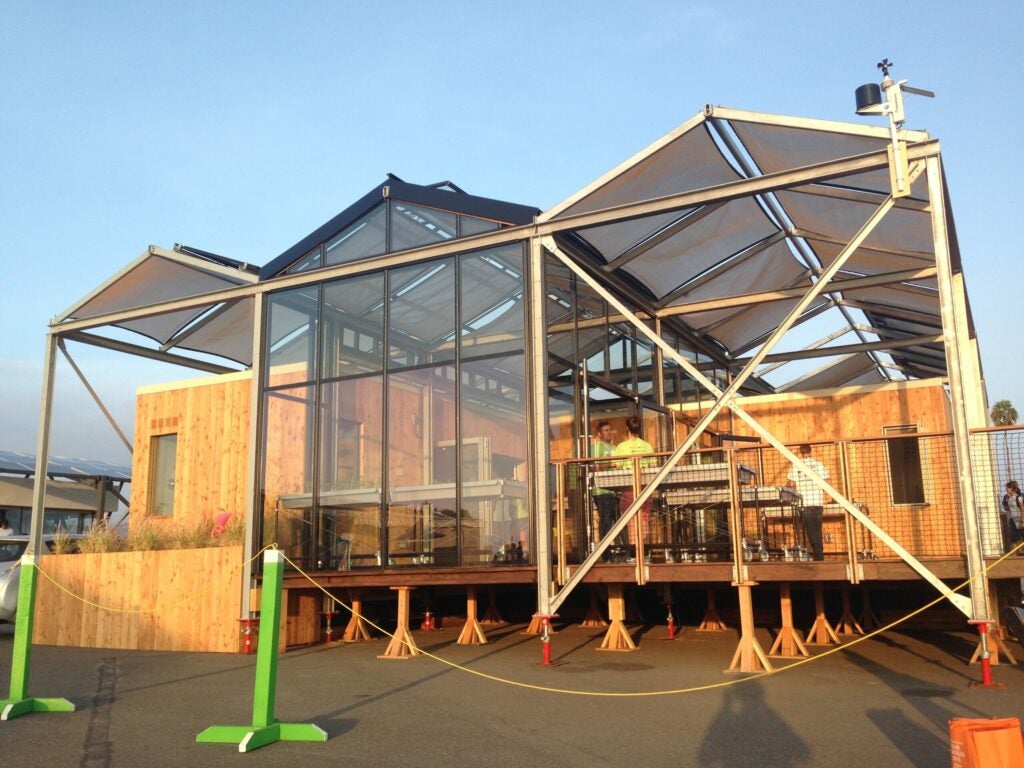 GRoW Home at the Solar Decathlon

The GRoW Home, from the University at Buffalo, The State University of New York, comes complete with a greenhouse to provide year-round vegetation.

Win or lose, all the teams brought something innovative to the table (or the garden or the HVAC system). And often, that innovation was related to their personal experiences or local geography. In the GRoW Home, for instance, students from the University at Buffalo created an in-home greenhouse, allowing inhabitants to grow greens even in northern New York’s harsh winters.

Students at the New York City College of Technology designed the DURA Home with urban settings in mind: Their structure has saw-toothed, vertical solar panels so additional units can be stacked on top.

The Aggie Sol Home, meanwhile, is designed for farmworkers in California’s Central Valley, the home of the University of California at Davis students. An outdoor entrance to the combined mudroom-shower leads directly to the hallway that separates bedrooms from communal space (all cooled by collected rainwater). “You can decide after you shower if you want to join the conversation or go read a book,” says Bobby Arlen. And all this comes with a $0 power bill.

Decathlon Director Richard King, who started the event in 2000, admires the students who created this net-zero neighborhood. “They’re all like-minded people,” he says. “They care about the Earth and sustainability and our future.” And according to him, these 15 houses show that a better energy future is within our reach. “You can do it,” he says. “It’s not that hard. We’re proving this technology works.”

On Saturday evening, clouds started to roll over the hills east of the park. Visitors trekked back to their cars, returning to their real homes on streets not named after power companies. But the Solar Decathletes stayed in their houses at Great Park, ready to weather any weather, functioning entirely off-the-grid with their stored solar power.

To see a full list of Solar Decathlon teams—and go on a virtual tour of their houses—click here.