The most important engineering innovations of 2019 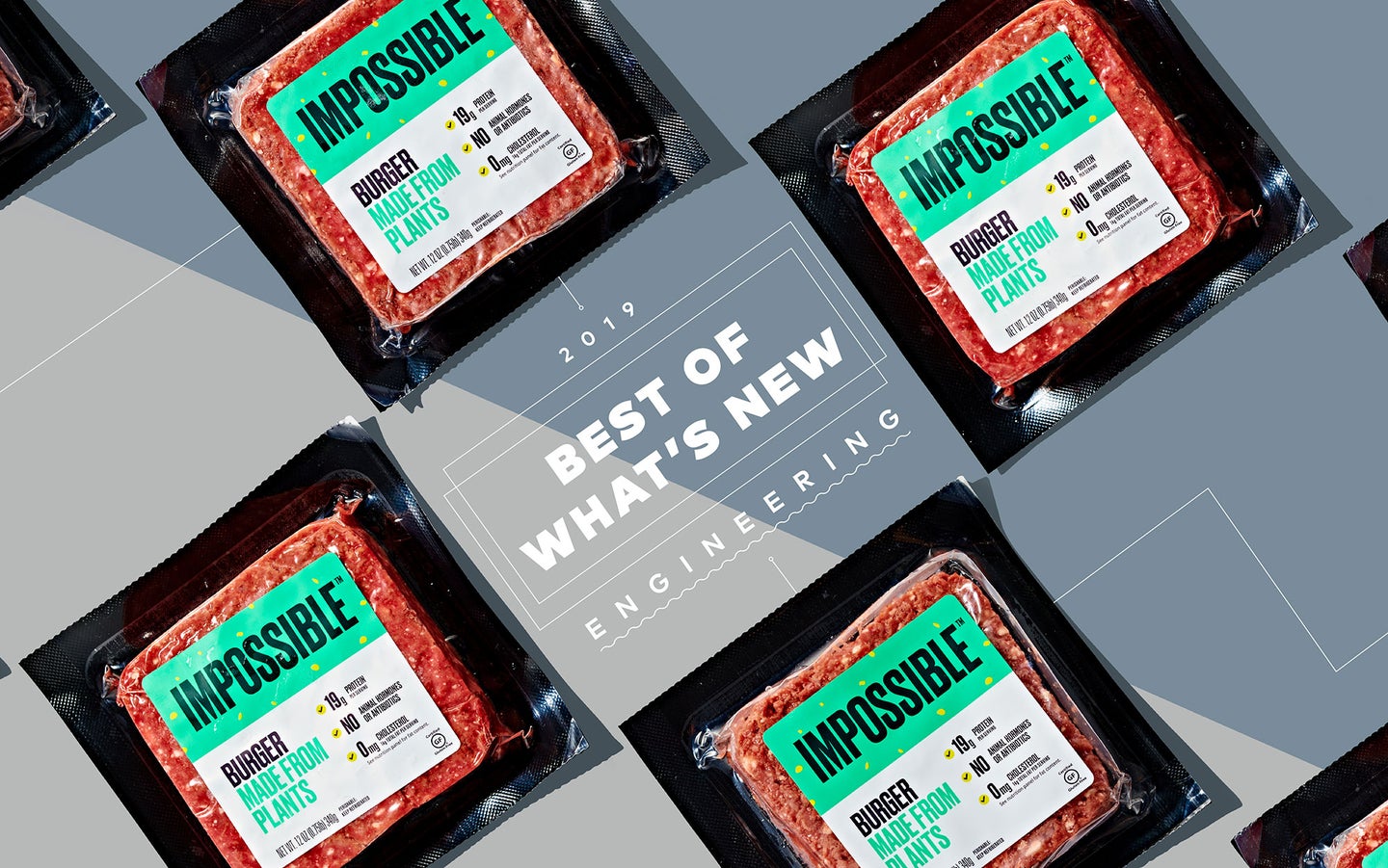 We may be tired of hearing about the climate crisis, but here’s the thing: It’s still the most important challenge we face today. The good news is, lots of companies are taking novel tacks to make smarter use of the planet’s finite resources. Modernized sails might soon give the shipping industry a boost in fuel economy, and mechanical trees will shortly be scrubbing carbon dioxide from the air. Consumers can even pitch in by hopping on the fake-meat train or buying jeans dyed with greener indigo. Of course, this year’s winning engineers aren’t all just inventing new forms of damage control—there are a few not-so-simple pleasures on the list, for Star Wars buffs and robot fiends alike. 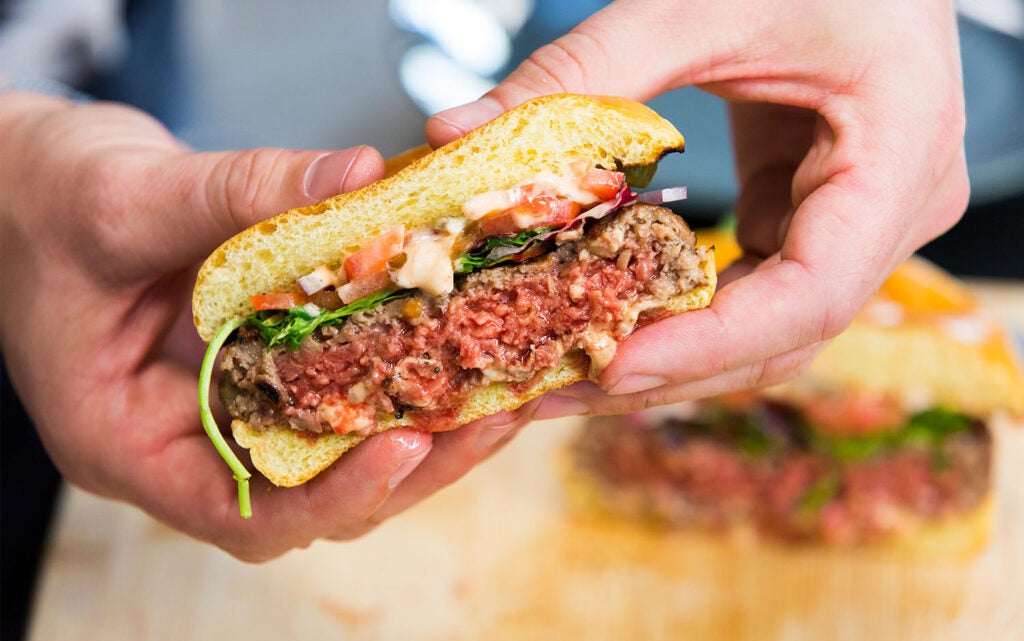 A rare revolution in fake meat.

It’s hard to get a meat lover to truly enjoy a veggie burger, but the future of our planet depends on people eating fewer cows and more plants. Sure, we could scarf more beans and legumes, but Impossible Foods knows that when you’re craving a hamburger, only beef—or rather, heme, the iron-containing bit of hemoglobin—will do. Heme molecules are a large part of what gives meat its meaty flavor, so engineers at the California-based company created yeast cells that produce large quantities of the stuff. Their 2.0 version, available in some groceries and fast-food chains, blends soy and potato proteins (no more wheat, making it gluten-free) for texture, with coconut and sunflower oils to mimic beef’s fattiness. In the end it’s about as healthy as a real burger; it even has the same iron and protein content. The result is a patty so convincing, longtime vegetarians might get grossed out. And really, that might be what it takes to convert meat-loving Americans to a more sustainable diet. 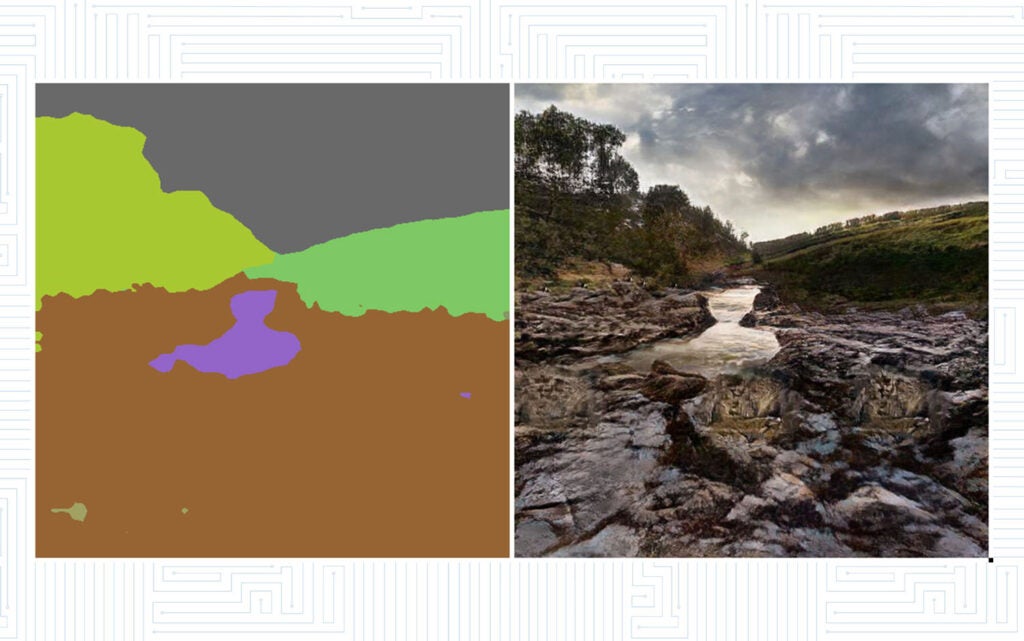 Gaming worlds in an instant.

Say you’re a video-game designer, and you need to generate a virtual landscape featuring a still lake with a snowcapped mountain. It would take ages to make that image by hand, but with Nvidia’s GauGAN software, you can essentially paint the basic shapes, then let its neural network render the rest in photo-realistic detail. The consumer preview version just does stills (and you’ll have to insert any character art yourself), but gaming giant Nvidia has already created a demo using solely AI-generated graphics. They hope to shave thousands of hours off development time for future designers. 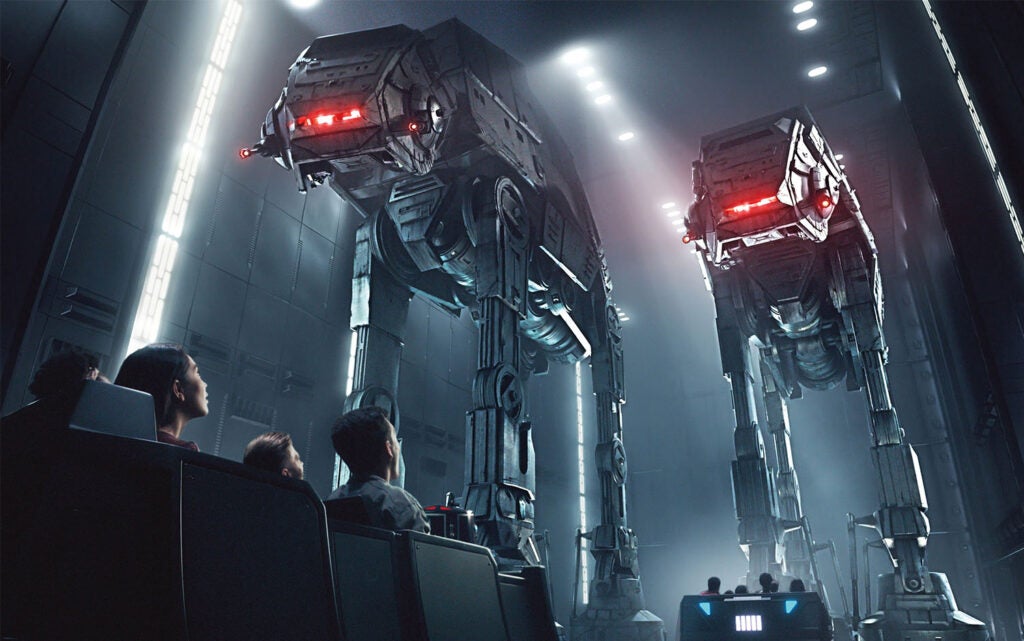 The Imagineers behind Disneyland would like you to forget that you’re in Disneyland. Their newest 14-acre stretch in Anaheim, California, which opened this May, instead places you on the built-from-scratch planet of Batuu, where you can share the streets with animatronic droids and whizzing lasers. Pilot the Millennium Falcon from a cockpit simulator or head off-planet in trackless escape pods that make you feel like you’re plummeting out of a Star Destroyer. With an amalgam of architecture, faux habitats, and fictitious languages, you’ll feel as if you’ve walked straight into the Star Wars universe. 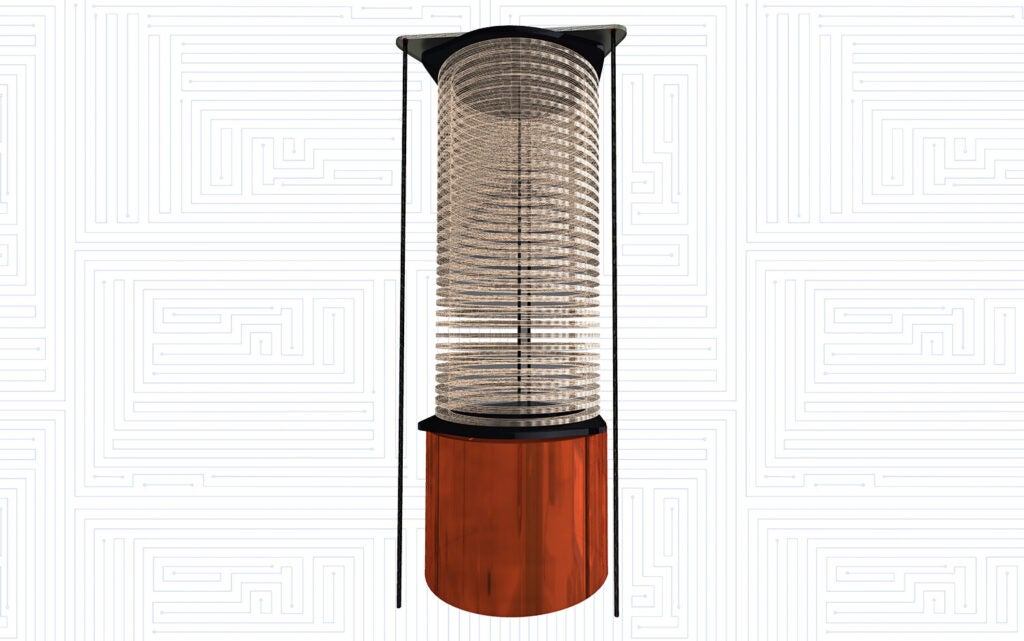 A forest of 1,200 mechanical “trees,” designed by Silicon Kingdom Holdings and Arizona State University scientists, is poised to pull more carbon dioxide out of the air than any human-made endeavor before it. Instead of wood, these metal columns (the specific material remains under wraps) use discs made of sorbent, which can absorb three times its weight in carbon dioxide as the wind blows through it. A cluster of 12 can suck a metric ton of the gas out of the atmosphere every day; a full lot, like the pilot one SKH is planning to install in California, can remove up to 36,500 metric tons annually. That’s nearly 1,844 American households’ worth of emissions. 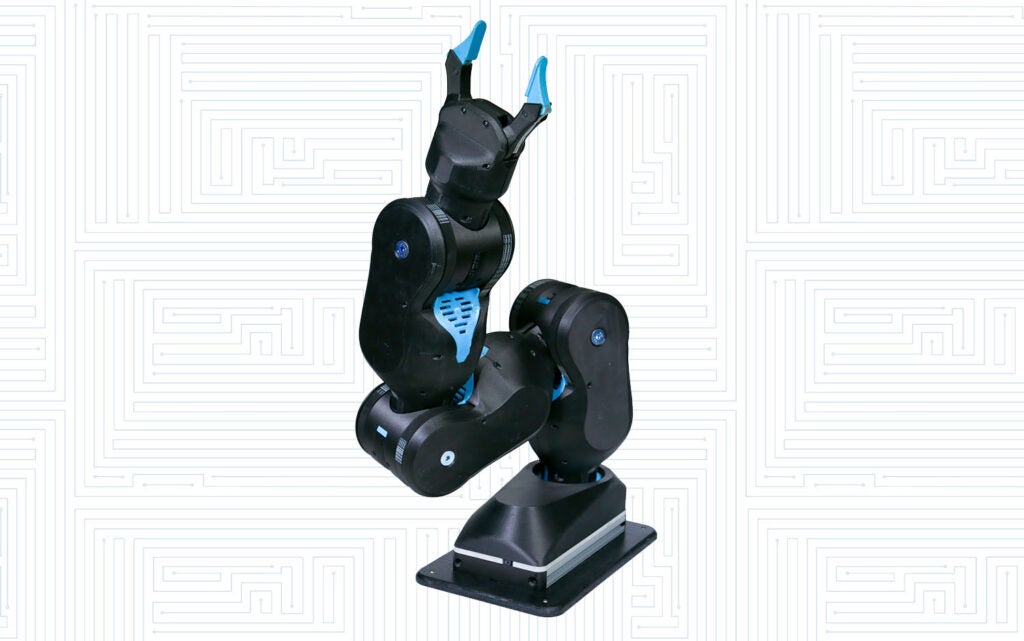 A robotic arm you could actually afford.

For less than the cost of a couple of laptops, anyone can bring home a robotic arm with built-in algorithms that train it to fold laundry, clean the bathroom, or unload a dishwasher. What the bulky, low-powered arm lacks in precision, it makes up for it with uncanny, humanlike perception: It uses visual and tactile sensors to judge distances and apply gentle pressure through grippers. At the moment, Blue is exclusive to UC Berkeley labs, but it’s projected to ship to households in the next few years, where it might someday have as many uses as smartphones do today. 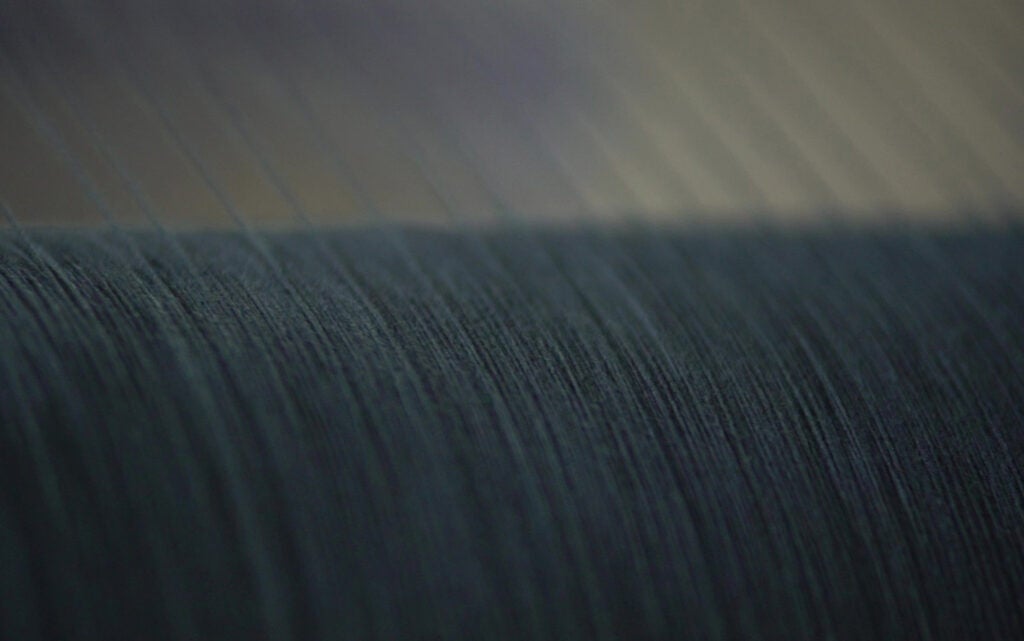 It’s been decades since denim’s been dyed with plant-based indigo. Today, manufacturers use a synthetic powdered version that requires 100 times its weight in petroleum to produce. Fashion biotech company Tinctorium’s dye, on the other hand, comes from genetically edited E. coli bacteria, which take in sugar and release a molecular precursor to indigo. The substance is then combined with an enzyme to produce the actual chemical pigment. So far, it’s been used to color a scarf and cotton yarn; next year, Tinctorium will test it on pants, and after that, hopefully, those mom jeans you’ve got your eye on. 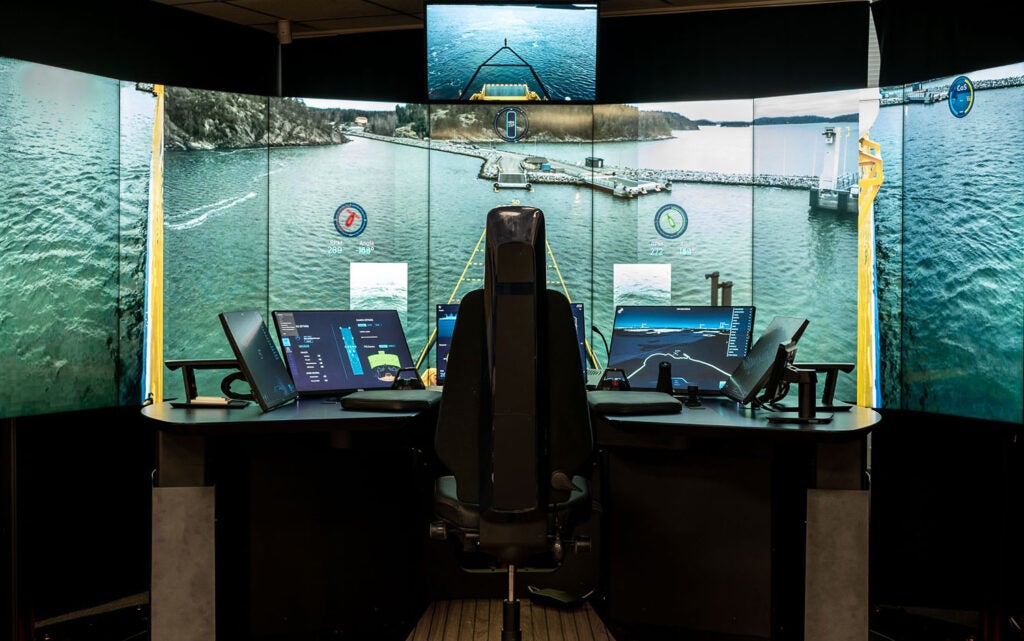 On December 3, 2018, 80 passengers rode a ferry with no crew between two islands in a Finnish archipelago. The captain sat 31 miles away, on call in case of an emergency. By running point-to-point trips that don’t require complex directions, ferries could be the perfect incursion into an autonomous-driving world. The SVAN module, which uses lasers, radar, and computer vision to navigate waters, can retrofit onto any ship, which could help the shipping industry cut down on personnel costs. More importantly, the system could prevent the 75 to 95 percent of marine accidents that occur from human-operator error. 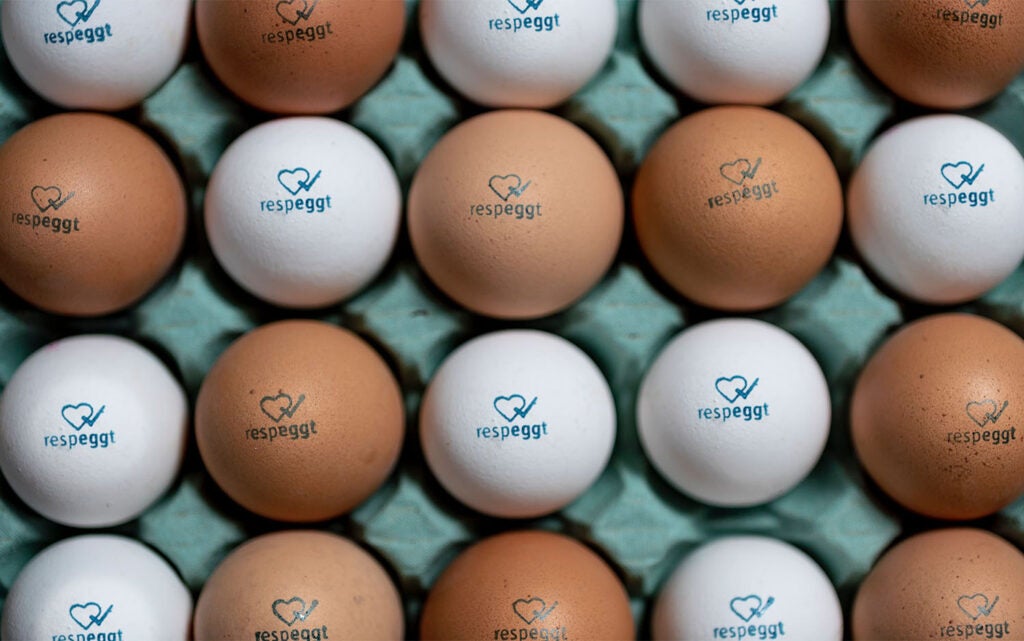 Male chicks are fairly useless to the poultry industry: They can’t lay eggs or fatten up quickly enough to churn out 5-cent wings, so farmers slaughter 6 billion of them for naught each year. Respeggt found a way around that: punch a 0.3-millimeter-wide hole in a shell, suck up a drop of embryonic urine, and test for estrone sulfate, a hormone only female chicks produce. Male embryos then get processed into animal feed, while ladies head to the hatchery. Berliners can already get cartons with the Respeggt seal, but the rest of the world is still on the waiting list. 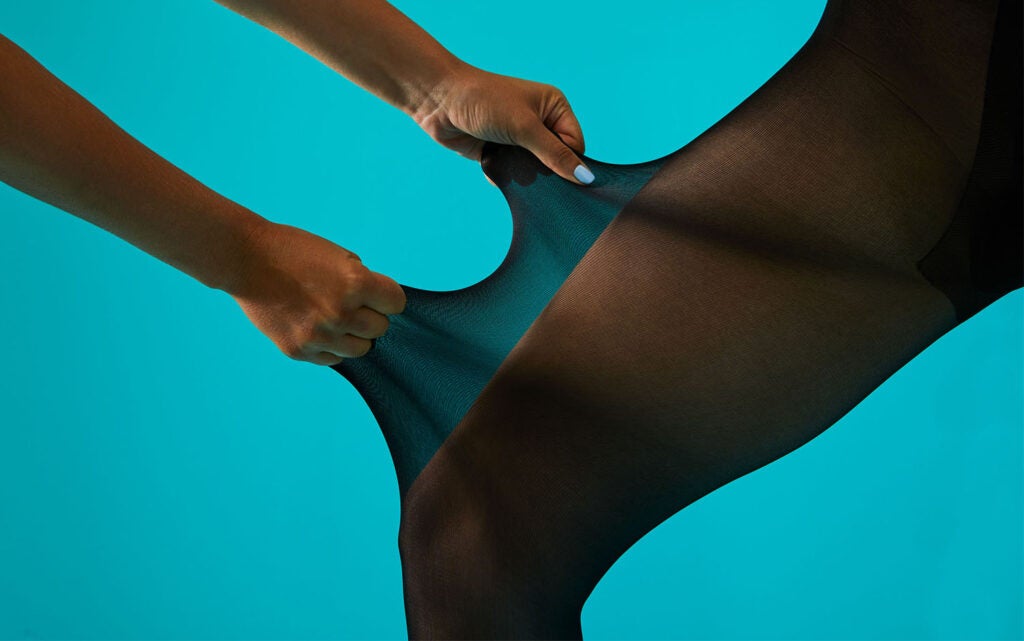 Flimsy bits of lingerie that you trash and replace every other week, sheer tights are bound to rip—unless they’re made from a featherweight polymer with a tensile strength rivaling that of steel. Sheertex’s proprietary fibers are spun from some of the same stuff in climbing ropes and bulletproof vests; they’re so strong, they require custom knitting machines (the standard ones broke from all the pressure). You could shove a high heel into the things without tearing them, making them a far better investment than the more disposable alternative—both for you and the planet. 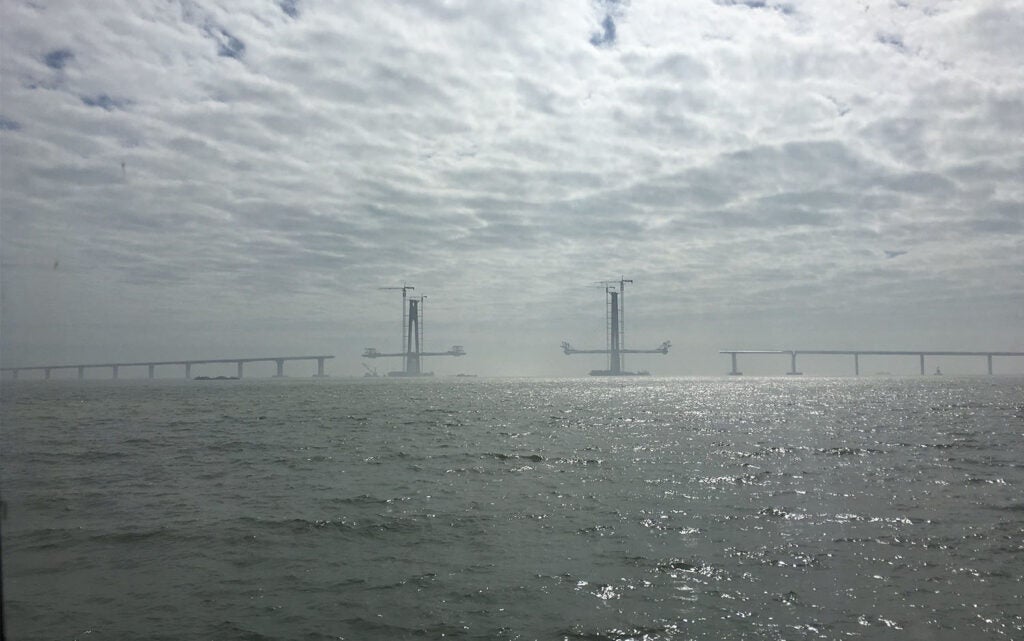 The longest sea crossing on the planet.

A map of the HZMB looks almost like an amphibious racetrack. The 18-plus-mile roadway takes drivers from Macau and Zhuhai off the coast of China, across the bay to Hong Kong—or vice versa. The cars must cross two border checks and two artificial islands, then speed through an underwater tunnel while container ships float overhead. The entire bridge can withstand 125-mile-per-hour winds (that typhoon life) and magnitude 8 earthquake tremors. Other than those terrors, it makes for a leisurely ride over the South China Sea. 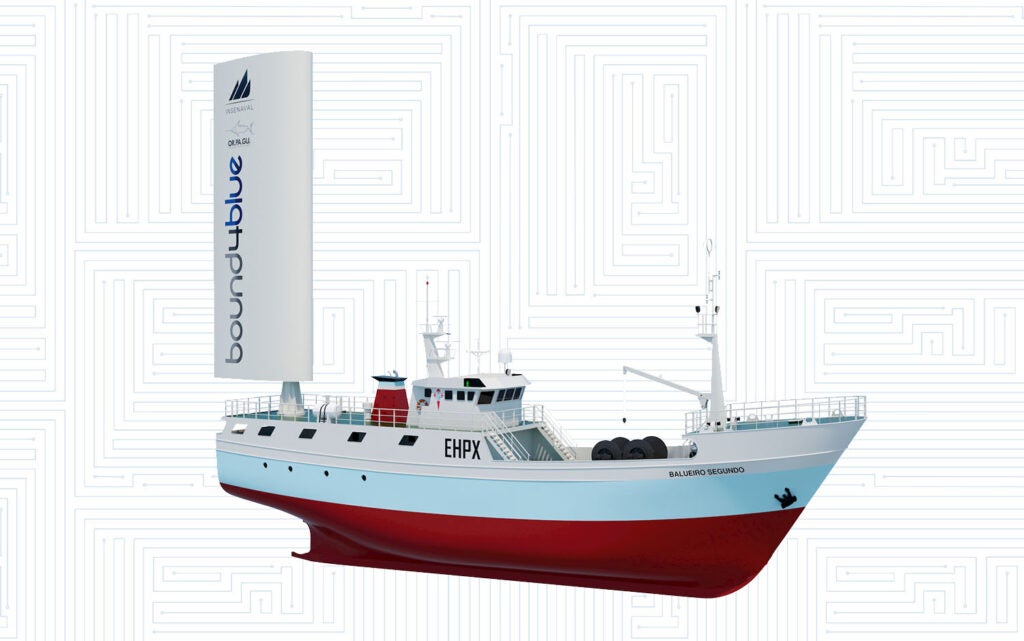 These sleek wingsails look nothing like their canvas forebears—and that’s a good thing. Their tall, broad profile enables them to capture wind from more directions, then shunt that energy into the motor. They won’t power an entire journey, but on average, they’ll reduce a vessel’s fuel consumption by 30 percent. If even a small portion of the world’s roughly 90,000 ships switched over, it could cut a significant chunk out of the more than 5 million barrels of bunker fuel that vessels burn through daily. And since the foldable sails can be retrofitted and run autonomously, they can help out on container ships and passenger boats alike. 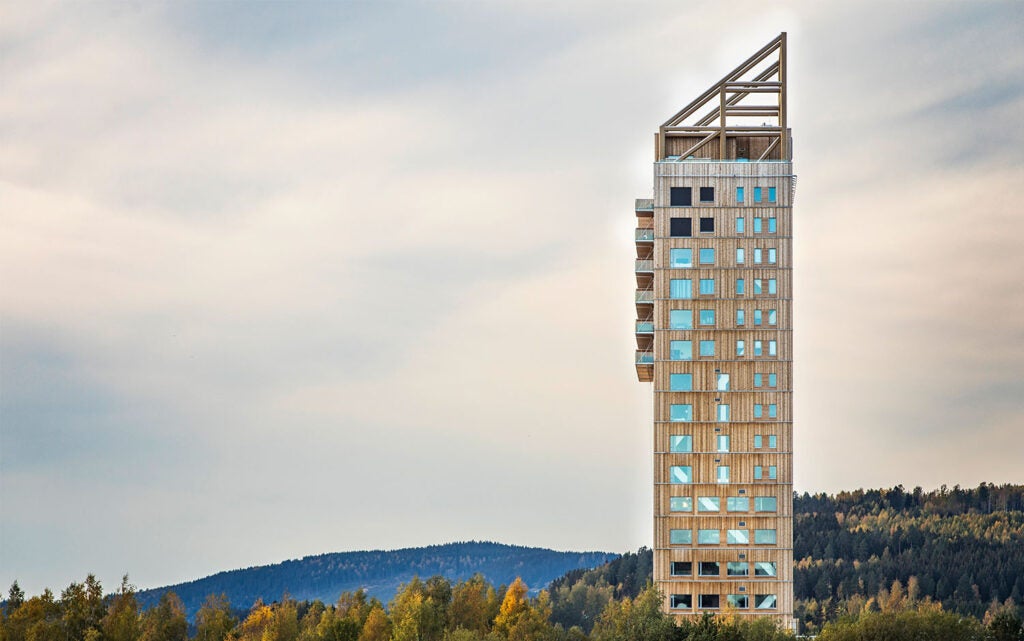 Most people might think of steel, concrete, and glass when they think of a quintessential skyscraper. But Mjøsa Tower, designed by Voll Arkitekter, defies that image: Its 18 stories are entirely wood. The Norwegian marvel, which holds luxury condos and sweeping offices, is made of laminated timber, a material of thin sheets of glued-together lumber. The construction adds fire resistance, and unlike steel, retains its structural integrity in blazes. Its renewable material also allows high-rise owners to slash their carbon footprint, and the lack of concrete reduces dependence on sand, a surprisingly limited resource.