Can't wait for the Intel ISEF or Google Science Fair? Here's how to find and succeed in national science fairs before you even get to high school. 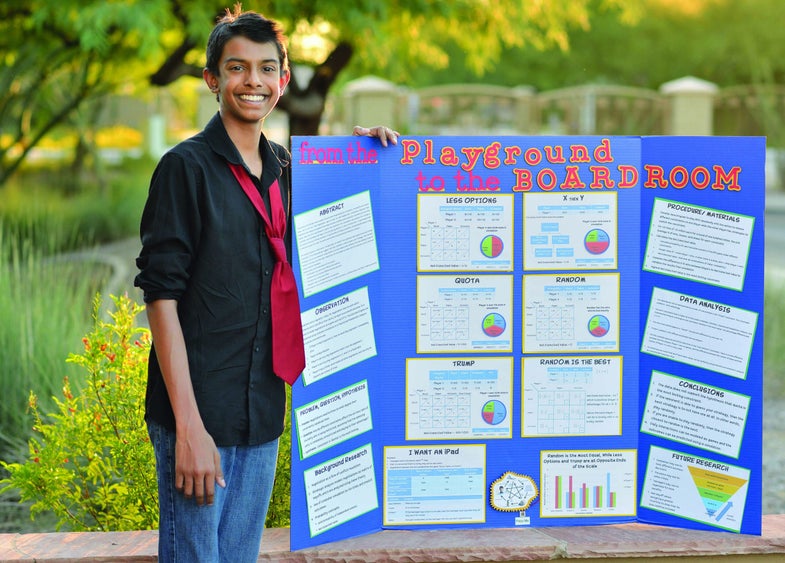 Why let the high school guys and girls have have all the fun?

Last month, Popular Science published tips for winning two of the world’s most prestigious science fairs, the Google Science Fair and the Intel International Science and Engineering Fair. Both fairs are for high school students, but that doesn’t mean you can’t enjoy a similar experience if you’re still in eighth grade. There are many major, national fairs for those in middle school. Not sure where to start? Check out which fairs sent students to the White House in 2012.

Just as in high school, middle school science fairs allow entrants to meet other students who share their passions and learn science skills beyond what they’re exposed to in school. Large national fairs may offer winners cash or scholarships.

To help you get the most out of your fair, we asked for tips from judges and finalists from two national science competitions for middle schoolers, Broadcom MASTERS (Math, Applied Science, Technology and Engineering for Rising Stars) and the Discovery Education 3M Young Scientist Challenge.

The expectations for middle school science fair entrants are a little different from their high school peers. One major difference we found is that both Broadcom MASTERS and the Discovery Education 3M Young Scientist Challenge ask students to compete in pairs or groups to answer problems they’ve never seen before and that don’t have anything to do with their own projects. We’ll explain more below, and show you how you can prepare.

In addition, the Discovery 3M Education Young Scientist Challenge pairs finalists with 3M scientists who help the students refine their ideas over a summer before final judging. Entrants’ initial application are two-minute videos explaining their idea.

Here are the people we talked to:

Popular Science: Is it important for the entrants to look at a science question no one has answered before? The high school science fair judges emphasized this a lot.

Bill Wallace: At the high school level, the expectation is that the student can have a much greater knowledge of what’s already known. Whereas for a middle school child to know if the question is novel? It’s enough that they think it’s novel and that they apply their own ideas to solving that problem. Whether someone else has done that at a professional level matters less.

Srijay Kasturi: My mentor helped me to do patent searches because one idea I had was patented. He helped me craft my idea into a new, better idea that wasn’t patented.

Popular Science: What do judges look for in projects?

Susan Baker: We really like to see data. A replicate of three? Okay, that’s perfectly fine in your average local science fair. It’s probably not going to cut it at Broadcom MASTERS. We like to see data and a lot of it.

We look for a sophistication. For example, maybe they get their initial answer and maybe that prompts another question. That shows the kid has an understanding of the result that they got and can take it to the next step.

Having a personal reason for doing this project counts a lot. One year, there was a kid who liked natural Christmas trees and his father was tired of cleaning up the needles that dropped off the pine trees. The father was going to get an artificial tree. The kid went out and he got three different kinds of trees and checked the water and counted, basically, how many pine needles fell off each tree. He counted thousands of needles. He found one kind of tree doesn’t shed a lot of needles.

There was a personal reason, he did the science to come up with an answer, and he gets his Christmas tree.

Cindy Moss: We’re looking for kids to come up with some kind of innovative solution to a problem in their life. We really just look at: Does the kid have a basic understanding of what the problem is? Is their idea something creative? We want these ideas to be something that matters to kid.

Srijay Kasturi: But the best videos, in my opinion, are the ones that focus more on the invention and less on you. 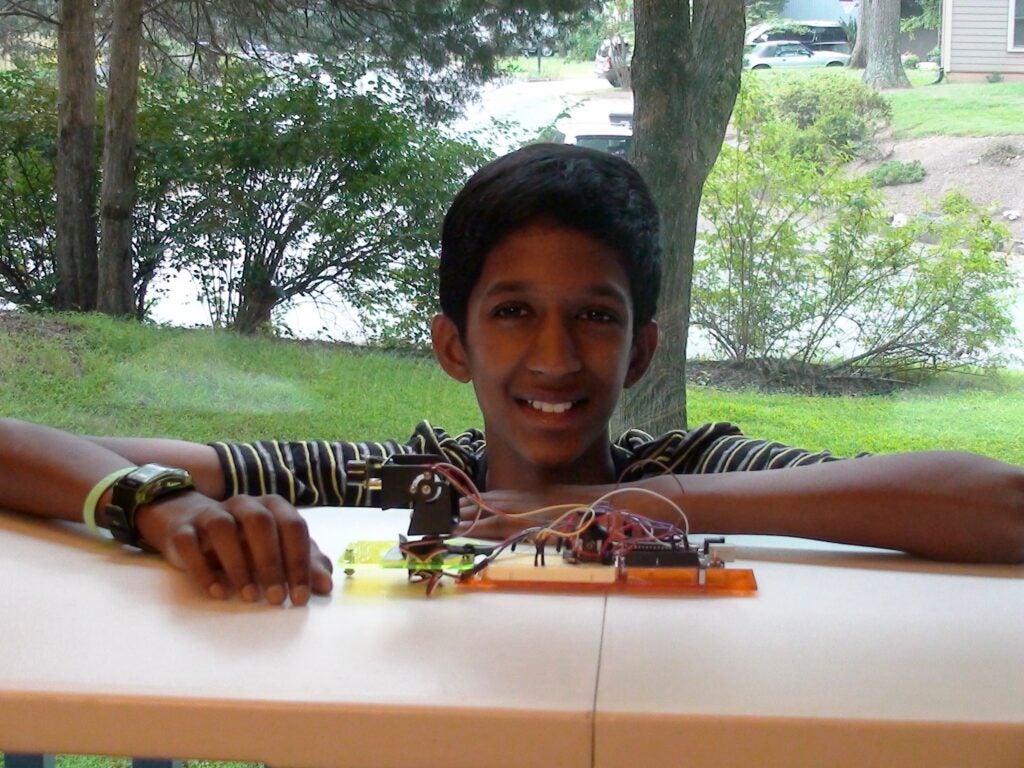 Srijay Kasturi with His Invention

Kasturi’s device is a tripod accessory that holds a camera, automatically finds nearby objects, and then centers the camera on the object.

Popular Science: Tell me about the portion of the competition where entrants answer new science questions that aren’t related to their projects.

Susan Baker: Their science fair project is basically what gets them in the door. The rest of it is how they work together, how they solve things, how they think. Do they think in a scientific fashion?

Bill Wallace: What we try to do is push them where the applicant doesn’t know the answer but we’d like to see how they think it through. They should think aloud.

Cindy Moss: We want people to be willing to listen to others’ ideas and not be afraid of prototyping and failing. I like the definition of fail as the first attempt at learning. You need to try things again and again.

Popular Science: How can entrants prepare for all this questioning?

Bill Wallace: Be broadly interested in what science is about. Don’t specialize already and read outside what your class is. Then you have a broad background that is going to help you in terms of whatever the challenge is you’re given. 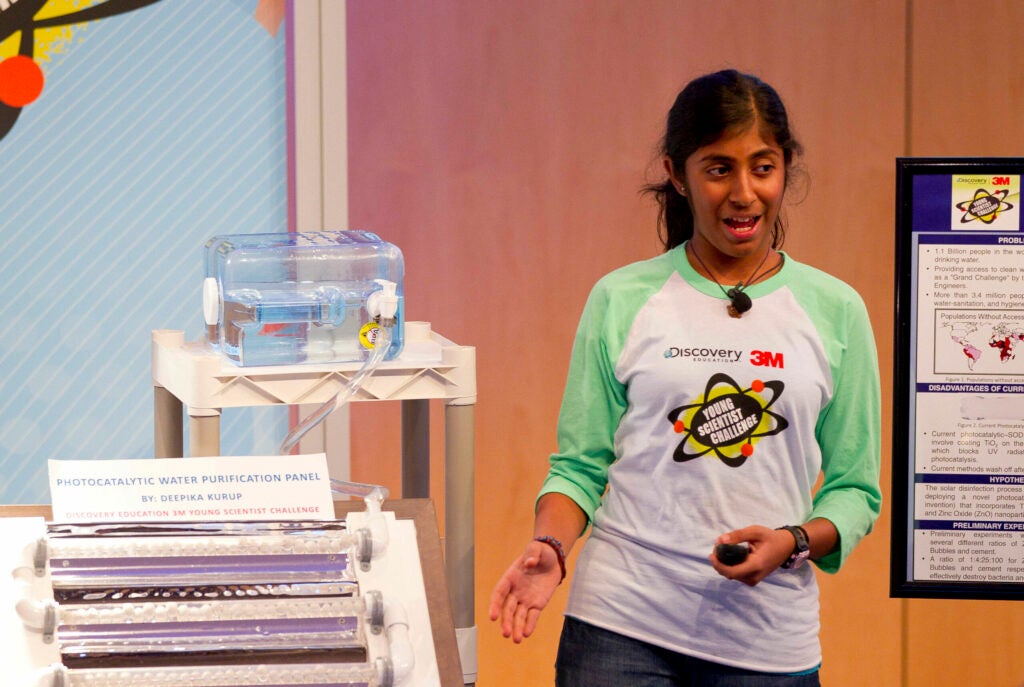