The First Tanks Went To War 100 Years Ago Today 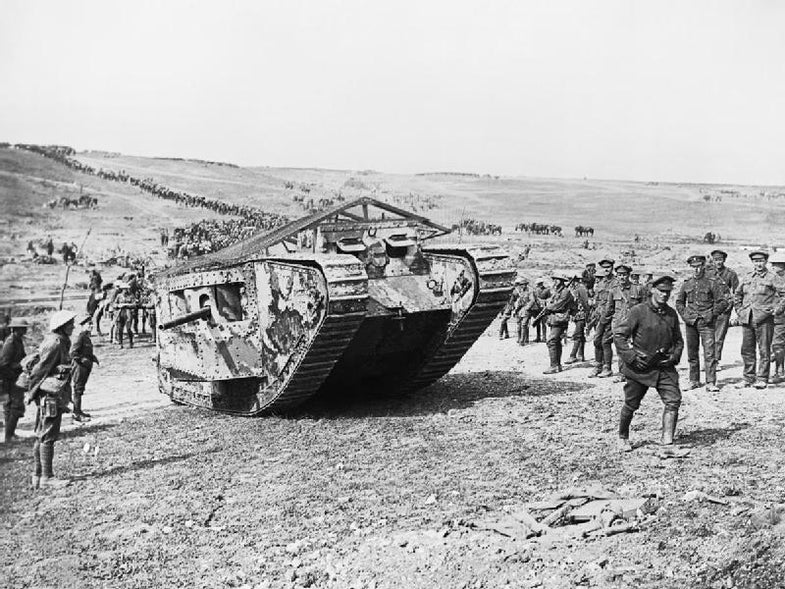 World War I was a bloody mess. Spurred by advances in defensive weapons, like machine guns, barbed wire, and artillery, much of the Great War’s western front was a muddy hellscape of trenches, explosions, and mostly static lines.

The Battle of Verdun, which started in February of 1916 and lasted for nine months, resulted in hundred of thousands of dead, and left unexploded weapons around the village of Verdun, some of which are still there to this day.

The existing technology of that war lent itself to defensive stalemates. To change the war, military commanders hoped for a technology that could cross trenches, withstand rifle and machine gun fire, and protect advancing troops on foot. The result was the tank, which had its debut at the Battle of the Somme on September 15th, 1916 — 100 years ago today.

A British invention, the first tanks were large, slow, and a world different from the vehicles we see today. I’m going to let the British Army explain it best:

The earliest appearance of tanks in Popular Science comes from the December 1918 issue, in “German Monsters–Clumsy Copies of the French Tanks.” The tanks used by Germany were heavy, slow, poorly designed, and weak to all kinds of weapons, including rifle fire. By the start of the next World War, however, German tanks were powerful, fast, armored and deadly machines, which enabled a style of fast attack that shaped not just World War II, but how nations after the war envisioned future wars.

Popular Science documented the evolution in tanks, that thunder before the blitz, from slow novelty to deadly weapon in the interwar years, a selection of which can be found in “The Rise Of The Tank Before World War II.”

As for the tank evolution over a full 100 years, the British Army is again happy to tell that story in a video that is as much historical timeline as modern military infomercial. Watch below: