Building a car that's also a boat is hard, but their numbers are increasing. 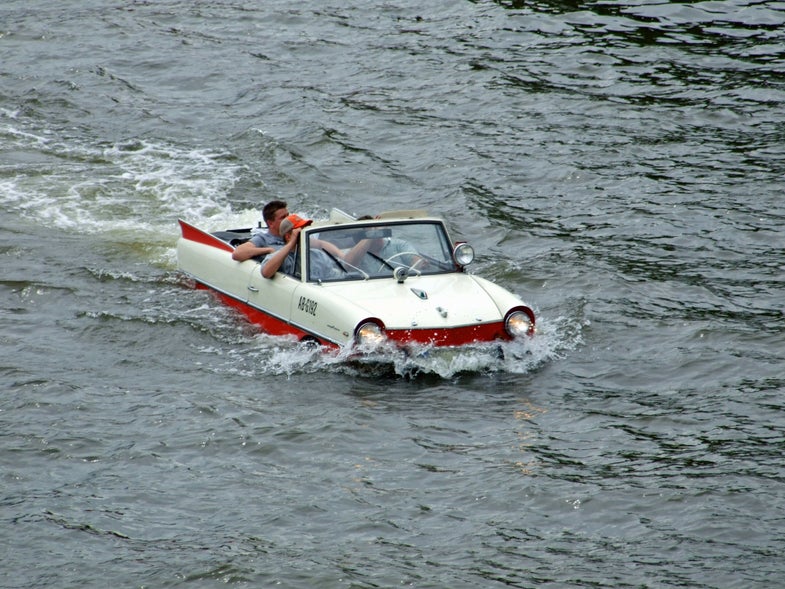 There’s a hard-scrabble serenity to Texas Hill Country. The rustling of live oak trees and the meandering clip-clop of furry Herefordshire cattle crossing the road all that break the windy silence. But that wasn’t always true. When Stonewall, Texas native Lyndon Baines Johnson was still alive, the former president was always ready to disrupt the peace, especially when behind the wheel of his lagoon blue convertible.

High-tailing around his property in the German-made contraption, Johnson would reportedly point the car downhill toward the Pedernales River, yelling to passengers that the brakes had gone—the car couldn’t stop. It was only when they hit the water, hearts in their mouths, that his guests learned the truth: Johnson’s little craft was built for rubble and waves.

Between 1961 and 1968, Berlin mechanics built 3,878 Amphicars, which were gobbled up by aquaphilic Americans including LBJ. Though the run was limited—Ford averages 2,472 pickups sales every day—it remains the largest production of amphibious cars to date. Since its post-war peak, the fantasy of floating cars in every dock and driveway has faded, diminished by engineering issues and other impracticalities. But experts say this truly all-terrain vehicle could soon see better days.

The first amphibious cars were built by the Nazis. Volkswagen produced 14,265 Schwimmwagens (translation: swimming wagons!) between 1942 and 1944. They never saw much action, but their mere existence was enough to inspire hybridization campaigns in other nations. The United States, for example, began production on the six-wheeled DUKW. These hulking machines, referred to as “the ducks,” later made their way to military surplus sales. Some were purchased by Mel Flath of Wisconsin, who filled them with tourists, and later took his “duck tour” company nationwide.

In the 1960s, the first amphibious car for civilians rolled off the lot. The Amphicar, with a capital A, was a sleek and effective vehicle, according to Scott Brunner, president of Gordon Imports, a major Amphicar parts supplier. “There’s a lever on the floor for the propeller drive, so you just shift it into forward, let up on the clutch, and there you go,” he says. As long as he pulled the bilge plug in the bottom of the hull closed, and tightened the extra latch in each door, Johnson could pull off his little prank and remain waterproof. “When you’re going to come back out, you can re-engage the four-speed lever into first, and let the propeller go,” Brunner adds. “When the wheels hit the ground, you just drive out.”

There was just one hitch: The half-boats were built, insensibly, from steel, which rusts with extended exposure to water. By the 1970s and 80s, many Amphicars had fallen into disrepair. “Of the less than 4,000 that were manufactured, probably half of those are still around, in all conditions,” Brunner says. “As far as usable ones, it’s got to be less than 1,000.”

Though it’s counterintuitive, the number of usable Amphicars actually increases every year. “For a long time, the cars weren’t worth that much. But nowadays, the value’s gone up,” Brunner says. “People are always finding them in a barn or a back field… and now they’re being restored and brought back into usability.” Replacing parts with more modern materials, along with regular paint jobs and oil, can stave off rust. But some have given up on steel, and turned to modern amphibious cars for their boundary-breaking needs.

But boundary breaking has a price. In the United States, these dual-purpose jalopies seem to evade regulatory agencies on land and water. Since 1999, 41 people have died in duck boat incidents in the United States and Canada. This has been attributed to a lack of oversight, and some peculiarities of their design. Seat belts, for example, save hundreds of landlubbers each year, but restraints can be deadly in a boat, preventing passengers from escaping a capsized craft. Similarly, many duck boats have a canopy cover to shield tourists from the sun. The only problem is, the soft roof can act like a net when overturned in water, trapping customers even when they’re wearing life vests.

Tim Dutton is a U.K.-based manufacturer who’s been bringing his own amphibious designs to the street since 1989. When I asked why we weren’t all driving boat-cars around, he says it had nothing to do with technology. “We’ve pretty well sorted it out,” he told me. Unlike their mid-century predecessors, Dutton’s vehicles are made from lightweight but durable fiberglass, a mainstay of contemporary boat-building. Modern rubbers and quality plastics fill in the gaps. And the 8-inch propeller is enclosed like the fan in a jet ski.

One thing that hasn’t changed from President Johnson’s time to ours is speed. On land, the Amphicar went 70 miles an hour, but in water, it maxed out around 6 miles an hour, or 5 knots. “The speed now is absolutely identical,” Dutton says of his crafts. That has to do with the body of the boat. Planing hulls are the fastest crafts, allowing captains to cruise across the surface of the water. Semi-displacement hulls sit in the middle. And displacement hulls, common to barges and amphibious cars, sit low in the water—sturdy but comparatively slow. “No matter how big an engine you put in a displacement hull, it’ll only go 6 miles per hour,” Dutton says.

Competitors in the amphicar space have their own tactics, with mixed results. Mike Ryan of SeaRoader has turned existing car bodies, from trucks to Lamborghinis, into water-worthy vehicles—and viral eBay sensations. From 2002 to 2003, a New Zealand-based company produced the Gibbs Aquada to great acclaim. With submerged speeds of 31 miles per hour, it enabled eccentric British billionaire Richard Branson to set a new record for crossing the English Channel. (He went from coast to coast in 1 hour 40 minutes and 6 seconds.) But, like the 2004 Swiss-made Rinspeed Splash, the Aquada was a limited concept car, and never made it to mass-production.

Machinery purists continue to criticize four-wheel boats like they’re flying cars. At the same time, Great Lakes residents and future-minded gearheads persist in promoting them. “My old boss, he always hated when people said they were not a very good car and not a very good boat,” Brunner the auto parts supplier says. But, because of the vehicle’s “mixed design criteria, there were compromises.” Just look at the shape of the vehicle. “The amphicar, for all intents and purposes, is the shape of a brick—an attractive brick,” Dutton says. “With boats, you want a nice point to split the water, but you can’t have a nice point on a car, because you’d go around harpooning pedestrians.”

Trade-offs aside, Dutton and Brunner believe amphibious cars are a feat of engineering—and totally ready to ferry. (Dutton bets his life on it; the inventor can’t swim, but trusts his life to these waterproof rides all the time.) So that leaves just one explanation for the aquatic car’s failure to dominate: few people actually need a two-in-one machine.

Each year, Dutton’s company sells about 10 submersible vehicles. About half are purchased for industry uses—scientists might use them for watershed research, for example—and the other half are for pure fun. Tallied up with restored Amphicars and hobby projects, the total number of usable waterproof rods indicates just a few hundred people feel the urge to (safely) drive their car into a river at any given moment.

As for the rest of us, we’re managing to make do with separate cars and boat—at least for now. “We’ll all have them, with climate change,” Dutton predicts. “When everywhere has three feet of sea level rise, they’ll make a lot of sense.”