Disney is turning to robots to pull off dangerous aerial feats

'Stickman' was just the start. 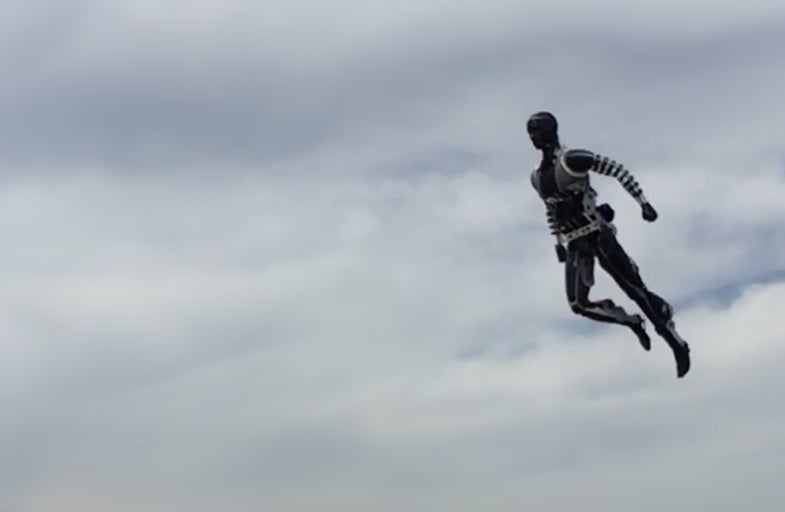 Have you heard of Stickman? It’s a 7-foot-tall swinging robot performer who weighs just around 40 pounds, can execute backflips, and then decide on his own when to untuck and land flat on its back.

First revealed in May, Stickman was an early version of a fearless robotic performer, while the newest artificial acrobatic figure that Disney has shown off is in a category they call “Stuntronics.” They’re building flying machines like these for a couple reasons. First, these robots can achieve feats that would be too difficult or dangerous for a human to do. What’s more, machines can perform over and over without getting tired. (That’s a good reason for a company to use robotics: For example, at a General Motors foundry in Michigan, a large robot pours engine blocks out of burning hot liquid aluminum.)

Another reason has to do with taking the kind of computer-generated feats people see in Disney films and bringing them into the real world. After all, it’s safer to create a robotic Iron Man or Thor than it would be to train human acrobats to emulate those characters’ feats. “We’d like to do something that’s not just human, but beyond human,” says Morgan Pope, an associate research scientist with Disney Research. “The hope here is that we’re delivering something physical and tangible, as opposed to virtual and digital.”

Disney already has humans performing stunts at places like Shanghai Disneyland. And of course, they already have animatronic figures, but those guys aren’t exactly made to fly. Take the “Shaman” character in an “Avatar”-themed attraction in Florida, for example. “It’s a very, very sophisticated, very, very expressive animatronic figure,” says Tony Dohi, a principle R&D “imagineer” with Walt Disney Imagineering Research and Development. “Yet it’s definitely not something we’d want to throw 90 feet across an outdoor space.”

But unlike the Shaman, Stickman-like bots are designed to fly. A body with three sections and two flexible joints, Stickman can maneuver into a tucked position by activating pneumatic cylinders powered by pressurized air. Its onboard brain consists of a microcontroller, and two key sensor systems help it figure out what its body is doing in space. When it is in the tucked position, it rotates faster, like the way a figure skater spins faster when she pulls her arms in.

One of those sensors is called an IMU, or inertial measurement unit, which consists of accelerometers and gyroscopes. “It’s our only and best measurement for orientation, and it gives us an estimate of position as well,” Pope says.

The other important sensors on Stickman are a collection of three lasers that measure the distance between it and the ground when the creation is more or less horizontal—they do this by bouncing their light off the surface below the robot. It’s similar to the system found in self-driving cars, only much simpler.

That laser system “lets us know both how high above the ground we are, and helps us estimate the velocity,” Pope says. That’s key, because Stickman has to figure out the best time to untuck so it can be flat on its back when it lands.

“Once it in the air, it intelligently decides when to untuck,” he says.

The robot needs to make that calculation because the variables can change each time it performs a stunt. Factors like the air pressure in the pistons and even joint friction can affect the outcome. “Each throw is never exactly the same,” he says.

Pope says it’s easy to anthropomorphize the robots they create, and to empathize with them. “Especially when the intelligence is there, and the robot is making a decision to untuck in a way that you didn’t program, then there’s a real feeling of life,” Pope says. “It starts to be more than just a connection of sticks.”

Disney followed up Stickman with Stuntronics. A Stuntronics robot they revealed recently weighs 90 pounds, and can do more than simple ol’ Stickman. “It knows when to tuck its knees to perform a somersault, when to pull its arms to twist, and even when to slow down its spin to make sure it sticks that perfect landing,” the company said in a statement.