No crew for old ships 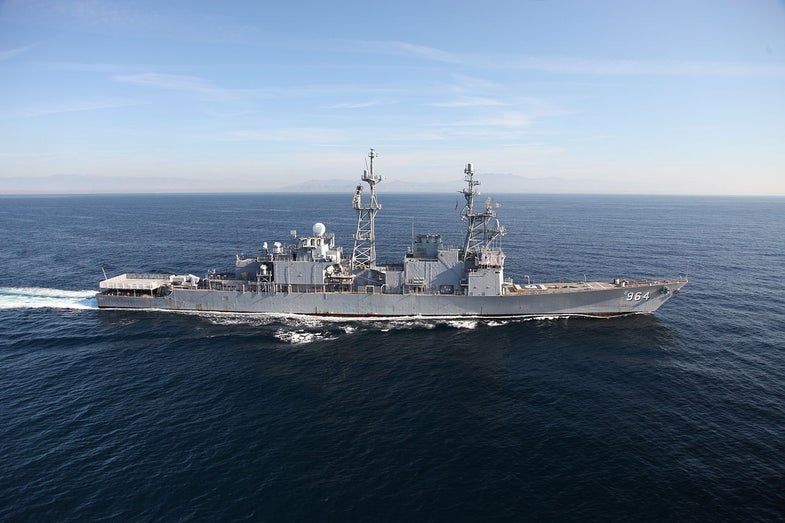 Testing modern naval weapons in a realistic way is tricky. In order to operate properly, ships need a crew, but there are times, like determining whether a new anti-missile weapon actually works, where having people on deck is an unnecessary risk. To square this circle, the U.S. Navy took the USS Paul F. Foster–an old, out-of-use destroyer–and made it unmanned, ready to be destroyed.

But destruction isn’t the first choice, of course. Even old warships are valuable vessels. So when the Navy uses the Foster to test new defensive weapons, the warship is trailed 150 feet behind by a barge stacked with shipping crates in an almost crude, LEGO-like simulacra of the Foster‘s appearance (call it a “Foster Imposter”, if you will). While the Navy sends cruise missiles flying at the shipping crates on the barge, the Foster‘s sensors are fooled into thinking the Foster is the target, so the old warship responds to the perceived threat with its anti-missile defenses. The whole time, the Foster is controlled remotely by sailors elsewhere, ensuring no lives are at risk from a weapon misfire or an accidentally successful hit.

While testing new weapons is the Foster’s current job, it also foreshadows a potential future of naval combat. The new Zumwalt destroyer is designed to run with a very minimal crew, with autonomous systems taking over most of the day-to-day management of the ship. Earlier this year, the Navy tested unmanned swarms of patrol boats, replacing onboard human crews with electronic sensors and remote controls. For now, the Foster doesn’t have a crew on board so it can safely test defensive weapons. In the future, we might see naval vessels designed from the start without the intention of ever physically carrying sailors.