Want to Know What It’s Like To Be Blown Up By A Chinese Missile? Ask This Ship.

The PLAN has recently given a retired ship a temporary second lease on life, by turning it into a target... 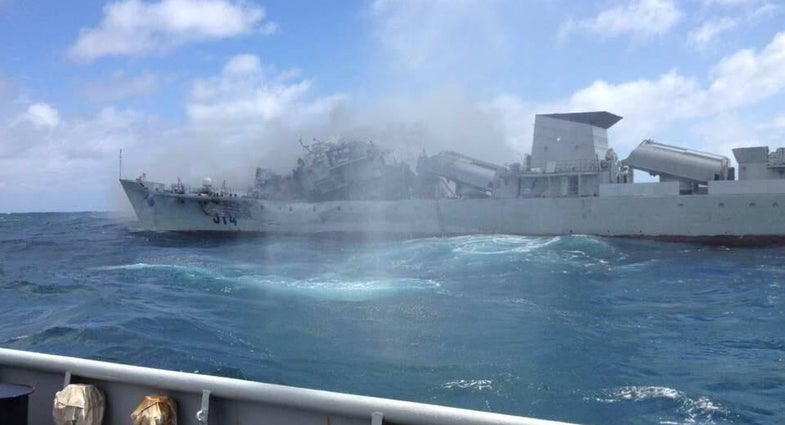 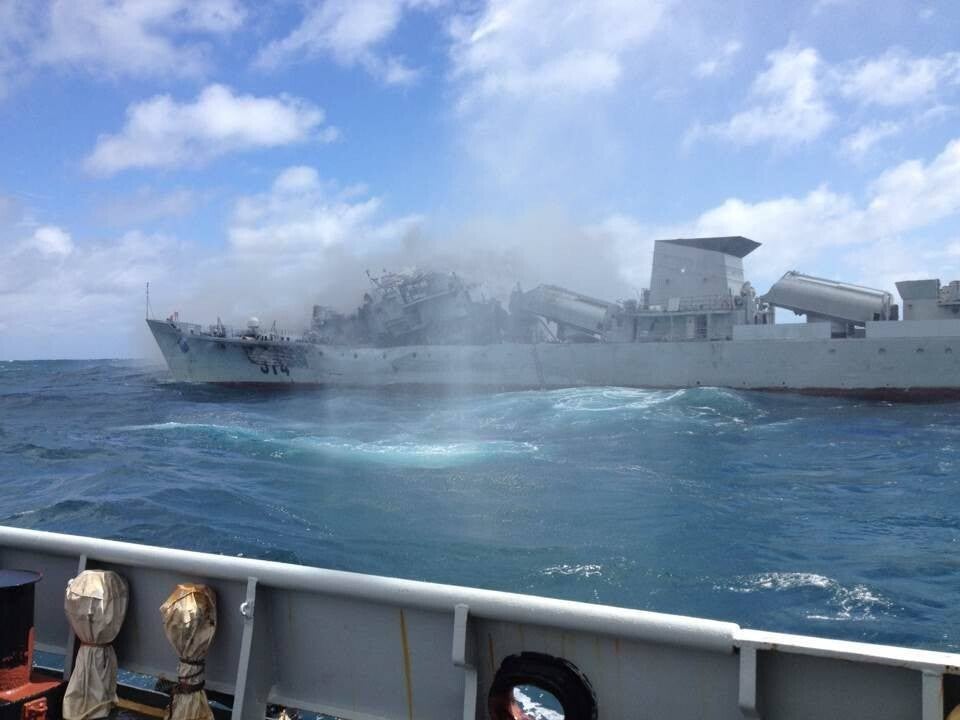 The Zhenjiang is hit by an inert Chinese anti-ship cruise missile. Note that in addition to the destroyed bridge superstructure, the hull around the bridge has also been warped by the impact, suggesting a large missile.

The PLAN has recently given a retired ship a temporary second lease on life, by turning it into a target for anti-ship missiles. The former Zhenjiang (hull number 514) is a Type 053H guided missile frigate. Built in the 1970s and 1980s, the Type 053 class was China’s first indigenous frigates, being loosely based on the Soviet Riga class. The Zhenjiang was built in 1978 in Shanghai, and decommissioned in 2013. At 1,700 tons in displacement, the Zhenjiang was armed with two 100mm cannons and six SY-1 heavy anti-ship missiles for anti-surface warfare, though the gun turrets were removed in 2013 upon its conversion into a target practice ship. This class of ship has notably also seen some of the remaining 053 frigates converted into maritime law enforcement vessels that have appeared in disputed waters with China’s neighbors. 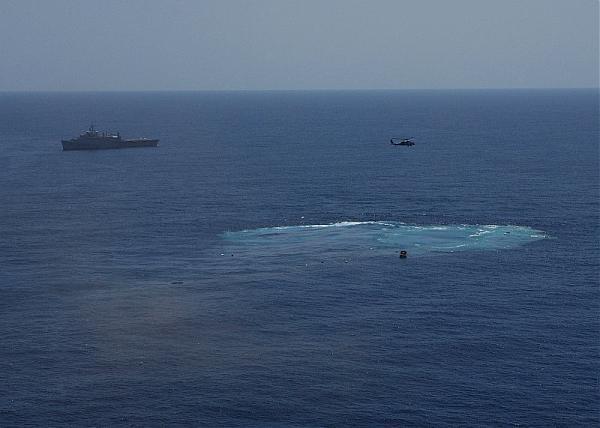 The Kitty Hawk class USS America supercarrier was sunk in 2005 as part of a study to investigate the impact of battle damage of torpedoes, bombs and missiles on a supercarrier. The USS America was attacked for four weeks, before the US Navy finally scuttled her.

It is standard practice for navies to use retired ships as target hulks, both to test new weapons as well as understand how to improve the cobalt resiliency and damage control of the ships. The USS America aircraft carrier, for instance, was sunk in 2005 off the North Carolina coast after being hit with missiles and torpedoes in a live fire exercise meant to understand the combat resiliency of a large warship.
From the photo, we can see that the Zhenjiang is still afloat, but took a hit that would have been quite damaging in a real scenario. Its bridge has been completely imploded by the impact of an antiship missile. Judging from the apparent lack of heavy smoke, scorch marks or flames indicating a heavy fire, it seems that the anti-ship missile did not have a live warhead, so the damage done to the ship was the result of kinetic energy from the missile’s mass. The apparent lack of burning missile propellant suggests that the Zhenjiang was probably hit at a far range, when most of the missile’s propellant had been expended. 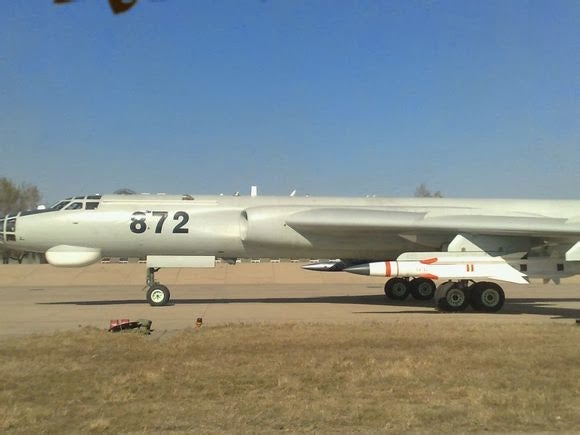 The YJ-12 is perhaps China’s most deadly antiship missile, seen here on a H-6 bomber for testing. The YJ-12 is usually air launched, can travel at a speed of over Mach 3.5 at a range of 400km. 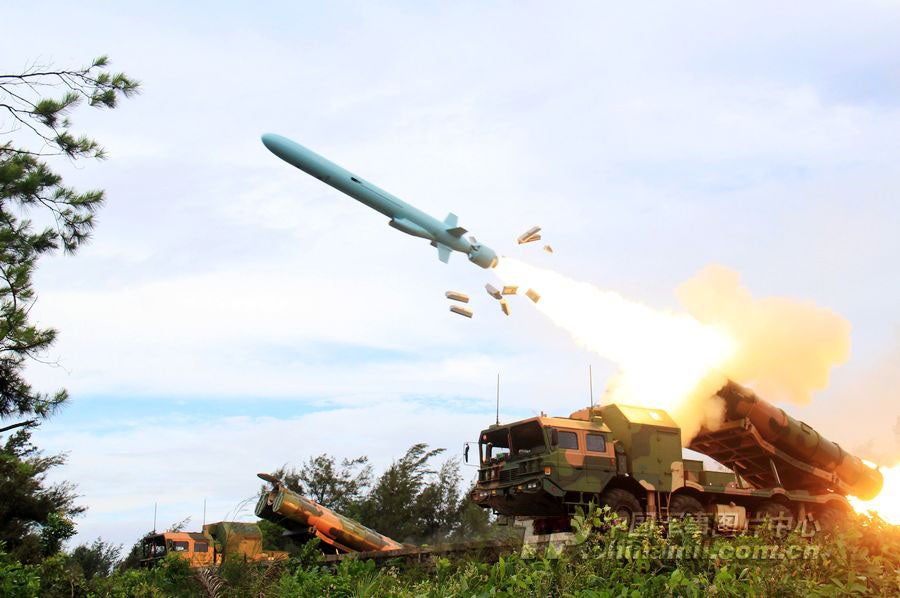 The YJ-62 is a long ranged (400k to 500km), subsonic antiship missile. It can either be launched from land, surface warships or bombers to attack enemy ships with its 300kg warhead.

But what hit the ship? Given that the missile collapsed the bridge (the size of a decent suburban house) and caused significant warping damage to the hull below, only a large anti-ship missile like the YJ-62 or YJ-12 would have the likely kinetic energy to cause such damage without an explosive warhead. The YJ-62 is a 1.2 ton anti-ship subsonic missile with a range of between 400km to 500km. The even more deadly YJ-12 missile weighs at about 1.5 tons, has a 400km and can reach speeds of over Mach 3.5. 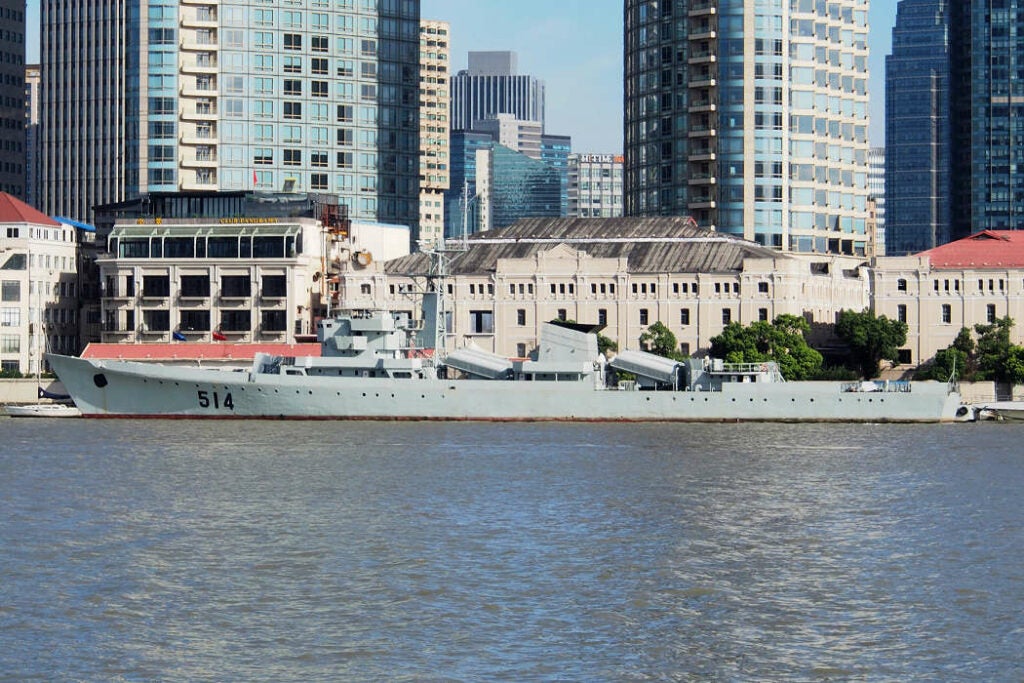 The Type 053 class frigate Zhenjiang was refitted in mid 2013, to delete its fore and aft gun turrets, to fit its second life as a target ship.

The Zhenjiang remains afloat allowing both continued damage evaluation of this test. But the future life of a target ship is rarely a long and happy one.

New Chinese 052D Destroyers, Three In a Row at a Shipyard