Everything you’ve ever wanted to know about motorcycle exhaust 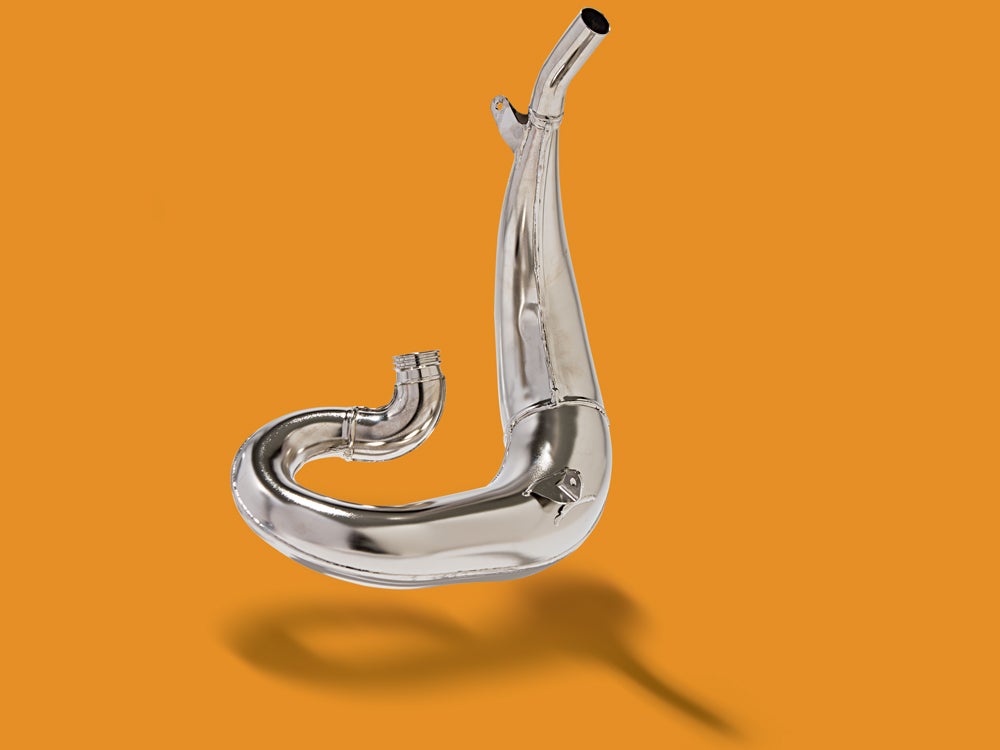 Two-stroke pipes have a ­distinct shape consisting of two megaphone sections turned on each other in order to tune both the positive and ­negative pressure waves to the piston position to remove exhaust gases and charge the fuel mixture. Jeff Allen
SHARE

This story was originally published on cycleworld.com.

Few elements have as large an impact on a motorcycle’s design as the exhaust system. From header to exit, the gently curving shapes help define some of our favorite bikes, but the shapes are far from purely aesthetic.

Exhaust gas contains useful energy in the form of velocity, and smooth shapes minimize the loss of that energy. A piston’s full-throttle power stroke begins with combustion gas at roughly 1,000 psi a few degrees after top dead center. That pressure falls rapidly as it pushes down the piston, transmitting power to it. At the moment the exhaust valves or ports begin to open, roughly 100 psi is all that’s left of combustion pressure.

Can’t we go on expanding that gas with the piston to get all its energy? We could, but we don’t because the exhaust valves have to begin to open before bottom center, and such low cylinder pressure is more efficiently used in another way: in a tuned exhaust pipe.

Automotive engines ­increasingly recover exhaust energy in turbo-chargers, but so far, seriously turbo-boosted power has been too sudden for casual use on a motorcycle. Therefore exhaust energy is put to use as sound waves.

Both positive (pressure) waves and negative (suction) waves, moving in correctly shaped ducts, can be used to assist piston motion in removing spent exhaust gas and refilling the cylinder with a fresh charge.

The basic rule in shaping exhaust pipes is that anywhere the duct increases in cross section, a passing exhaust pressure pulse will expand, thereby radiating/reflecting a ­negative wave back upstream. Anywhere the duct decreases in area holds back the pulse, causing it to reflect a positive wave.

In a four-stroke system, as the exhaust valves begin to open, a pulse of exhaust pressure enters that cylinder’s header pipe. When it reaches a point of duct enlargement—either where the header joins a larger collector or joins a tapering megaphone—it sends back a negative pressure wave toward the engine. Header length is chosen to make that negative wave arrive at the cylinder during valve overlap—the period around top dead center at the end of the exhaust stroke when the exhaust valves have not quite closed yet but the intakes have already begun to open. That negative wave enters the cylinder, at first extracting inert exhaust gas from the combustion chamber above the piston, then entering the intake system to cause intake flow to begin entering the cylinder even before the piston has started to move down on its intake stroke. This boosts torque by 1) preventing dilution of the fresh charge by leftover exhaust gas; and 2) by giving the intake process a head start.

Because negative and positive waves alternate in the exhaust pipe, at some lower rpm, it is no longer a negative wave that enters the combustion chamber during valve overlap. It is a positive wave, which stuffs exhaust gas back into the combustion chamber, back through the intake valves and into the intake system. This, by diluting the fresh charge that the piston is about to take in, causes a drop in engine torque. This is the “flat spot” that all engine builders and racers are familiar with. Nature giveth, but nature also taketh away.

Two-stroke pipes look ­completely different. They begin with a slender header pipe just like that of a four-stroke, followed by a megaphone-like horn. Then the difference appears: After the horn comes a center section of constant diameter—after which the pipe quickly tapers down as a reverse megaphone—to a small-diameter “tailpipe” (which might be invisible inside some form of muffler).

As a two-stroke’s piston, ­descending on its power stroke, begins to uncover the large exhaust port in the cylinder wall, a pressure pulse is released into the header.

When it reaches the megaphone-­like horn, it is a negative wave that reflects back to the cylinder. There, the low pressure helps remove exhaust from the cylinder and helps fresh charge to enter through two or more transfer ports.

As the cylinder fills, some fresh charge begins to be lost out the still-open exhaust port—but help is on the way. Out in the pipe, the exhaust pulse has passed through the pipe’s center section and now enters the reverse megaphone, reflecting a positive wave back to the exhaust port. This positive wave arrives just in time to stuff back into the cylinder the fresh charge that has begun to escape out the port. In the narrow peak-power rpm zone of a two-stroke, this process actually operates as a highly effective supercharger, giving two-strokes their exceptional power.

The exhaust-pipe designer’s job is to create a zone of boosted engine torque wide enough that the rider, using the gearbox, can keep the engine operating in that zone most of the time. Their solutions help give the machines we love their characteristic thrust and snarl, and form the beautiful lines we remember most.