Unexploded ordinance is a multigenerational burden—a threat in Ukraine and other nations. 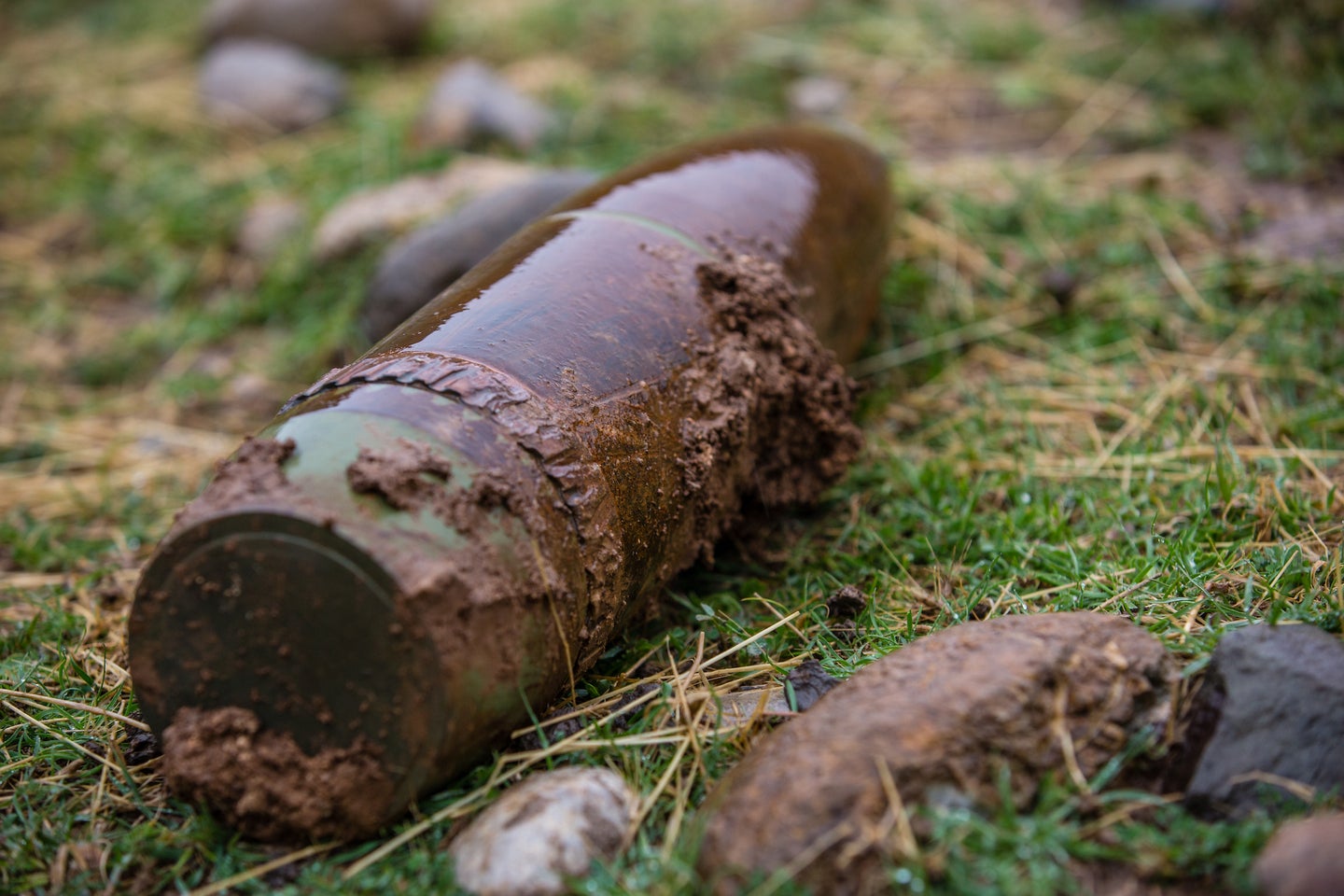 This story was published in partnership with The Center for Public Integrity. This is the eighth in a 10-part series on nuclear risk, military technology and the future of warfare in light of Russia’s invasion of Ukraine.

On March 22, a construction crew in Germany found an unexploded bomb in Essen, Germany, decades after it had been dropped during World War II. The area was evacuated, including part of a nearby hospital and a home for seniors. Late that night explosive ordnance disposal crews defused the bomb.

The old weapon is a reminder, as war continues 1,000 miles east of Essen in Ukraine, that unexploded weapons are a multigenerational burden. When wars end, and even as they continue, the painstaking work of clearing lethal detritus must be done to prevent future deaths.

“A huge number of shells and mines have been fired at Ukraine, and a large part haven’t exploded. They remain under the rubble and pose a real threat,” Ukrainian Interior Minister Denys Monastyrsky told the Associated Press on March 19. “It will take years, not months, to defuse them.”

Before Russia invaded in February, Ukraine had already spent decades of work clearing up unexploded bombs and ammunition. In 2001, Ukraine authorized a program of clearing out unexploded ordnance left over from World War II. This included clearing the Inkerman Adits, horizontal mine shafts in Crimea where the USSR had stored over 10,000 tons of ammunition. A 1942 explosion rendered the stockpile unusable, detonating many of the weapons stored within, but left an estimated 1,000 to 3,000 tons of ammunition undetonated. The Adits were a particularly complex clearing problem, and just one of many areas where leftover war explosives had to be cleared in Ukraine.

More recently, a May 6, 2004, fire at the Novobogdanovka ammunition base, just south of Mykolaiv, scattered bombs across an area of over 115 square miles. Accidents and human error at dozens of other ammunition facilities across the globe have resulted in fires, explosions and the scattering of unexploded ordnance.

Stepanivka, a village in Ukraine’s occupied Luhansk province, was the site of fighting between Ukraine and Russian-backed separatists in 2014. Viktor Bykadorov, then acting mayor of the village, told the Wall Street Journal at the time that people won’t go out to chop wood or let their children out to play, fearing mines and unexploded ordnance. Many of the explosives villagers observed in the woods were recent, but some of them date back to WWII.

In 2015, the Organization for Security and Cooperation in Europe announced it was expanding its explosive ordnance disposal team training program in Ukraine, with the goal of helping Ukraine develop its own program.

The OSCE’s Special Monitoring Mission to Ukraine, which tracks the conflict, reported that in 2020, mines and other explosive objects killed and injured more civilians than artillery shelling or gunfire.

This total number of deaths includes those from landmines, which are explosive weapons used specifically because they persist in an environment. Militaries will place landmines to block off terrain from enemy advances, letting the buried explosives form a deadly barrier. International treaties ban the employment of landmines in part because of the harm they cause to civilians. Ukraine remains a party to the Mine Ban Treaty, though as recently as 2020, the country asked for an extension to fully comply with the treaty’s obligation to destroy all anti-personnel mines within its borders.

By 2019, Ukraine already had destroyed over 70,000 landmines and explosive weapons remains, according to a Landmine and Cluster Munition Monitor report. This work was done by the military, police forces, national guard and nongovernmental organizations, among others. Ukraine has relied in part on donations for its de-mining equipment, with nations like Canada providing specialized landmine detection and monitoring tools. One such tool is a ground penetrating radar, which can help de-mining teams distinguish between metallic debris in soil and larger anti-vehicle mines.

This work predates the present war, and will continue long after the fighting stops. For example, northeastern France still bears the scars of the first World War. Its 65-square mile “zone rouge” is cordoned off as unsafe until it has been fully cleared, which will take an estimated 300 years. Beyond the zone rouge, French and Belgian farmers experience an annual “iron harvest,” when they unearth more military material when plowing fields.

Beyond Europe, a 2021 Congressional Research Service report estimated that at a minimum Cambodia had 739 square miles of land contaminated by landmines and unexploded American bombs, largely dating back to the Vietnam war. In Syria in 2021, landmines and other leftover explosives were the leading cause of death of children. This is what living with the slow work of explosive ordnance disposal means.

While some bombs unearthed are truly duds, others can persist with deadly potential for years, even centuries. In 2008, U.S. Civil War enthusiast Sam White died while restoring a recovered cannonball, still explosive 140 years after it had been made.

“Explosive weapons are prone to creating effects … that the users of these weapons cannot accurately foresee or control,” wrote Richard Moyes, Director of Policy and Research for Landmine Action.

Some of the bombs dropped on Ukraine today, like all explosives used in war, will threaten lives in the future long after the war is over.