Why Robot Trucks Could Be Headed To Afghanistan (And Everywhere Else)

In Afghanistan, the shipments are about to hit the fan. Along with pulling all of its combat troops from the... 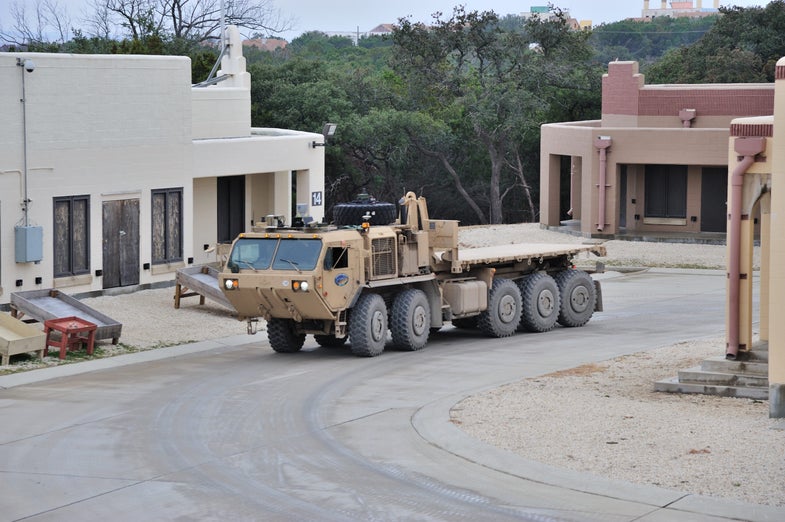 In Afghanistan, the shipments are about to hit the fan. Along with pulling all of its combat troops from the country by the end of this year, the Pentagon has to clean up after itself, hauling away most of the weapons, supplies and assorted infrastructure accumulated over 13 years of local war. Defense contractor Lockheed Martin is hoping that it can assist with the imminent scramble for the exit, by carrying a portion of that outgoing gear—some 20,000 containers’ worth, according to U.S. Central Command—aboard self-guided robot trucks.

Whether Lockheed can squeeze its ground bots into the waning days of Operation Enduring Freedom will depend on a series of demonstrations throughout the year. Last month, the United States Army’s Tank-Automotive Research, Development and Engineering Center (TARDEC) and Lockheed Martin pulled off the first of those demos, sending a convoy of robot vehicles through rural and urban environments at Fort Hood, Texas. The driverless trucks dealt with intersections, pedestrians, oncoming traffic, and stalled vehicles, all without human intervention or assistance. That’s according to Lockheed Martin, at least—the media is rarely invited to these types of demonstrations, and notifications of results are released long after the event.

Still, this is a milestone 14 years in the making. The pursuit of driverless military convoys is older, in fact, than the war in Afghanistan. In 2000, Congress mandated that (emphasis mine), “It shall be a goal of the Armed Forces to achieve the fielding of unmanned, remotely-controlled technology such that by 2015, one-third of the operational ground combat vehicles of the Armed Forces are unmanned.” DARPA, the Pentagon’s research wing, took up the challenge, launching two driverless vehicle competitions (or three, really, since the first Grand Challenge, in 2004, ended without a winner). Other military robot vehicle projects were funded, ranging from staid autonomous cargo haulers to the MULE Armed Robot Vehicle, a driverless weapons platform whose articulated wheels let it rear up to lurch over cars, or hunker down to provide cover for humans.

Then, nothing: DARPA’s races came and went, their most direct impact to date being Google’s robotic car efforts—the company hired engineers from the Grand and Urban Challenge’s winning teams to work on its partially-autonomous Priuses. And the MULE simply went, shelved after years of development, along with a wealth of other military ground bots. Even as casualties from roadside bombs and subsequent ambushes continued to mount, the unmanned vehicles that might pull humans out of harm’s way were nowhere to be found.

So it’s a cruel irony, perhaps, that those potentially life-saving systems might appear long after U.S. combat troops left Iraq, and in the midst of the withdrawal from Afghanistan. But there’s still a chance that convoys will be targeted during this year’s pullout, and Lockheed’s trucks could operate with no personnel, or, more likely, with a reduced number of passengers, all of them acting as security.

And the utility of robotic trucks could extend beyond war zones—Lockheed hopes to eventually enter the commercial sector, either with purpose-built, cabless long-haul models, or with kits similar to the ones that are already turning the military’s standard vehicles into self-guided machines. The Autonomous Mobility Applique System (AMAS) adds the same class of laser rangefinders, radar and cameras found in current automobiles and robot car prototypes, as well as actuators that operate the steering wheel, accelerator and brake.

None of these components are restricted or military-grade, and one of the models included in the January test, the Daimler-built M915 line-haul tractor truck, is the reinforced cousin of the civilian workhorses barreling down most highways. The driverless tractor-trailer convoy isn’t here, but the technology is as mature as the robot car. “Some day these things will be on public roads,” says Joe Zinecker, who served as program manager for the MULE, and is now director of Combat Maneuver Systems at Lockheed Martin Missiles and Fire Control. “We’re talking to a number of customers interested in long haul applications. The cost of one of these autonomous systems, even as applied to a commercial, industrial truck, would be far less than the salary of a driver,” says Zinecker. More substantial savings would come from improved fuel economy, since robot trucks could maintain more efficient speeds and driving behaviors, and cut wind resistance by drafting behind each other.

There are serious questions, naturally, most of which are impossible to answer at this stage. The liability issues facing consumer robot cars would extend to commercial ones—who, in other words, gets sued or charged when an unmanned automobile harms people or property? And how would a commercial robotic cargo truck respond to an accident, or to a roadway whose contours haven’t already been collected by other laser-rangefinders and disseminated throughout the fleet? The current AMAS-equipped trucks can operate with varying degrees of autonomy, muddling through some situations on their own (such as driving around an apparently stalled vehicle), or surrendering control to a human, whether in the truck, or in a remote facility or other vehicle in the convoy. Would a shipping company maintain a pool of remote drivers, or hire a single human supervisor to ride with each platoon of trucks?

Lockheed defers to its customers, both present and potential, when it comes to driving procedures and protocols. The company says its goal is to provide the raw capability for driverless cargo hauling. There are three more AMAS tests planned for this year, and even a limited deployment during the Afghanistan withdrawal could bolster the near-future use of modified trucks in mining or port operations, or on open roads. Purely robotic trucks, machines that save weight and mechanical complexity by eliminating manual controls and the entire cabin, may take longer. “Those are more than five years down the road,” says Zinecker, “and less than 20.”