What Do You Do With 34 Metric Tons Of Weapons-Grade Plutonium?

Russia backed out of a deal to dispose of it. Now what? 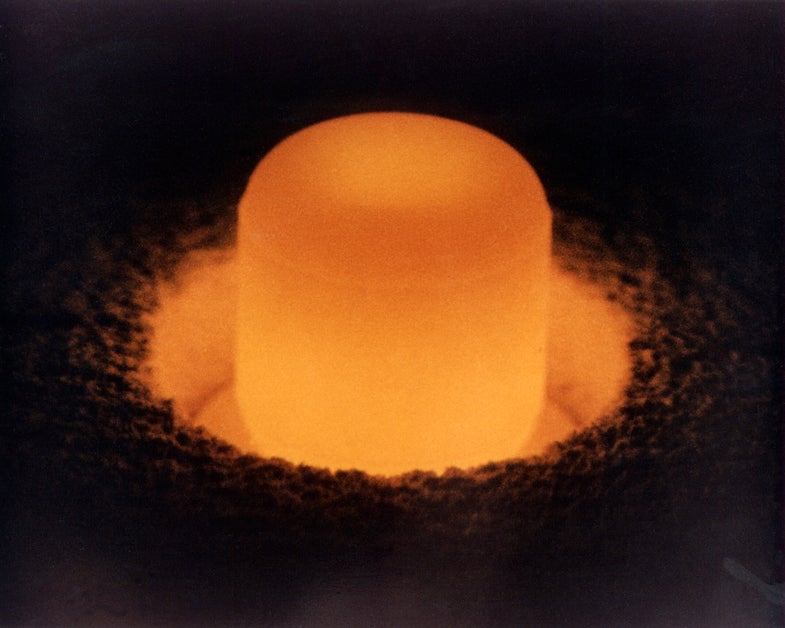 When the United States broke off cease-fire talks with Russia over the war in Syria (after the Russian air force continued to bomb civilians in Aleppo), Russian President Vladimir Putin retaliated by suspending a nearly two-decades old arms agreement to get rid of his country’s extra weapons-grade plutonium.

Signed in 2000, the Plutonium Management and Disposition Agreement stipulated that each country dispose of weapons-grade plutonium they deemed no longer required for defense purposes. Each country agreed to get rid of 34 metric tons of its excess stockpile.

Much of that excess is from the dismantlement of tens of thousands of Cold War nuclear weapons. Russia has stored some of it in the closed city of Seversk, in western Siberia–home to two of its former plutonium-producing nuclear reactors and, at one time, among the largest nuclear complexes on the planet. When the treaty was signed in 2000, the Russians were, according to The Economist, storing highly-enriched uranium and plutonium from dismantled nukes in 23,000 canisters at the site.

The U.S., meanwhile, has stored much of its plutonium at the Pantex Plant near Amarillo, Texas, which oversees the final assembly and disassembly of many of the country’s nuclear warheads, until they can be disposed of. Originally, the plutonium was to be stored in a vault at Los Alamos National Laboratory in New Mexico before those plans were scrapped; Pantex was then repurposed as a long-term storage option.

Neither Russia nor the U.S. has been quick to dispose of their excess plutonium. (It’s extremely difficult to do). But with Russia now in essence putting its stockpile back on the table in its geopolitical game of Risk, many questions arise. Namely, what is this stuff? And how the heck do we get rid of it?

What Is Weapons-Grade Plutonium?

As its name implies, weapons-grade plutonium is very good at exploding. The reason for this is the presence of plutonium-239–a plutonium isotope characterized by its long lifespan (half-life: more than 24,000 years) and an ability, when smashed, to release a lot of energy; One kilogram of plutonium-239 releases more energy than the 64 kilograms of uranium that were in the Little Boy bomb the U.S. dropped on Hiroshima in World War II.

This particular plutonium is a byproduct of uranium-238 (a naturally-occurring form of uranium and the the most abundant on earth, found in uranium mines across the globe), after it has been used in nuclear energy reactors. Plutonium-239 packs its most powerful punch in high concentrations. So-called weapons-grade plutonium–the type Russia and the U.S. have on hand–is at least 93 per cent plutonium-239, with the remaining seven per cent being other plutonium isotopes.

Breaking apart at devastatingly high speeds is pretty much the only thing plutonium-239 is good at. There aren’t many other practical uses for it. It could be used to (slowly) heat water, sold by the government in one gram amounts as reference samples, or serve as a very dense, mostly safe paperweight–in small chunks, plutonium-239 doesn’t let off much spontaneous radiation. (Plutonium-238, a close relative, can power things; NASA uses it to power its deep-space probes.) But plutonium-239 releases so much more energy that it can only be used in certain kinds of nuclear reactors. Since its discovery during the Manhattan Project in the 1940s, it has first and foremost been a weapon.

How Do We Get Rid of This Stuff?

One reason the disposal agreement between Russia and the U.S. took a decade to settle was that they couldn’t agree on how to dispose of this stuff. The only realistic option, and the one settled on, was to convert it into plutonium oxide, a chemical compound of plutonium and oxygen, which could still–by the way–be used as a small nuclear weapon, but which the countries intended to combine with uranium oxide to create mixed oxide (MOX) fuel. That’s stuff that can be used in commercial power reactors. As a bonus, MOX fuel cannot be used for weapons, meaning once the plutonium-239 is caught up in it, it can’t be returned to its original, explosive state.

It’s an expensive process. The U.S. began construction in 2007 on a facility at the Department of Energy’s (DOE) Savannah River Site in South Carolina to convert the surplus plutonium-239 to MOX fuel. The MOX Fuel Fabrication Facility is still unfinished and beleaguered by opposition; Neither the government nor U.S. commercial reactors are properly equipped to handle MOX fuel. It’s expected to cost as much as $10 billion to finish construction, and the cost of converting 34 metric tons of plutonium is expected to cost an additional $24 billion.

Science has stepped in to help. The Advanced Recovery and Integrated Extraction System (ARIES) at Los Alamos has taken on a few hundred kilograms a year. ARIES was created in the 1990s as a test system for dismantling nuclear warheads and converting their chunks of plutonium, called “pits,” into plutonium oxide. With the MOX facility unfinished, this is the only way to convert the U.S. surplus to MOX fuel.

ARIES is an eight-step process. It handles everything from dismantling a weapon, removing its pit, converting the pit’s plutonium into a plutonium oxide before further refining it, and ultimately packaging it for long-term storage in a vault at Los Alamos’ Technical Area 55 Plutonium Facility. The work is every bit as challenging as it sounds: Technicians dismantling a weapon must work through gloveboxes. These large, airtight containers separate the technicians from the weapon, and all of their work is done through a series of large gloves attached at various points. It involves firing the plutonium pits, carved into chunks, in furnaces until they become the sand-like plutonium oxide. 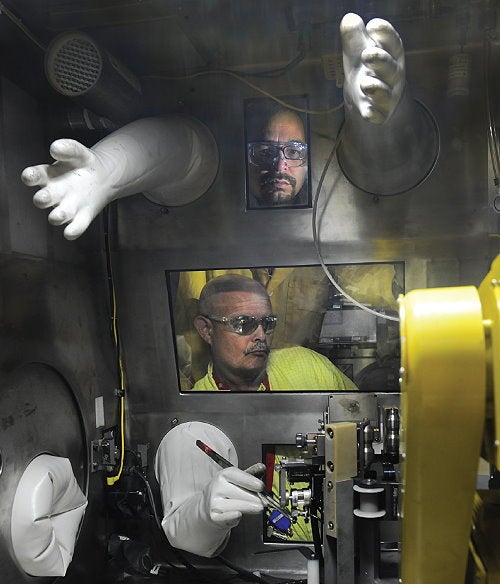 Extracting plutonium pits–spheres that resemble apricot or peach pits–from dismantled nuclear weapons is delicate work, made even more complicated by the glovebox surrounding the weapon and keeping the technicians safe.

The U.S. had planned a Pit Disassembly and Conversion Facility, also intended for the Savannah River Site, to dismantle U.S. warheads, but that was cancelled in 2011. ARIES has thus taken over that task. In its first year of operation, it produced over 200 kilograms of plutonium oxide. “If requested by the [National Nuclear Security Administration] to move from a process development to a production mission, we stand ready to serve. We can do it,” Alex Enriquez, an ARIES manager, told Los Alamos’ National Security Science publication in 2012. “Not as fast, of course, nor on the scale of a large, dedicated facility, but our process works.”

At its current rate of 300 kilograms per year, it would take ARIES well over 100 years to convert all 34 metric tons of plutonium the U.S. has agreed to dispose.

So What’s the Hold Up?

The DOE is stepping away from its MOX plans. Its 2017 budget requests $270 million to terminate the MOX Fuel Fabrication Facility’s construction, and asks an additional $15 million to pursue a dilute-and-dispose option. Instead of converting the excess plutonium into MOX fuel, the new plan is to blend the plutonium oxide with a series of cementing, gelling, thickening and foaming agents into a mixture called “stardust.” National Nuclear Security Administration [NNSA] experts informed Popular Science that for the dilute-and-dispose method, plutonium oxide is still necessary. Its sand-like quality makes it possible to mix it into the stardust.

A Los Alamos report indicates that by the end of the process, stardust is less then 10 per cent plutonium. As an added precaution, the stardust would be sealed in double-layered stainless steel containers and stored in a “geologic repository”–perhaps at the Waste Isolation Pilot Plant in New Mexico, where other nuclear waste is stored. In other words, it would be buried.

NNSA experts also said that in order to pursue the dilute-and-dispose method, Los Alamos is in the process of expanding its ability to convert weapons-grade plutonium to plutonium oxide. ARIES is committed to two metric tons of plutonium oxide–the rest will be done on-site once Los Alamos can handle the task.

In a statement to Popular Science, the DOE said the U.S. remains committed to verifiably disposing of its excess plutonium, despite Russia’s walk-back on the pledge. It also confirmed that the dilute-and-dispose method is now being pursued for plutonium stores not covered by the agreement, rather than the MOX fuel method, because dilute-and-dispose will be cheaper and quicker to implement.

The agreement states that the 34 metric tons of weapons-grade plutonium being disposed must either be used as fuel–which is why Russia had chosen to convert its excess into MOX fuel–or converted into immobilized forms. NNSA experts said that the dilute-and-dispose method can be considered an immobilized form under the terms of the agreement once it has been mixed into stardust and stored.

The U.S. Department of State, which oversees the country’s involvement in the agreement, has not responded to questions about how long it will take for the U.S. to complete its disposal of its 34 metric tons of weapons-grade plutonium and whether the dilute-and-dispose method will be used for it.

There’s no word on what Russia plans to do.