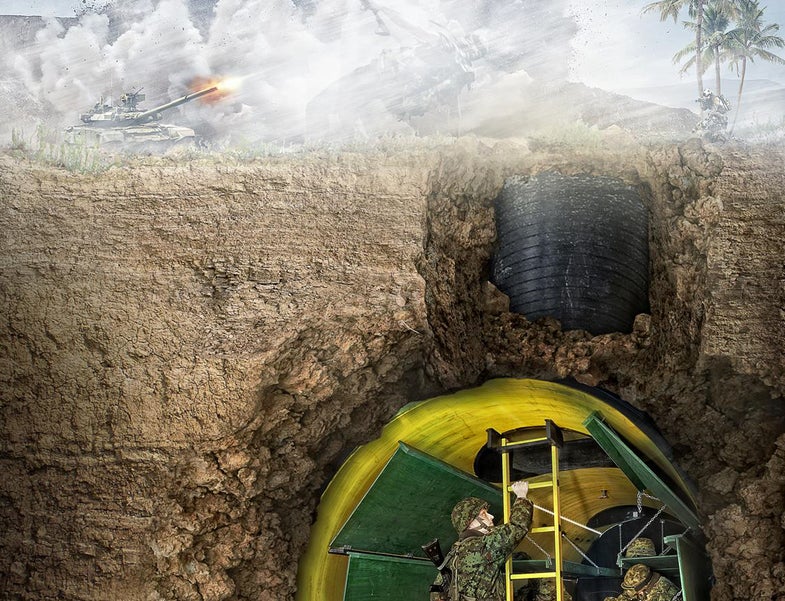 Russia is not an easy neighbor for a country to have. In 2008 they invaded parts of nearby Georgia, protecting splinter republics that exist to this day. Last year, shortly after the Winter Olympics and a protest movement in Ukraine that drove out a Russian-aligned president, Russia seized the Crimean peninsula from Ukraine, and continues to funnel arms and fighters to separatists in Eastern Ukraine as they fight against the Ukrainian government. So it’s perhaps no surprise that in little Estonia, which borders Russia on the east, a company named Terramil is making simple-to-install modular underground bomb shelters.

At its most basic, Terramil’s shelter houses 12 people underground. Inside, it measures about 7 feet high and 20 feet long, and rests securely beneath six-and-a-half feet of dirt. After an excavator digs the hole, the shelter can be set up in about 90 minutes. The standard shelter costs about $20,000, which seems about right for a mostly plastic tube designed to survive the apocalypse. The polyethylene body means the shelter is watertight, and can survive at temperatures from -72 to 176 degrees Fahrenheit. Protection from bombs of all kinds comes courtesy of the dirt and soil placed on top of the shelter, which does an amazing job at stopping artillery blasts.

Terramil’s brochure for the shelter promises much more than a simple sanctuary in a Desert Storm. With modules for generators, offices, showers, toilets, storage, kitchens, technical support, corridors, and freezer rooms, an entire underground city can be built in miniature, ready to keep a population safe from whatever doom rains down from above. There’s even a morgue module, so shelter inhabitants don’t have to leave the safety of their underground confines to bury their dead.

Perhaps the bunker-buyer isn’t looking to quietly outlast a war above. One schematic video from Terramil shows the shelter configured as a small underground barracks, housing soldiers and weapons ready for a counter-attack. To complete a scorched-earth strategem that comes with bunker-based sneak attacks, there’s a rack of landmines for the troops to place in the blasted soil above.

In the video below, a Terramil shelter is assembled and then bombarded with artillery. Although the short clip doesn’t show the shelter afterwards, the assumption is that it survives intact. Watch: