Thermobaric Bombs And Other Nightmare Weapons Of The Syrian Civil War 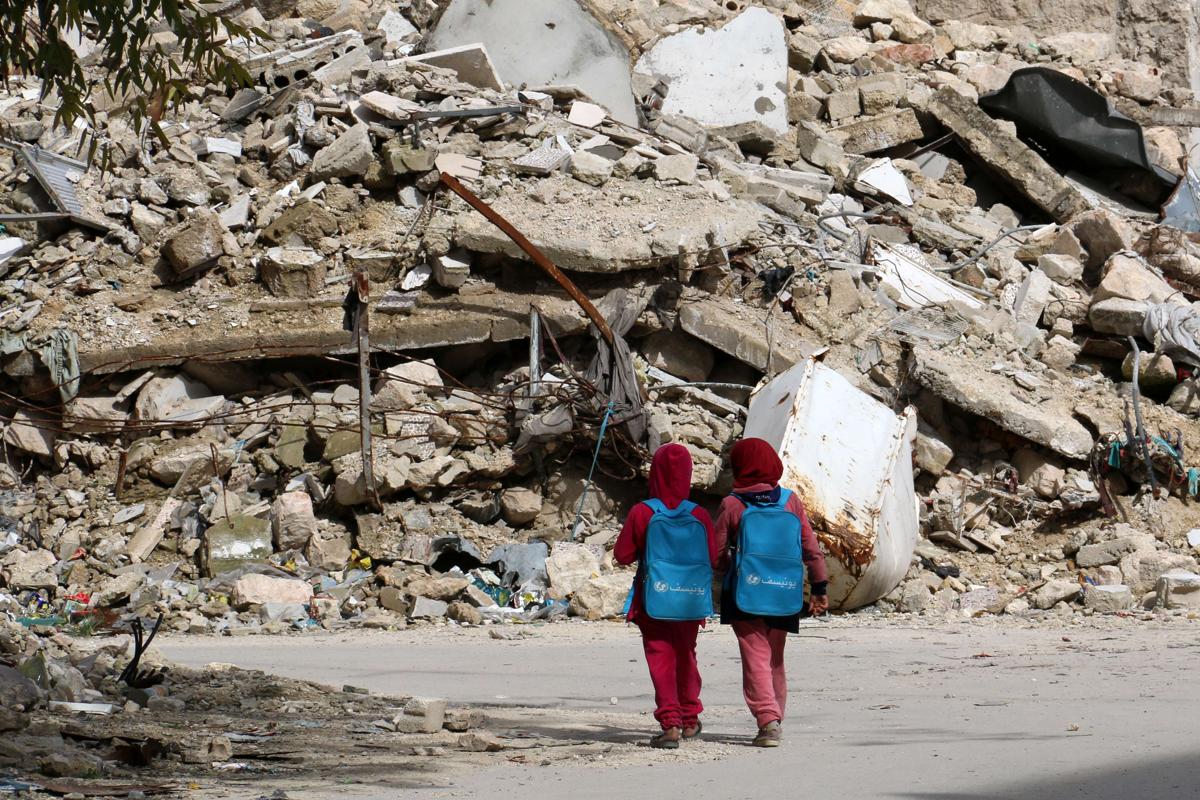 All war is horrific, but some aspects of war are more horrific than others. The death toll of Syria’s civil war was estimated last winter at 470,000, each a singular tragedy. Yet it’s often particular weapons, used on particular targets, that cause international condemnation. When the State Department announced on Monday that the United States was suspending efforts to work with Russia on a ceasefire in Syria, the State Department listed in particular the targeting of civilians and aid convoys as the reason for the halt.

Underscoring that point, an anonymous intelligence official, cited by both the Washington Post and Reuters, notes that Russian airstrikes on the city of Aleppo have used a range of deadly munitions, “including barrel bombs, thermobaric bombs, incendiary munitions, cluster bombs and bunker busters.”

What are the kinds of weapons Russia used in airstrikes, and who else uses them?

Barrel bombs are crude IEDs dropped from the sky. As the name implies, they’re barrels filled with shrapnel and explosives, sometimes gasoline, and often dropped by helicopters. They’re a signature weapon of the Assad government as it fights against rebel groups within Syria, and barrel bombs are as indiscriminate as they are deadly.

I’ll get back to thermobaric weapons in a minute, because it’s first important to understand incendiary munitions and the treaty concerning them.

Incendiary munitions are, as the name suggests, ones that catch fire and kill primarily by burning. The laws of war allow for the use of incendiary weapons against military targets, Protocol III of the Convention on Certain Conventional Weapons prohibits their use against civilian targets. Syria is not a signatory to that convention, but both the United States and Russia are. There are documented cases of Russia using incendiary weapons in Syria, in support of Assad’s government and against civilians, which are likely war crimes.

Cluster munitions are similarly straightforward by name: it’s a bomb that releases a lot of other, little bombs. Cluster munitions are somewhat regulated by the Protocol on Explosive Remnants of War and are prohibited by the Convention on Cluster Munitions, which entered into effect in 2010. Cluster munitions weapons are internationally condemned for many reasons, not the least of which is dangers posed after use from scattered, unexploded bombs. Russia and the United States are both signatories to the Protocol on Explosive Remnants of War, while Syria is not. Neither Russia, nor Syria, nor the United States signed the Convention on Cluster Munitions. The United States explicitly says that cluster munitions have military utility, and the Department of Defense adopted a policy that “cluster munitions used after 2018 must leave less than one percent of unexploded submunitions on the battlefield.”

Bunker busters are bombs designed to penetrate and destroy targets deep underground, like hardened military bunkers. While such weapons have military targets, they can, like all weapons, be used against non-military targets, in horrific ways.

“Children are being killed and maimed. Airstrikes are hitting the few remaining hospitals. The use of bunker-busting bombs means children cannot even safely attend schools that are underground,” Benyam Dawit Mezmur, Chair of the UN Committee on the Rights of the Child, told the UN News Service this week. Russia has at least one kind of the bunker buster-like weapons in its inventory, the heavy and deep-punching KAB-500L, and it is possible that the BETAB bomb, designed to destroy runways and concrete buildings above ground, could be used to hit targets underground, too.

When reached for comment about the thermobaric weapons used by Russia that led to the halt of cooperation, the State Department redirected questions about specific types of weapons to the Pentagon. The Pentagon replied only to say it doesn’t comment on intelligence matters.

So what, specifically, are thermobaric bombs–and what makes them stand out as particularly horrific, worth of inclusion in the list above?

“Fuel Air Explosives,” defines Wilson W.S. Wong in his 2013 book, Emerging Military Technologies: A Guide to the Issues are “Explosives that exploit atmospheric oxygen for part of its oxidiser, and therefore are dependent on dispersing the fuel component properly to achieve the correct fuel/air ratio before detonation. Also called thermobaric weapons, these weapons are noted for producing a large long-duration pressure wave.”

That’s a good working definition, but it conflates a couple terms. In a recent paper published in the journal Defense Technology, chemist Lemi Türker of the Middle East Technical University in Ankara, Turkey, clarifies. Türker writes:

It’s important to distinguish how thermobaric bombs work compared to others. Most conventional bombs fall into two categories. The first send fragments and shrapnel through a person (or vehicle, or building). Shaped charges, instead, destroy by using a narrowly-directed explosive to create a hot jet of plasma, that punches through armor and anything on the other side of that armor. (The Army Research lab has 124 slides detailing, step-by-step, the math behind just how shaped charges work).

Here’s what volumetric weapons, including thermobaric and fuel-air explosives, actually do. Further explained by Türker:

Essentially, the whole area with the dispersed bomb fuel catches fire suddenly, all at once, sending out a powerful shock wave. The blast takes longer than in a normal, high-explosive bomb, and the shock wave can reverberate, hitting the people inside at high force over and over again. What’s the military advantage of using a weapon like this? From Türker:

Volumetric weapons, including fuel-air explosives and thermobaric weapons, are not unique to Syria’s civil war. The United States developed fuel air explosives in the 1960s, and used BLU-73/B fuel-air bombs in the Vietnam war, both as a tool for detonating minefields and for killing people. Russia used fuel-air explosives dropped by planes against Chechen separatists in the mid-1990s. In 1999, Russia used the tank-like TOS-1 Buratino against the Chechen capital of Grozny, with the Buratino firing rockets with thermobaric payloads at targets in the city. The United States used thermobaric bombs early in the Afghanistan war, intending to kill Al-Qaeda and Taliban forces in caves. 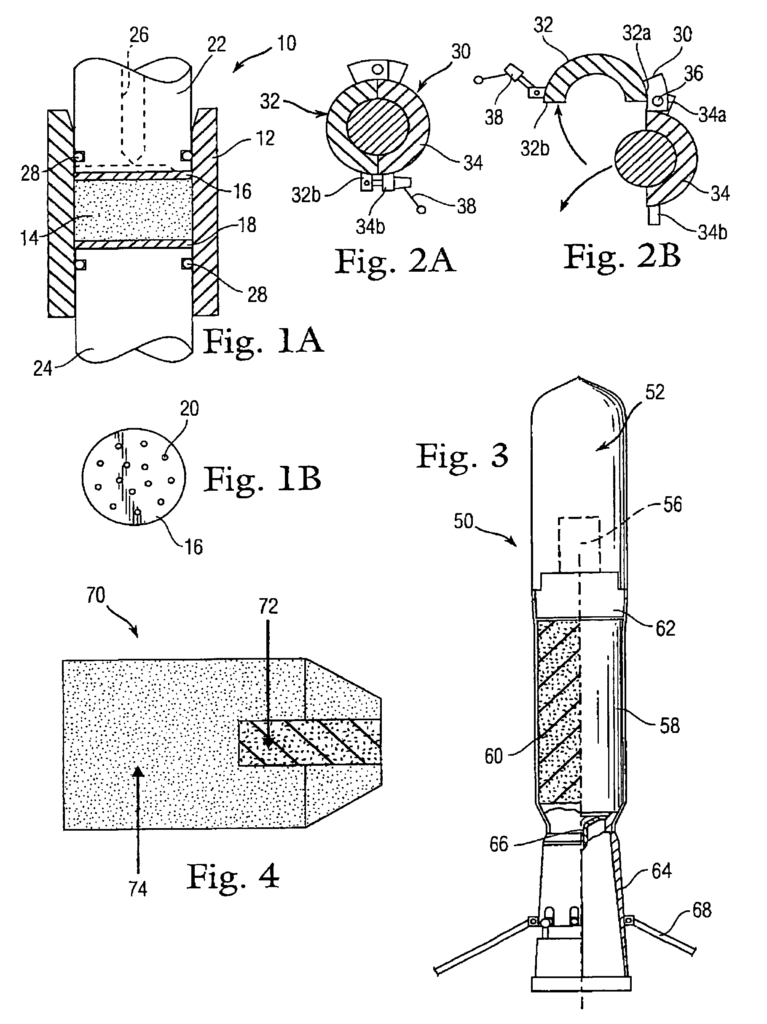 Figure From A Patent For Thermobaric Explosives

This is an American patent, and describes the device generally. From the patent: “Thermobaric explosives are designed to produce heat and pressure effects instead of armor piercing or fragmentation damage effects. Thermobaric explosives are generally fuel-rich compositions containing a nitramine, characterized by the energy release occurring over a longer period of time than standard explosives, thereby creating a long-duration pressure pulse.”

The United States and Russia have both tested larger thermobaric bombs, each billed as a sufficiently lethal alternative to even deadlier nuclear weapons. Debuted in 2003, the GBU-43/B Massive Ordnance Air Blast was immediately nicknamed the “Mother of All Bombs,” and has yet to see use against a target outside a test range. In 2007, Russia tested their own giant thermobaric weapon, and called it the “Father of All Bombs.” Besides the United States and Russia, at least China and India have thermobaric weapons.

Fuel-air explosives, which are somewhat less complicated to make, have been used by Syria’s government itself, according to Human Rights Watch. Other open-source observers have found evidence of Syria using fuel-air explosives at least as early as in 2012.

If the weapons themselves are so gruesome, will there be a specific treaty to ban them?

Instead, what’s more likely to matter are modern updates to the older laws of war, less about the weapons used and more about the kinds of targets the weapons are used against. It’s one thing to have a weapon for a military target, and entirely another to turn that same weapon against children trying to attend school underground in a besieged city.

Update: This post has been changed to include a thermobaric patent diagram, and the response from the Pentagon.