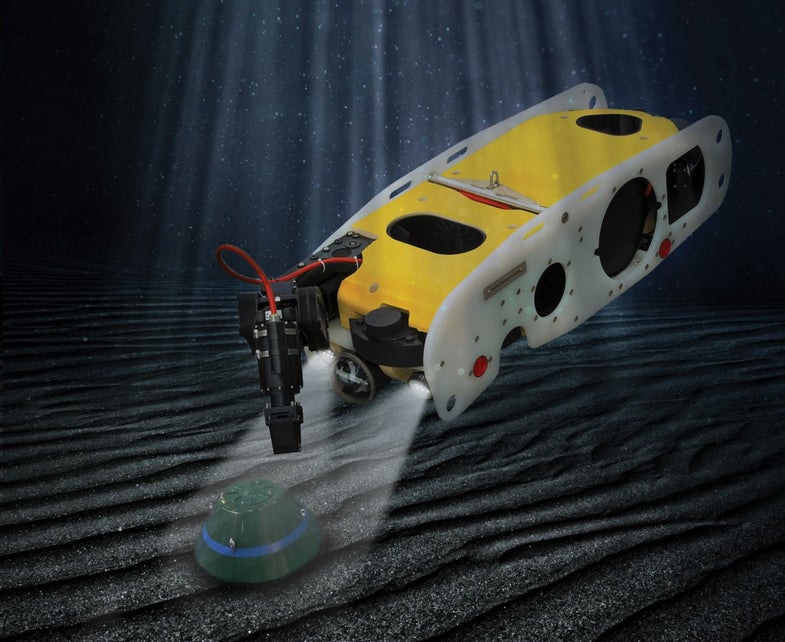 Landmines are a bad day waiting to happen. The classic explosives, used in war for centuries, hide in plain sight, waiting for someone unfortunate enough to set them off. Sea mines are a similar peril, only threatening whole boats at a time. And while there are plenty of robots that can find the bombs on land, there aren’t that many which can do the trick in water, especially close to shore. The Sea WASP stands for “Waterborne Anti-IED Security Platform.” Made by Sweden defense and auto giant Saab, the Sea WASP is an underwater drone made to find Improvised Explosive Devices under the water’s surface.

It takes two people to operate the Sea Wasp. The robot is tethered, with 500 feet of cord to let it explore depths of up to 200 feet. On land, the whole 5.5-foot long machine weighs about 200 pounds. It has forward-looking sonar, several sensors for depth and navigation, and two cameras: a big one on the front of the vehicle, and another one on the grabber arm.

Once the Sea Wasp has found the device, it will disposes of them similar to how ground robots would. That means human technicians would watch video as the robot handles the explosive, and then determine if it’s harmless, can be dismantled, and/or needs to be blown up far away from people and ships.

Mines are an old weapon of war, and improvised explosive devices are no different. Finding a safe way to identify and neutralize those weapons is important for any modern military, and making sure that bomb disposal doesn’t stop at the water’s edge is in everyone’s best interests, too.