Russia’s War Robots Are Less Than They Appear

They exist, but they’re not fighting battles just yet 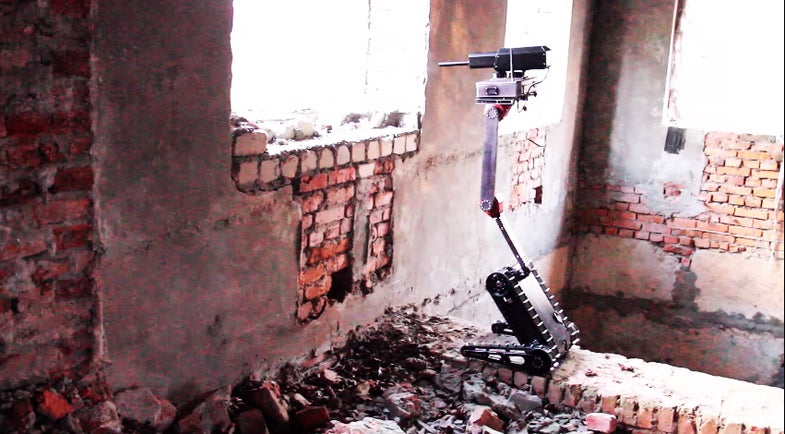 Most war robots aren’t. The icon of highly advanced machines at war is the modern combat drone, a sleek gray warplane with an unblinking eye and a bundle of missiles held under wing. Strip away the modern trappings, though, and they reveal themselves to be highly refined versions of slow airplanes with fancy cameras, remote controls, and some stabilizing software. And that’s in the United States, where the Pentagon has continuously invested billions of dollars into unmanned vehicles over the past several decades. So when Russia claims that it has working war machines, and it’s using them in Syria, its time to be skeptical.

Sputnik, one of Russia’s state-owned English language news services, occasionally showcases a new war robot. On Sunday, they highlighted the Uran-6 mine-sweeping robot. It’s a heavy, remote-controlled bulldozer with some ability to recognize and detonate explosives. That’s a totally normal robot a nation could have.

Other times, Sputnik promises a lot more than the robot on display can deliver. Take the RS1A3 Mini Rex by LOBAEV Robotics. LOBAEV itself is a Russian sniper rifle maker, and they boast that the robot can fit in a backpack. To hype the remotely controlled weapon’s abilities, Sputnik draws a quote from legendary physicist Stephen Hawking, contrasting his words about autonomous weapons writ large with this small machine.

Here’s what Mini Rex looks like climbing up stairs, in a fast-forwarded scene:

In a heavily edited video clip, the robot crawls over rough ground, folds compactly, and shoots at several bleak mannequins. If it’s abilities match what’s shown in the video, it’s a real tool for some niche combat scenarios, but hardly an independent robot soldier in its own right.

This hyperbole matters, because sometimes Sputnik runs a headline on Christmas morning like “The Syrian Army Deploys Russian-Made Military Robots,” and then goes on to argue that these robots killed 70 people in battle. This almost certainly didn’t happen, but the clean production and seemingly authoritative voice of Russia’s state-funded news arm makes it look like a real event.

Over at Bellingcat, an open-source investigative news site, Aric Toler dove into the Russian claim. His post is worth reading in full, as it gets into the nitty-gritty details of the story’s birth on social media and its subsequent transformation into a shiny news item, to finding battles that could fit the template and then laying clear why they don’t. Here, I want to focus specifically on what Toler says about the robots.

There is no lack of robots being built for war, or stories about future wars that may include modern robots. But just because we can see that future tantalizing and terrifying on the horizon, doesn’t mean we’re anywhere near it yet. And when we do get there, the proof almost certainly will come straight from the source. Until then, best to hold off on claiming the robopocalypse is here.