The program is called "Armed Overwatch." Here's what to know about the aircraft—and its roots as a crop duster. 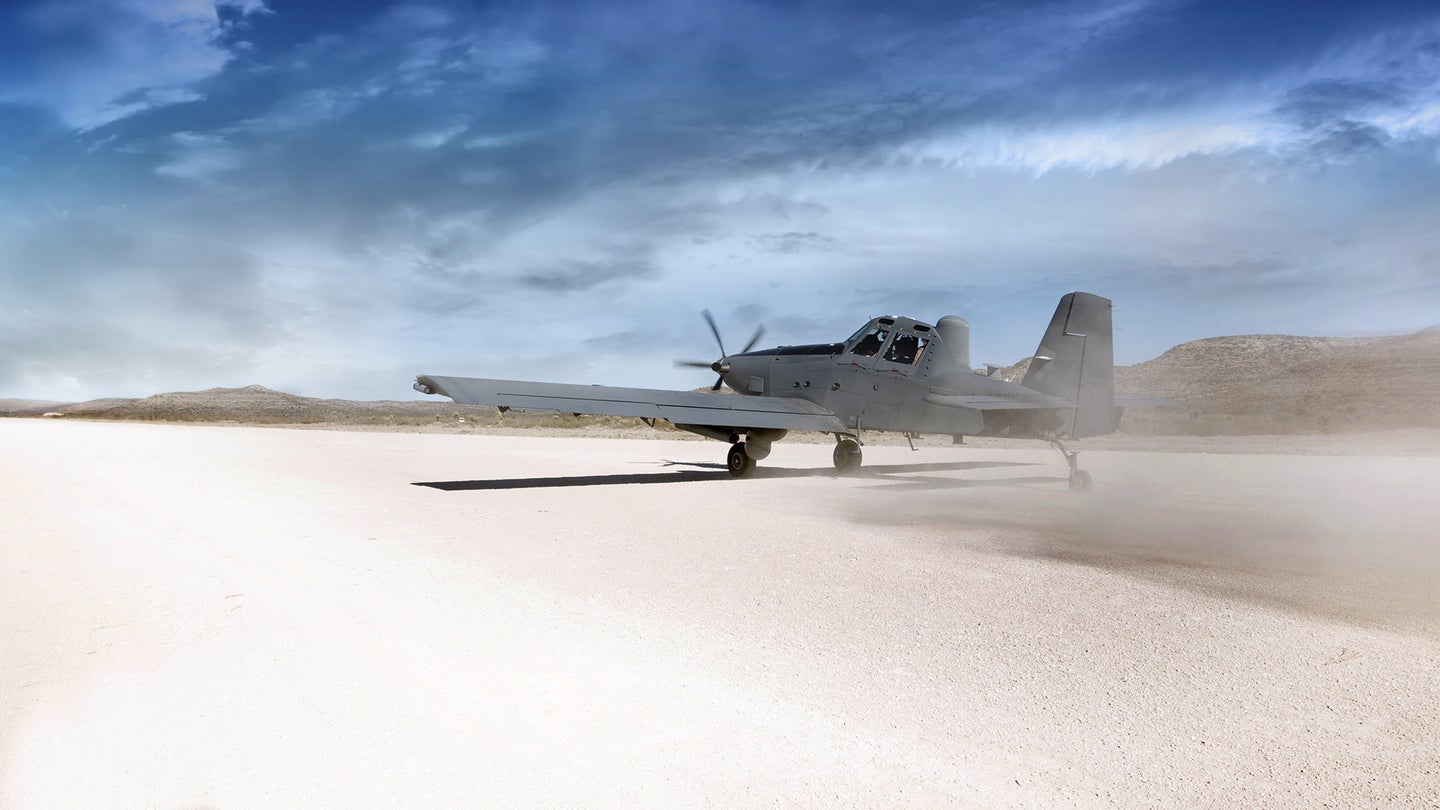 On August 1, Special Operations Command (SOCOM) announced that the next plane in its inventory would be a single-engine prop aircraft. SOCOM will buy up to 75 AT-802U Sky Warden planes, built by L3Harris Technologies and Air Tractor. These planes will support special operations forces, like Delta Force or Navy SEALs, as they fight irregular wars.

The name of this program is “Armed Overwatch.” The contract announcement says it “will provide Special Operations Forces deployable, affordable, and sustainable crewed aircraft systems fulfilling close air support, precision strike, and armed intelligence, surveillance and reconnaissance, requirements in austere and permissive environments for use in irregular warfare operations in support of the National Defense Strategy.”

Irregular warfare is a broad term that is easier to define by what it doesn’t include. Regular warfare is when the uniformed soldiers of one nation fight the uniformed soldiers of another. These conflicts usually involve the whole range of conventional military forces, from rifles through tanks and artillery to fighter jets and bombers. Irregular warfare, by contrast, involves fighting against insurgencies, rebellions, and tracking down people linked to terror operations. It can also involve helping other countries’ militaries do the same.

For example, in 2003, the US invaded Iraq with a conventional war, which lasted until the collapse of Saddam Hussein’s military. Armed resistance afterwards to the American military and to the new government of Iraq became irregular warfare, and to this day the US deploys forces in the country to assist in training Iraq’s military in irregular warfare.

For SOCOM’s purposes, a plane that can support special operations forces doesn’t need to survive in a sky filled with hostile fighter jets or when the enemy brings dedicated anti-aircraft vehicles to the battle. Instead, what is most important is that the plane can fly easily, shoot what it needs to shoot, as well as take off and land if need be on rough runways and cleared fields, instead of dedicated airbases.

[Related: Navy SEALs could get new airborne backup. Here’s what the planes look like.]

Those characteristics, that rugged versatility, are likely why the Sky Warden won out over the four other planes SOCOM considered for the contract last summer. The contract initially awards $170 million, or about the price of two F-35A stealth jets, with a ceiling of $3 billion for the full fleet. L3Harris said in a statement that production will begin in 2023, for the initial lot of six Sky Wardens.

“We want to deliver game-changing, modular solutions to U.S. special operators for their hardest missions, and Sky Warden does just that,” Christopher E. Kubasik, CEO of L3Harris, said in a statement.

“Armed Overwatch” is a role that involves both scouting for targets and attacking enemies on the ground. While SOCOM considered planes that could also perform a transport role for the special operators, the Sky Warden is built to scout and to attack. To that end, the Sky Warden can carry over 8,000 lbs of payload while armored. The wings can carry a range of weapons, from 500-pound bombs to small missiles to sensor pods, and the center of the aircraft can host two heavier systems as well. The wing station can fit a gun, like a .50-caliber machine gun or a 20mm cannon. With a full load of sensors and weapons, the plane can take off on a runway of just 1,400 feet, and it can land on one 1,200 feet long. The tandem cockpit seats two pilots.

The AT-802 (note the lack of a “U,” which denotes the latest variant, the AT-802U, that SOCOM is getting) first flew in 1990, where its rugged airframe and heavy payload capacity made it an ideal crop duster. As a crop duster, the plane was used to spray crops on counter-narcotics missions, an action that sometimes saw the planes shot at by farmers defending their crops. “Years of coca crop eradication missions in South America resulted in the development of lightweight composite ballistic armor for the AT-802U cockpit ‘bathtub’ and engine compartment,” notes the Air Tractor page for the plane.

In other words, SOCOM is getting a plane with crop duster origins, and one that can be used for the military missions of special operators. The Sky Warden is armored against attack, provided the enemy it is facing is armed mostly with small arms, like machine guns and rifles.

This was a concern 13 years ago, when the Air Force announced a plan to purchase 100 such planes in 2009. Skeptics of the Air Force’s 2009 plan for a light attack plane similar to the Sky Warden noted at the time that insurgent forces could get portable and effective anti-air weapons that could threaten the aircraft. With the award of the Armed Overwatch contract this week, former Popular Science contributor Peter W. Singer, now a fellow at New America, revisited an article he wrote that year, tweeting, “And note, since writing that in 2009, the cropduster [Sky Warden-style plane] has not improved, while both the enemy capabilities and the unmanned alternative has obviously drastically improved.”

As nations like Germany and the United States offload old anti-air missiles to Ukraine for use in its war against Russia, the possibility exists that some of these weapons will make their way onto the black market. While old anti-air missiles may struggle against modern jets or be overkill for modern drones, they are perfectly suited for attacking planes like the Sky Warden. As SOCOM makes a big bet on how to fight irregular wars from the sky, it is also gambling that the enemies it finds will lack anti-air weapons, even as war makes those weapons more available.

Correction on August 3: This story has been updated to correct a typo that referred to the F-35 fighter jet as an F-25.