A ground camera captured an image of the helicopter entering the clouds. NTSB broke it down. 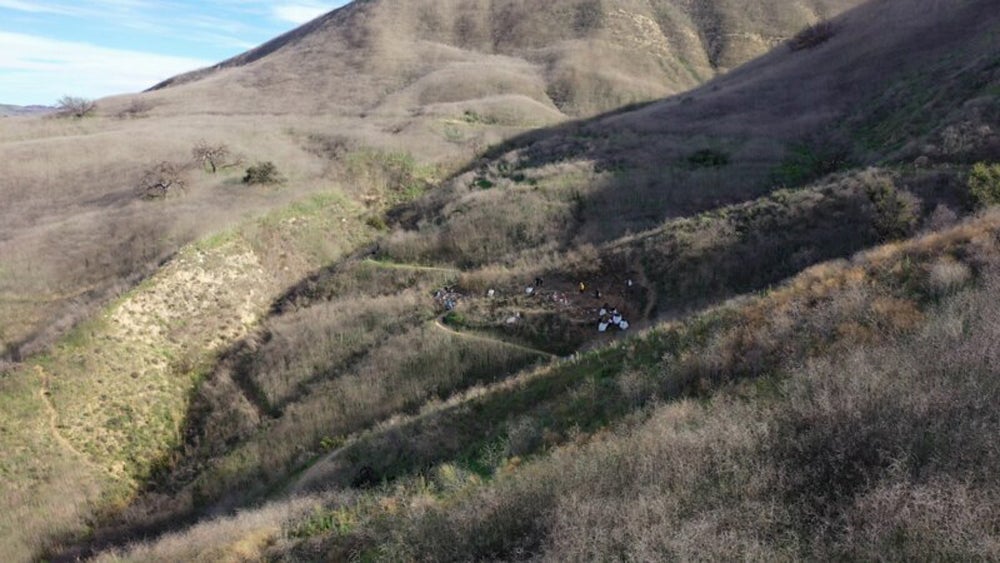 The National Transportation Safety Board on Friday published a number of details the board has gathered from ADS-B tracking data, ground-based video camera footage and witnesses since the January 26 crash of a Sikorsky S76, N72EX, in the hilly terrain near Calabasas, California. The flight, operated under Part 135 by Island Express Helicopters Inc., was carrying NBA star Kobe Bryant, his young daughter, six other passengers and the helicopter’s pilot. All aboard perished in the crash. The helicopter was destined for Camarillo.

At 9:39 a.m., six minutes prior to impact, as N72EX was passing west of Van Nuys at 1,500 feet mean sea level (msl), the Van Nuy’s controller asked the pilot if he was in VFR conditions. The pilot replied, “VFR conditions, one thousand five hundred.” The VNY controller then advised him to contact Southern California Terminal Radar Approach Control (SCT) for radar advisory services. At the time of the accident, the helicopter was technically still operating on a special VFR clearance the pilot had obtained earlier from Burbank, though portions of the route further west were reporting marginal VFR weather. An SVFR clearance requires the pilot to remain clear of clouds at all times. The NTSB said, “At the time of the accident, the automated surface observing system (as augmented by ATC) at VNY, located about 11 nautical miles east-northeast of the accident site at an elevation of about 800 feet, reported a calm wind, visibility of 2.5 statute miles in haze and an overcast ceiling of 1,100 feet above ground level.”

Radar/ADS-B data indicate the aircraft was climbing southwesterly along a course aligned with Highway 101 just east of the Las Virgenes exit, between Las Virgenes and Lost Hills Road. The helicopter reached an altitude of 2,300 feet msl, approximately 1,500 feet above the highway, but below the surrounding terrain when it began a left turn. Eight seconds later, the aircraft began descending as the left turn continued. The descent rate increased to over 4,000 feet per minute while the ground speed reached 160 knots. The last ADS-B target was received at 1,200 feet msl approximately 400 feet southwest of the accident site.

A still photo obtained from a security camera located in a road maintenance yard adjacent to Mureau Road and Highway 101 showed the helicopter proceeding westward along the highway and disappearing into the clouds. Mureau runs just to the north of Highway 101. The Board does not know why the pilot entered the clouds yet.

An ALERTWildfire camera image taken at 0944 PST looking southeast toward the city of Van Nuys, as publicized on the National Weather Service (NWS) Los Angeles Twitter account, depicted the top of the cloud layer to the east of the accident site. The NWS analyzed the top of the cloud layer to be about 2,400 feet msl near the terrain in the foreground of the image. A witness near the impact site saw the helicopter emerge from the clouds headed down and that it began a roll to the left, steep enough that he could see the belly of the aircraft. He judged it to be moving fast, travelling on a forward and descending trajectory. He observed it for 1 to 2 seconds, before it impacted terrain about 50 feet below his position.

There were no outstanding airworthiness directives or minimum equipment list items and all inspections on the helicopter were up to date. The pilot, age 50, had worked for Island Express for about 10 years. According to FAA records, the pilot held an FAA commercial certificate with ratings for helicopter and instrument helicopter, as well as an FAA instructor certificate for flight, instrument, and ground instruction. At the time of his last medical application, he reported 8,200 total hours of flight experience. The pilot logged about 1,250 total hours in the S76 helicopter. His most recent flight review, including proficiency training in inadvertent entry into instrument meteorological conditions (IIMC) and unusual attitude recovery, was conducted in a helicopter with EUROSAFETY International on May 8, 2019. The pilot received satisfactory grades for these maneuvers.

Parties to the investigation include the FAA, Island Express Helicopters, Sikorsky, and the National Air Traffic Controllers Association. The Transportation Safety Board of Canada is participating in the investigation as an accredited representative, as is Pratt and Whitney Canada as a technical advisor. The investigative team was also assisted on scene by numerous other federal, state and local law enforcement and public safety agencies.

The NTSB is expected to require at least a year to complete the final accident report that will include a probable cause.