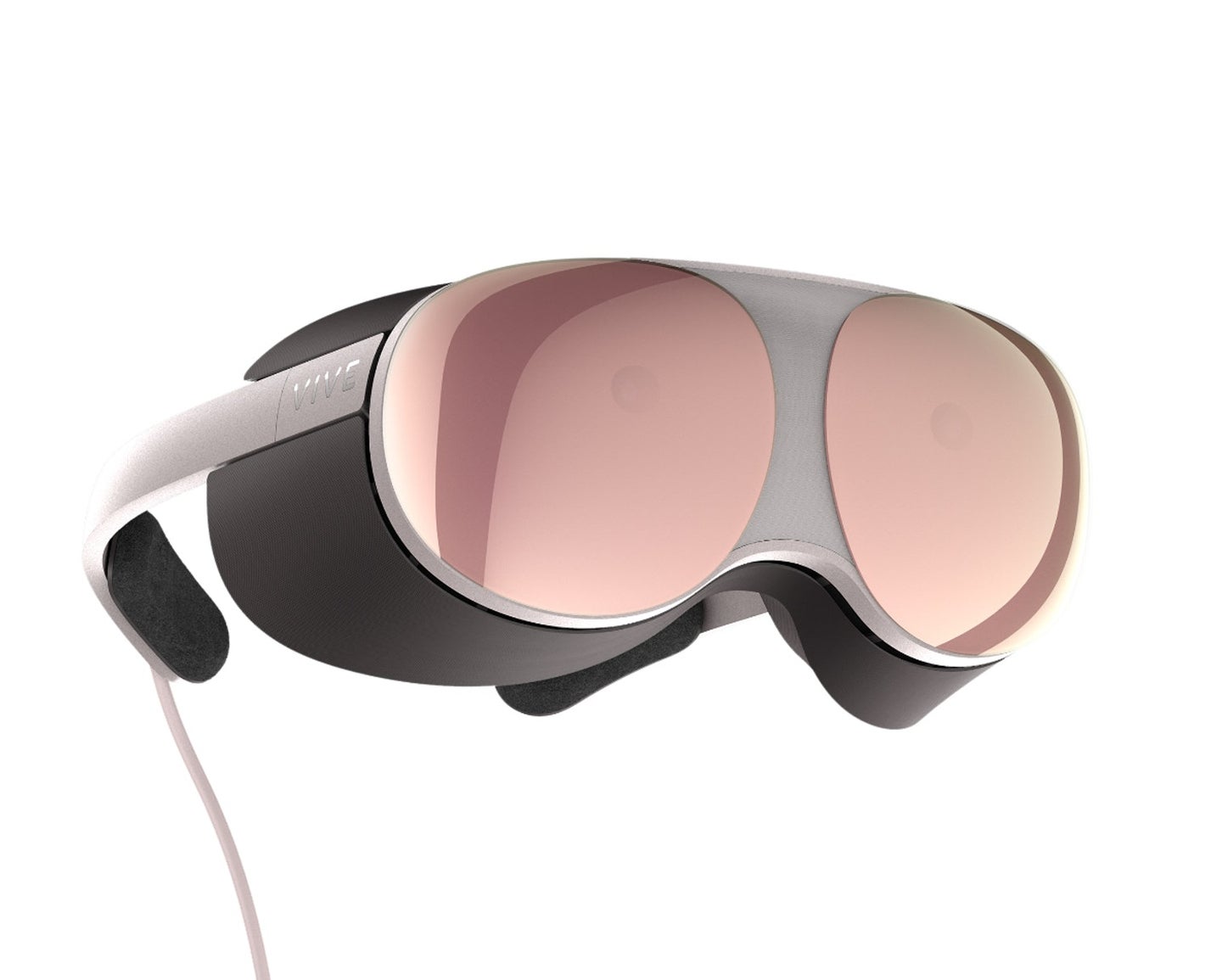 It’s hard to look cool while wearing a VR headset. Even as the electronic guts inside have evolved, the bulky devices still typically resemble drab medical machines or outlandish alien cosplay gear. This morning, however, HTC announced the Vive Project Proton concept headset, which makes the whole package look a lot more modern.

Project Proton doesn’t have any hard specs at the moment—it was clearly designed as a concept to show off at the Mobile World Congress trade show, which was canceled due to concerns over the coronavirus outbreak. While the innards are a relative mystery, the exterior is impressive. It looks like something you’d wear while snowboarding instead of sitting in a darkened room at your house.

Look closely at the renders of the gadget and you can see what look like cameras behind the exterior lenses. Outward-facing cameras help other headsets like the Vive Cosmos and the Oculus Quest track head movement and the location of the controllers as you play. That helps eliminate the need for external motion sensors like HTC’s Lighthouse beacons. In some cases, like with the Cosmos XR, external cameras can also capture the world around you and integrate digital objects to create an augmented reality effect. Augmented reality glasses like the Magic Leap and Microsoft’s Hololens typically use translucent displays to mix real and virtual worlds, which typically makes them slightly more interesting looking devices, but they can’t handle true VR tasks that replace a user’s entire field of view.

There are two versions of the Proton, one that tethers to a smartphone to do the computing, while the other has a self-contained computer in a module that sits on the back of the user’s head. The latter obviously makes some style concessions in the name of efficiency and convenience, but both still look much more stylish than the current crop of VR headgear.

HTC isn’t the only company working on increasing VR’s outward aesthetic appeal. Back at CES 2020, Panasonic showed off a pair of steampunk-inspired concept goggles that actually resembled a pair of sunglasses with some added bulk. It’s important to note that those glasses don’t have the same kind of advanced motion tracking that you’d get from a device like the Oculus Quest or the or the HTC Vive XR, but the technology is getting smaller and more manageable on the whole.

Part of that shrinking effect comes from the looming arrival of 5G. Qualcomm has been promising that its 5G hardware will enable VR powered by mobile phones that can handle the computing and then wirelessly transmit data to a headset, which would eventually eliminate the need for tethering to a PC or attaching more built-in hardware. Right now, however, it’s a mystery as to how exactly that will play out.

Down the road, we’re expecting a VR headset from Apple—rumors suggest a possible 2022 launch. It seems unlikely the designers at Cupertino would be willing to roll out another boxy black or grey headset that blends in with the rest of the current options on the market.

In the meantime, however, HTC released three new Vive headsets as companions for last year’s $699 Cosmos, which lets users swap out modular faceplates to add or change functionality. So, here’s a quick rundown of what the company announced to hold you over until the more stylish options start rolling out.

The new entry-level Cosmos headset uses four outward-facing cameras (down from six in the original Cosmos) to provide inside-out motion tracking in a more affordable package.

Like the original HTC Vive, the Cosmos Elite uses a pair of included motion sensors that live outside of its hardware to detect the headset and controllers as they move. External tracking is typically more accurate than onboard hardware, but it also means more setup around your PC.

In addition to the motion tracking functionality, the cameras on the Cosmos XR can provide a view of the outside world to create an augmented reality experience in addition to the typical VR world, which replaces your field of view completely with virtual landscapes. We’re expecting to hear more about this device at the Game Developer’s Conference later this year. Right now, it will only be available as part of a developer’s kit, so it’s not quite ready for mainstream users just yet.