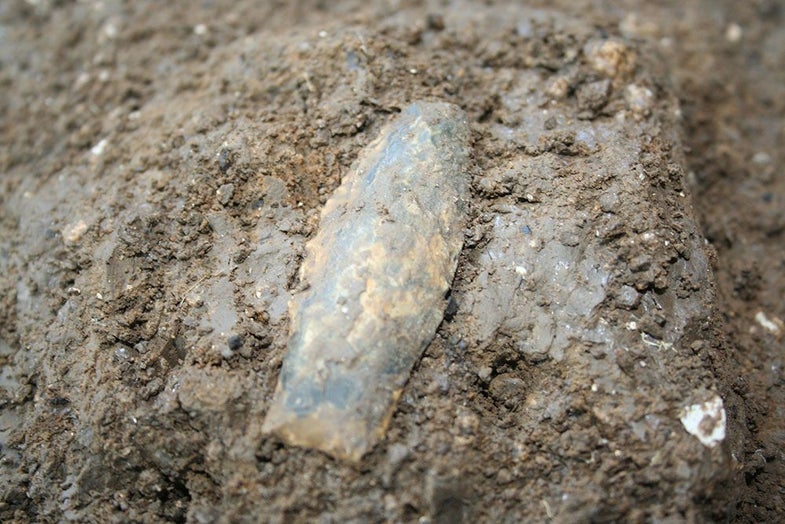 History exists in the past, but that doesn’t mean it’s static. New findings, published Wednesday in Science Advances, illustrate the discovery of a dozen projectile points at the Debra L. Friedkin site from the Buttermilk Creek complex in Central Texas. Those spearheads date back to more than 13,500 years ago, making them possibly the oldest weapons ever found in North America, and also painting a more complex picture of what we previously thought we knew about the continent’s first humans.

Spear points are a pretty iconic aspect of the Clovis, an old culture of Paeloamerican hunter-gatherers. Those points typically date back to between 13,000 and 12,700 years ago, and are lanceolate (leaf-shaped) points made of stone, replete with a concave base that enables them to attach as a spear’s tip. So the discovery of spear points that predate the Clovis is quite a big deal.

“This discovery is significant because almost all pre-Clovis sites have stone tools, but spear points have yet to be found,” says Michael Waters, a geologist at Texas A&M University and the lead author of the new study. “The dream has always been to find diagnostic artifacts—like projectile points—that can be recognized as older than Clovis.” Waters and his colleagues have dug at Buttermilk Creek for many years now. “We were always hoping to someday find a projectile point, but in archaeology, you get what you get.”

It looks like they finally got it. In this latest excavation, Waters and his team unearthed hundreds of thousands of pre-Clovis objects from the Buttermilk Creek site, including hundreds of tools. A dozen of these objects were fragmented and complete projectile points, coming in two varieties: stemmed points between 13,500 and 15,500 years ago, and triangular lanceolate points that are between 13,500 and 14,000 years old. All of them are definitely older than—and unique from—typical Clovis points.

“When we first found that intact spear point we lost our minds,” says Joshua Keene, a Texas A&M researcher and a co-author of the study. “We had never seen anything quite like it, at least not in Texas!”

According to Waters, the gold standard for this sort of work is to find these objects in geological layers beneath where the Clovis objects sit: the lower the layer, the older the artifact. The was precisely the case with this latest discovery—and the findings are bolstered by the fact that the entire prehistoric record of Central Texas is pretty well documented and dated. The team dated the objects more precisely using Optically Stimulated Luminescence (OSL) dating, in which light is used to peg an absolute date for geological sediments.

“A big question that has largely remained unanswered until now is, what did pre-Clovis technology look like?” says Keene. The new objects are distinct from the big leaf-shaped Clovis points, as well as other stemmed points found farther south in Mexico and South America, making them a particularly unique piece of the early human history puzzle.

So to that end, there are two scenarios he and his team think could explain the findings: Clovis lanceolate points may have developed from the stemmed point forms created by pre-Clovis ancestors who found their way into the region earlier; or, a second migration of another culture may have arrived on the scene later on, carrying the triangular lanceolate form that was soon developed into the Clovis point.

The findings “give new strength to support the theory that there very well could have been multiple migrations of people into the new world over thousands of years rather than just one, and that some of the earliest groups moved to Texas, of all places,” says Keene. “These populations pre-dated Clovis, or possibly even turned into Clovis.”

The new study also sheds a bit of light into how unique the Buttermilk site was for early migrants. “They likely came to places like Friedkin because of the extreme abundance of high-quality chert for making stone tools,” says Keene. “In fact, we have a lot of evidence that Friedkin has remained a popular re-tooling spot continuously for nearly 16,000 years.”

“I think they’ve done an amazing job in dating the deposits in the artifacts” and providing a “secure chronology,” says Ben Marwick, an archeologist based at the University of Washington who was not involved with the study. “They’ve invested a lot of effort and it’s paid off very well, and I really think that’s a strength of the study.”

That being said, Marwick also points out the findings have their limits. “The critical artifacts [the authors] based their findings on are small in number. It leaves an unanswered question of whether this is a real pattern of an early technology we don’t know much about, or if it’s just a one-off sort of thing, and maybe there’s just a small number of people deciding to make these sorts of artifacts one afternoon.”

Marwick also notes there’s not a very robust description of the actual clay deposits in the paper, and that pictures seemed to show some vertical cracks in the layers. “It looks like there might be some potential for some of these artifacts to move through the cracks. It’s possible some of the artifacts might have moved down,” and are not as old as we might really believe. Marwick has conducted work in similar archeological sites in Australia, where he and his team have had to anticipate those sorts of possibilities and account for them through microscopic analysis and other testing. “My sense is that that work hasn’t been done here, and I’d look forward to seeing some of that before I get too excited about some of the claims.”

Lastly, while Marwick says it’s possible the points originate from a separate group of migrants, he’s hesitant to put too much stock in that interpretation. “We know that one group can make many different kinds of artifacts. It’s not always really the case that different kinds of artifacts mean different kinds of cultural groups.” There are only a handful of sites within North America that scientists are able to work with, so it’s difficult to come up with conclusions that will apply wholesale to the history of early human migrants in North America. He’s hopeful more research can prove whether or not these kinds of findings are part of a pattern or just a kind of random peculiarity in the field of anthropology.

Nevertheless, Marwick is encouraged by the overall implication of the findings that early technologies in the Americas are more diverse than we previously thought. “It’s a very important part of this new paper,” he says.

“The peopling of the Americas during the end of the last Ice Age was a complex process,” says Waters. “This complexity is already seen in the genetic record. Now, we are starting to see this complexity mirrored in the archaeological record.”