With Operation Popeye, the U.S. government made weather an instrument of war

As geo-engineering projects soar, the declassified project is newly relevant. 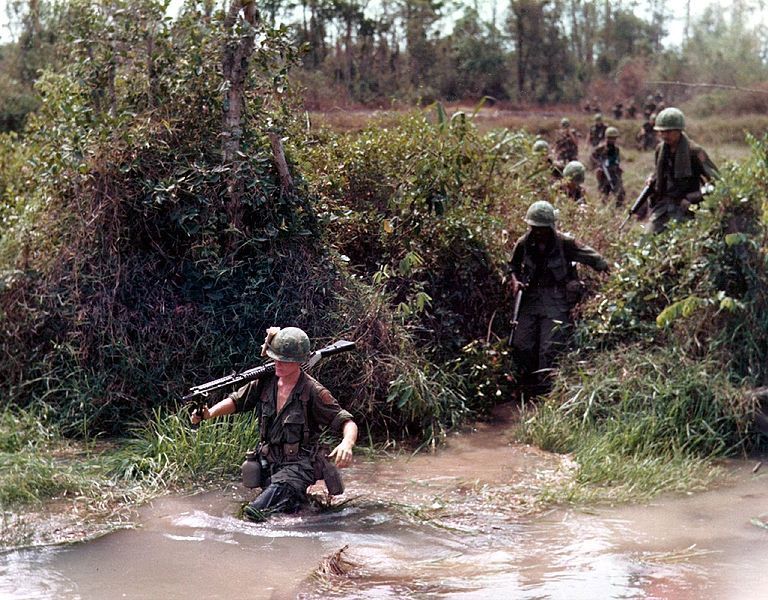 It was a seasonably chilly afternoon in 1974 when Senators Claiborne Pell, a Democrat from Rhode Island, and Clifford Case, a Republican from New Jersey, strode into the chambers of the Senate Committee on Foreign Relations for a classified briefing. While the meeting was labeled “top secret,” the topic at hand was rather mundane: They were there to discuss the weather.

More specifically, Pell, the chairman of the now-defunct subcommittee for Oceans and International Environment, and his colleague were about to learn the true extent of a secret five-year-old cloud seeding operation meant to lengthen the monsoon season in Vietnam, destabilize the enemy, and allow the United States to win the war.

Though it cycled through several names in its history, “Operation Popeye” stuck. Its stated objective—to ensure Americans won the Vietnam War—was never realized, but the revelation that the U.S. government played God with weather-altering warfare changed history. The Nixon administration distracted, denied, and, it seems, outright lied to Congress, but enterprising reporters published damning stories about rain being used as a weapon, and the Pentagon papers dripped classified details like artificial rain. Eventually, the federal government would declassify its Popeye documents and international laws aimed at preventing similar projects would be on the books.

But the public would, more or less, forget it ever happened. Given the rise of geo-engineering projects, both from municipal governments and private companies, some experts believe Popeye is newly relevant.

Most travel agents would recommend planning your visit to Vietnam roughly between the months of November and April. Prices tend to jump during the so-called high season, but it’s the only surefire way to avoid the rain. And, boy, is there rain.

Between roughly May and October, the mercury rises to 90 degrees and the humidity can hit 90 percent. Heavy with water and churned by reversing monsoon winds, the northern metropolis of Hanoi typically receives 8.2 inches of rain in July alone, while Ho Chi Minh City in the south, where the monsoon hits a little later, racks up an average 11 inches each September. (For comparison, the southwestern state of Arizona typically gets 8.04 inches of rain in a year.)

Back in the 1960s, however, Vietnam’s rainfall patterns weren’t the concern of American tourists, so much as the American military. When preliminary tests for Operation Popeye began in October 1966 under President Lyndon B. Johnson, the Vietnam War had been underway for over a decade (though still a decade away from its somber conclusion) and more than 8,000 Americans had already died. With traditional methods failing, the U.S. government decided to look to the skies.

“The close monitoring of troop and truck traffic along routes where rain had fallen verified beyond any doubt the naturally adverse effects of rainfall and accumulated soil moisture on the enemy’s logistic effort,” Lieutenant Colonel Ed Soyster told Senators Pell and Case, according to the declassified notes from that 1974 meeting. Operation Popeye, he continued, intended to further ruin roads, jam rivers, and extend the amount of time swathes of Vietnam weren’t traversable.

Cloud seeding is a method for artificially stimulating precipitation, like rain or snow. The practice is thought to have originated in 1946. While experimenting with dry ice, Vincent Schaefer, a self-taught chemist employed by General Electric, made a big discovery. He noticed that cloud condensation nuclei—the tiny particles around which water condensates—could be artificially produced to create rain and snow. Schaefer put his discovery to the test by “seeding” the clouds over the Berkshire Mountains in Massachusetts and successfully created precipitation. “He was hailed as the first person to actually do something about the weather and not just talk about it,” the New York Times wrote in his obituary.

Of course, Schaefer’s discovery was not met with enthusiasm alone. While some dreamed of ending drought (or, as the Times drolly notes, ensuring white Christmases until the end of time), others worried that rain would be “stolen,” as scientists pulled precipitation out of clouds in some places and not others.

At first, no one seemed to consider the wartime applications of cloud seeding, but on March 20, 1967, the “operational phase” of Popeye began. Pilots and their crew would soar over select regions of Vietnam with a canister of silver or lead iodide, which were, by the 1960s, considered two of the primary sources of water condensation nuclei. The plane crew would ignite the canisters and release particle-rich smoke into an existing storm. If all went well, the jolt of artificial nuclei would reverberate through the system, forcibly spurring additional precipitation.

Despite 80 years of cloud seeding efforts, rigorous research aimed at proving (or disproving) its efficacy is still underway. During their top secret briefing on Popeye, Senators Pell and Case were told that though U.S. taxpayers paid, without their knowledge, some $3.6 million a year for such operations over Vietnam (or about $23 million a year in today’s dollars), Popeye’s success was “certainly limited” and also fundamentally “unverifiable.”

As he digested these facts—processed the full extent of the secret wartime weather manipulation project—Senator Pell seemed increasingly indignant, as documented in the official meeting report. Why, he asked, was it kept secret? And what other secrets were there? “The thing that concerns me,” Pell said, “is not rainmaking per se, but when you open Pandora’s box, what comes out with it?” When the details of Operation Popeye were made public a two months later, on May 19, 1974, many Americans—as well as our allies and enemies abroad—were left pondering the same question.

As you read this, somewhere, someone is probably seeding a cloud. State and city officials seed clouds in the Sierra Nevada each winter. It’s a way to make a little money from ski resorts that pay for the potential of an extra sprinkling of powder. But it’s also a coordinated effort to increase the water supply that flows from melting snow each summer and quenches the thirst of California and its neighbors in the Colorado River Basin. And local officials from Wyoming to Mumbai carry out summertime seeding to provide rainfall for farmers. Meanwhile, the Chinese Meteorological Association is the world’s biggest cloud seeding operation, reportedly creating billions of tons of rain each year to the tune of hundreds of millions of dollars.

These peacetime efforts are perfectly legal. But after the details of Operation Popeye went public, legislators began to push for an international treaty that would ban weather modification from being used in warfare ever again. As is so often the case, the law originated in the United States, among the very people who had been secretly testing and, arguably, benefitting from the technology in the first place. U.S. officials approached the former Soviet Union about an international agreement, which passed through the United Nations in 1976 and entered into force in 1978.

Called the Environmental Modification Convention, the international treaty bars any action undertaken by military or otherwise hostile forces that could result in “earthquakes, tsunamis; an upset in the ecological balance of a region; changes in weather patterns (clouds, precipitation, cyclones of various types and tornadic storms); changes in climate patterns; changes in ocean currents; changes in the state of the ozone layer; and changes in the state of the ionosphere.” The convention is, in effect, so comprehensive it bans many forms of weather modification that, at least according to publicly-available knowledge, do not yet exist. While there’s an elaborate 12-step WikiHow for a tornado in a bottle, storms don’t appear to be that easy to create—or, for that matter, stop—in the real world. Cloud seeding, if and when it works, is successful only because it piggybacks on existing weather, rather than creating new storm fronts from scratch.

But Deborah Gordon, director of the energy and climate program at the Carnegie Endowment for International Peace, says the convention is ultimately toothless. “You don’t even know where to look,” she says of current weather manipulation efforts. “There’s a lack of transparency in the research. We don’t even know what people are working on. You can’t govern something you can’t see. And that’s for peaceful applications.” Without the ability to measure these modifications, the Environmental Modification Convention or any other weather-related treaty is nearly impossible to enforce. “How will we know that there aren’t Operation Popeyes… going on or not?” she asks.

Given our inability to monitor these activities, there’s reason to be concerned that the United States or other nations could quietly violate the terms of the convention. But, Gordon says, the more pressing question is whether thousands of small-scale environmental modification projects already underway will eventually add up to global impact. “It didn’t matter [that there was no transparency], because there were so few projects,” Gordon says of the 20th century. But “in the last decade,” she says, “the uptick in experimentation in terms of climate engineering has not only picked up from the government’s point of view… it’s now picked up in the private space.”

A Bangalore-based company Kyathi Climate Modification Consultants leads the rainmaking project in Mumbai, for example. Kyathi technicians were, in turn, trained by the North Dakota-based company Weather Modification Inc., which has had a hand in weather modification efforts from Mexico to Morocco. In recent years, Gordon says, we’ve also seen the move beyond privately-led weather-altering schemes to climate-altering ones. Big corporations like Shell, as well as dozens of smaller startups like Carbon Engineering, have developed and begun to implement carbon capture technology. While these peacetime projects are all intended only to benefit the local community, they’ve become so widespread they could have an affect at a planetary scale. “If there’s enough local weather modification,” she asks, “at what point does that add up to more than the sum of its parts?”

Most of the officials involved in Operation Popeye are now dead. And while weather modification is real (and the subject of troves of scientific literature), it’s also fuels endless conspiracy theories, from the Cold War-era concern that the Soviets would control the temperature of the globe to contemporary InfoWars-stoked fears of weather-wielding superpowers.

But the real concern, Gordon says, is our rapidly changing climate and its effects on global water systems. As Cape Town stares down the end of its water supply and floods and droughts destabilize communities all over the world, she says, we’re starting to “realize now how little we know about the atmosphere.” New climate-altering technologies will continue to crop up. But instead of providing us with easy answers to our biggest problems, these developments should seed new questions.