“It’s an explosion of flavors!” one commando gushes. 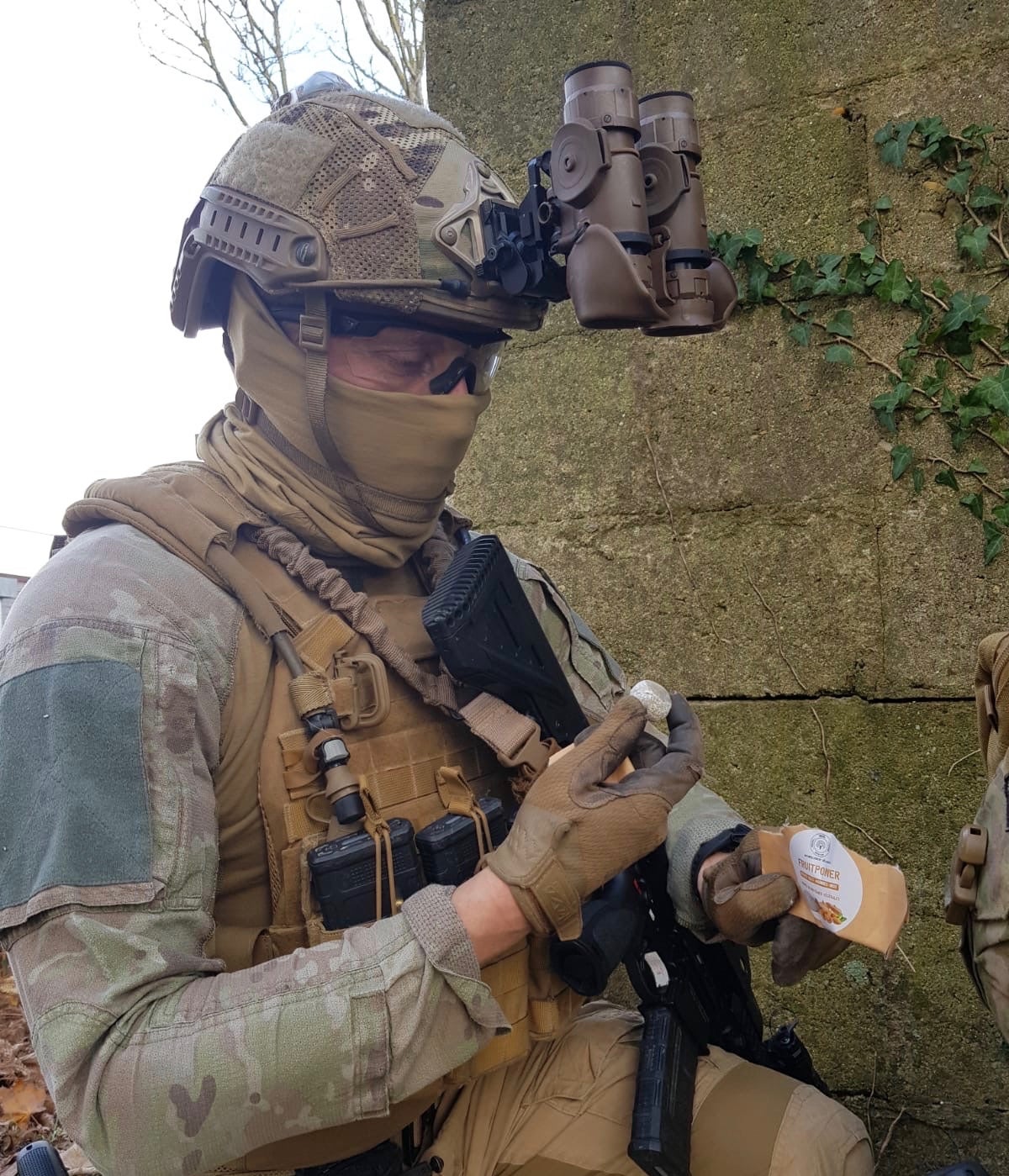 A soldier holds one of the energy balls. MOS Nutrition
SHARE

The French armed forces are renowned the world over for their sophisticated combat rations—their version of American MREs.

Still, troops on operations, particularly special forces soldiers, will lose weight if they expend more energy than they get from the calories they ingest. So their militaries provide snacks in addition to their meal rations. But French soldiers apparently don’t much like these, so instead they buy candy bars. Now imagine the state of one of these bars after it has spent a few hours stuffed into a sweaty pocket or jammed into a backpack in intense hot or cold conditions: squashed, sticky, crushed into crumbs, melted, or—on the contrary—frozen solid.

This was the problem that Mélanie Oullion-Simon, a 25-year old dietician and nutritionist with two years of medical studies under her belt, decided to solve. Her interest in feeding soldiers arose when she was doing a masters in entrepreneurship jointly run by two of France’s leading universities: HEC, a business school, and Polytechnique, a scientific and engineering military school. Among her teachers at the latter was a French navy submarine captain.

The submariner suggested she use her nutrition background to look at combat rations. So she did three things: first, she questioned 260 soldiers. She wanted to know what food they liked, particularly while on missions outside France; she looked at what they didn’t eat in their combat rations, what personal foods they took with them, and what foods they found pleasurable. She then read scientific studies on military nutrition and followed this up with ground research, spending almost a year with troops.

“People talk of technologically augmented soldiers—I talk of nutritionally less incapacitated soldiers,” she says with a smile. That’s because she estimates that they spend about 4,000 calories a day, while NATO puts that number for combat or special forces operators at about 4,900 calories a day, and in cold weather these energy requirements exceed 6,000 calories. But the French daily rations are only 3,500 calories.

As a single-woman startup, she wasn’t about to replace the French armed forces combat rations, but she thought she could do something about the all-important snacks by developing one that would be “practical, healthy, effective and natural” and would give soldiers, whom she compares to high-performance athletes, an energy boost while awaiting their next “proper” meal.

“It had to be something that they wanted to eat, that wouldn’t melt or crumble, that is not sticky, that would remain edible even if it was squashed, that would provide the calories these superheroes need,” she explains.

She worked out two basic recipes in her mother’s kitchen: one with figs, dates, almonds and walnuts, and the other with hazelnuts and dark chocolate. Each has a smattering of caffeine or theine for that extra energy kick, and vegetable proteins. The ingredients are rolled up and covered with a rice-based coating to form a ball, slightly smaller than a ping-pong ball but slightly bigger than a large marble. Each ball weighs one ounce and provides 50 or 65 calories, depending on the recipe. A serving is made up of two.

Oullion-Simon has called them MOS Energy Balls and her start-up company MOS Nutrition. MOS stands both for “military optimized superfoods,” and her name.

Over 2,000 soldiers, including from the United States Air Force, and French and European commandos, and some athletes, have tested them. France’s 1st Marine Infantry Parachute Regiment has adopted them outright.

One French navy commando, Petty Officer Matt, gushes: “It’s an explosion of flavors! You even get the crunch of the hazelnut. You get the feeling that you’re eating something healthy, not stuffed with sugar. They’re easy to chew. During long and exhausting static exercises, they are a moral booster!”

Recently a navy commando diver even ate them underwater, after removing his mask.

Oullion-Simon has now developed another eight variants and is working on salty snacks and an edible wrapper. She also needs to improve their shelf-life from the current month to six months. And, of course, she needs to industrialize—because until recently she was still hand-rolling them in her mother’s kitchen. She now has a machine which should help keep up with the demand.