The plan is for at least 60 percent of the flying machines that take off and land from carriers to be uncrewed, like the MQ-25 Stingray. 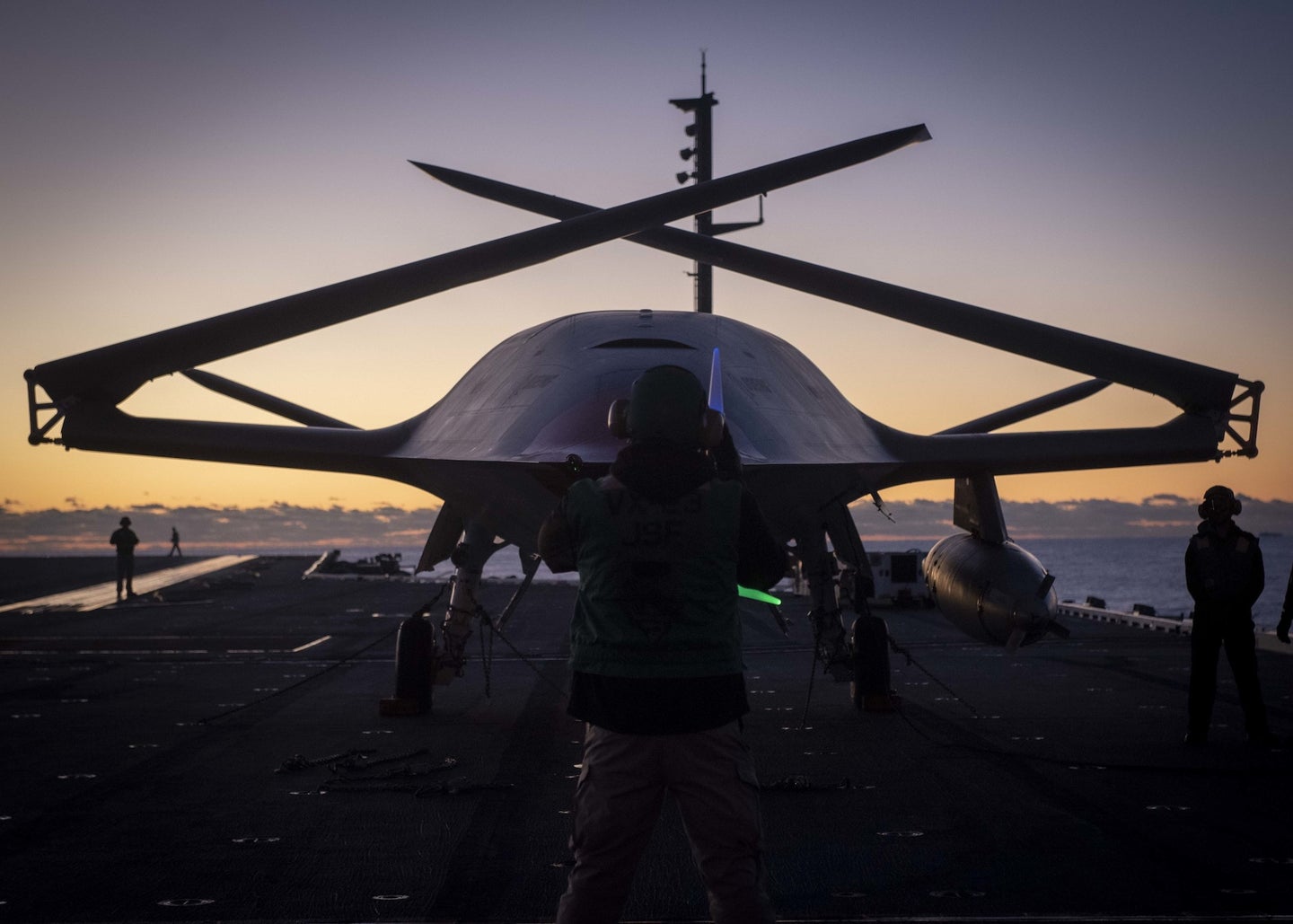 When it comes to equipping the aircraft carriers of the 21st century, the US Navy wants a mix of aircraft that is at least 60-percent uncrewed. This goal was “outlined by multiple officials during updates at the annual Tailhook Association symposium in September,” reports Aviation Week, referring to the conference held by a fraternal order of Naval Aviators, the pilots who presently and previously performed the kind of job that the Navy intends to shift mostly to robots.

The Navy has made no secret of its intentions to move towards more uncrewed aircraft flying on and off of carriers. In March 2021, Vice Adm. James Kilby told the House Armed Services committee that “we think we could get upwards of 40 percent of the aircraft in an air wing that are unmanned and then transition beyond that.”

Shifting from 40 to 60 percent is a substantial leap, though it’s of a piece with the overarching strategy for how the Navy intends to incorporate and expand the use of uncrewed vehicles in the coming decades. In the 2022 Navigation Plan, the Navy’s longer-term procurement strategy document, the Navy said that by the 2040s it is planning to field “Aircraft for anti-submarine and anti-surface warfare, to include helicopters and maritime patrol and reconnaissance aircraft, all augmented by unmanned aviation systems” with a capacity goal of “approximately 900.”

For the Navy, much of its uncrewed aviation plans hinge on the continued success of the MQ-25 Stingray tanker drone. The Stingray’s mission is to take off from a carrier deck, and travel with fighters like the F/A-18 jets part of the way to their mission. Then, the Stingray is supposed to top off the fuel tanks of the jets while they’re already airborne, extending the functional range of those fighters. This is a mission at present performed by specially equipped F/A-18s, but switching the refueling to a specialized uncrewed aircraft would free up the crewed fighter for other missions.

In June 2021, a Stingray successfully transferred fuel from an external storage tank to a fighter in flight for the first time, and testing of the aircraft continues, with the Navy expecting the drones to enter service in 2026. While not as flashy as the combat missions Navy drones may someday fly, the tanker missions require mastering the ability to take off from and land on carrier decks, as well as the ability for an uncrewed vehicle to coordinate with human pilots in close contact while airborne. If the airframe and its autonomous systems can accomplish that, then adapting the form to other missions, like scouting or attack, can come in the future.

Adding uncrewed aircraft can potentially increase the raw numbers of flying machines fielded, as autonomous systems are not limited by the availability or capacity of human pilots. The uncrewed aircraft can also be designed from the start without a need to accommodate human pilots, letting designers build airframes without having to include space for not just cockpits but the pilot safety systems, like ejection seats, oxygen, and redundant engines.

By saving the labor of piloting by shifting towards autonomy, and saving space on an aircraft carrier through denser uncrewed design, roboting wingmates could allow ships to put more flying machines into the sky, without needing to have a similar expansion in pilot numbers or carrier decks.

[Related: The US Navy floats its wishlist: 350 ships and 150 uncrewed vessels]

The Navy’s intention has parallels across the Department of Defense. In September, DARPA announced ANCILLARY, a program looking for a versatile drone that could fly from rugged environments and ship decks, without any need for additional infrastructure. GAMBIT, a program by defense contractor General Atomics, is pitched to the Air Force as a way to develop four different drone models from one single core design, allowing cost savings and versatility with shared parts.

Beyond those speculative programs, the Air Force has worked to develop semi-autonomous drones that can receive orders from and fly in formation with human-piloted planes. This Loyal Wingmate program is aimed at expanding the number of aircraft, and in turn sensors and weapons, that can be flown in formation, again without expanding the number of pilots needed. It also allows the Air Force to develop a rotating cast of uncrewed aircraft around existing crewed fighters, with hoped-for shorter production timelines and rapid deployment of new capabilities once they’re developed.

[Related: A guide to the Gambit family of military drones and their unique jobs]

The Navy’s ultimate vision, one suggested at 40 percent uncrewed and necessitated at 60 percent, is that the new robotic planes perform well enough to justifying their place in carrier storage, while also being expendable enough that they can take the brunt of risk in any conflict, sparing human pilots from exposure to enemy anti-aircraft weaponry. A shot-down pilot is a tragedy. A shot-down drone is just lost equipment and the ensuing paperwork.