A pilot passed out while flying an F-15 over Oregon. Here’s what happened next.

A fighter jet doesn’t need to crash to suffer millions of dollars of damage. 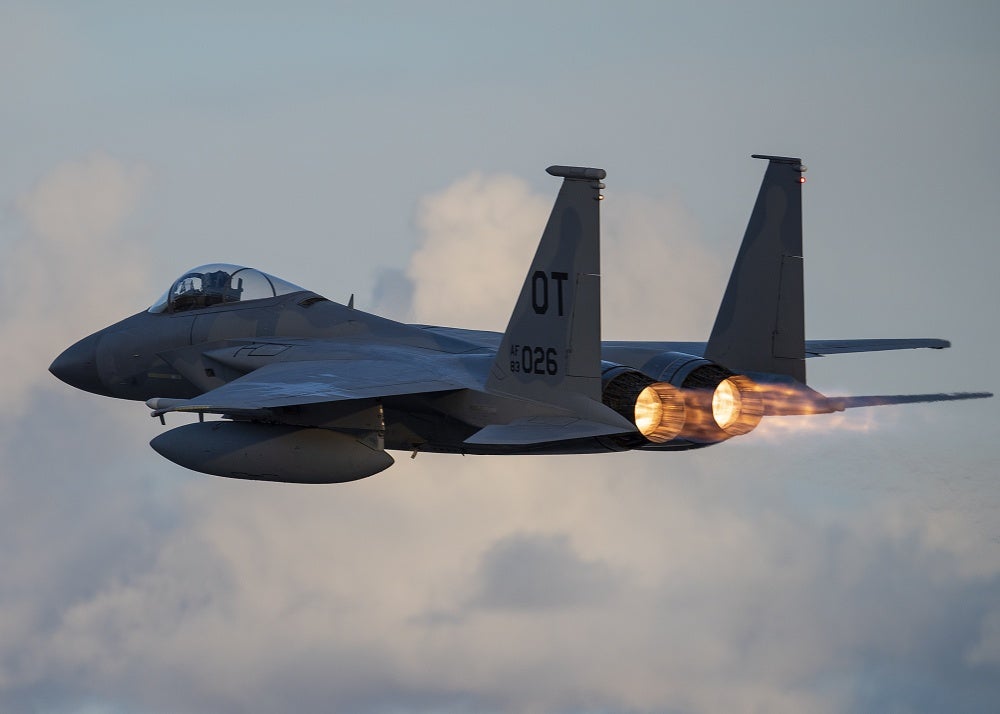 An F-15C on an unrelated flight over Nevada in November, 2019. US Air Force / Airman 1st Class Bryan Guthrie
SHARE

In late March of 2019, in a military operating area over Oregon, a student pilot and an instructor were conducting a two-aircraft training mission on basic fighter maneuvers. Each aviator was in their own F-15C jet. It was early afternoon, and the aircraft were at about 18,000 feet. The student made a turn, and during that maneuver, began to experience G-forces. About six seconds into that turn, those Gs caused blood to travel downwards from the pilot’s head, and the student passed out.

Eleven seconds later, after waking up, the pilot began to recover by putting engines to idle, and pulling back on the control stick. It was the correct course of action, according to the Air Force, but that maneuver subjected the jet to more stress than it was structurally designed to withstand. It endured a phenomenon called “over G-pull.” The wings, tail, and fuselage were all seriously damaged by the incident, adding up to a cost of more than $2.5 million. The Air Force has still not decided precisely what to do with the aircraft. (F-15C models cost $29.9 million, in 1998 dollars.)

Both F-15s landed safely, and neither pilot involved in the mission was injured.

The incident highlights the extreme forces that fighter pilots must manage as they operate high-performance aircraft. The student experienced G-induced loss of consciousness, or GLOC. The Air Force Safety Center carefully tracks how often pilots pass out, and in the last fiscal year—from October 1, 2018 to September, 30, 2019—there were 12 incidents, a small increase from past years. The 10-year average, according to the Safety Center, is about seven GLOC incidents per year. A majority of them involved students, and the one in Oregon was the only event that caused damage. Five of the 12 took place in F-16s, while others occurred in trainer aircraft like the T-6 or T-38, and one in an F-22.

The mid-air incident, not previously publicly reported, is also an example of the type of event the public doesn’t routinely hear about, because it didn’t result in a crash. Popular Science learned about the incident through inquiries to the Air Force Safety Center. (The Air Force Safety Center notes that all GLOC events are investigated and that it’s an area in which they want pilots to remain vigilant about understanding.)

Fighter pilots have two major tools at their disposal to prevent them from passing out. The first is a tight garment called the G-suit, which squeezes an aviator’s legs and abdomen using air pressure, like a blood-pressure cuff. It connects directly to the jet itself, so the aircraft automatically determines when to engage it, and how much pressure to employ, based on how many Gs the pilot is feeling. The second is a muscle and breathing exercise called the anti-G straining maneuver, or AGSM: a pilot will flex and strain muscles in the legs, abdomen, and glutes. Both the G-suit and the AGSM work together, keeping the blood in the pilot’s brain and core and preventing it from pooling down below.

Military pilots use these tools while performing maneuvers—such as hard turning—to ensure they stay conscious, and it’s very hard, physical work. The goal, of course, is to avoid passing out. A pilot who succumbs may wake up to realize that everything is fine, but it can also lead to a crash, or the type of incident that took place in Oregon.

“All the training that they do, and all the anti-G-straining maneuvers, and all the equipment, is designed to prevent this from happening,” says Cheryl Lowry, a physician, expert in aerospace medicine, and a retired Air Force colonel.

But different factors can cause a pilot to experience a GLOC anyway: the pilot could do the AGSM incorrectly, the equipment could malfunction, or he or she could have a health or medical issue. Dehydration can increase an aviator’s chances of passing out, too. In this case, the Air Force says the cause of the GLOC in March was identified, but falls under “Privileged Safety Information” and is not releasable to the public. Another GLOC event in the same fiscal year occurred when the air hose that connects the pilot’s G-suit to the jet became disconnected.

Before maneuvers that will subject an aircraft and its crew to Gs, pilots complete a “G-awareness exercise”—a series of turns to test whether or not the machine, and people on board, can properly handle the stress. In the Oregon incident, the aircraft did indeed carry out the G-awareness exercise first.

The mishap resulted in the creation of an Air Force Safety Investigation Board report.

“The safety system has gotten better, and it’s more automated,” Lowry says. In the past eight to 10 years, the Air Force has created a “trackable database” where events like GLOCs reside, she notes.

The incident in March, she says, highlights the perils of the job, even when not flying in combat.

“Despite good training, and good aircraft, and good procedures, things still happen,” she adds. “It’s a very dangerous line of work, and it’s important that we continue putting money and effort towards training and selecting the right people.”

Update on February 24: Military.com reports that the jet experienced more than 12 Gs of force during the incident.