Refueling B-52s in the sky is hard, so the Air Force is trying VR simulators 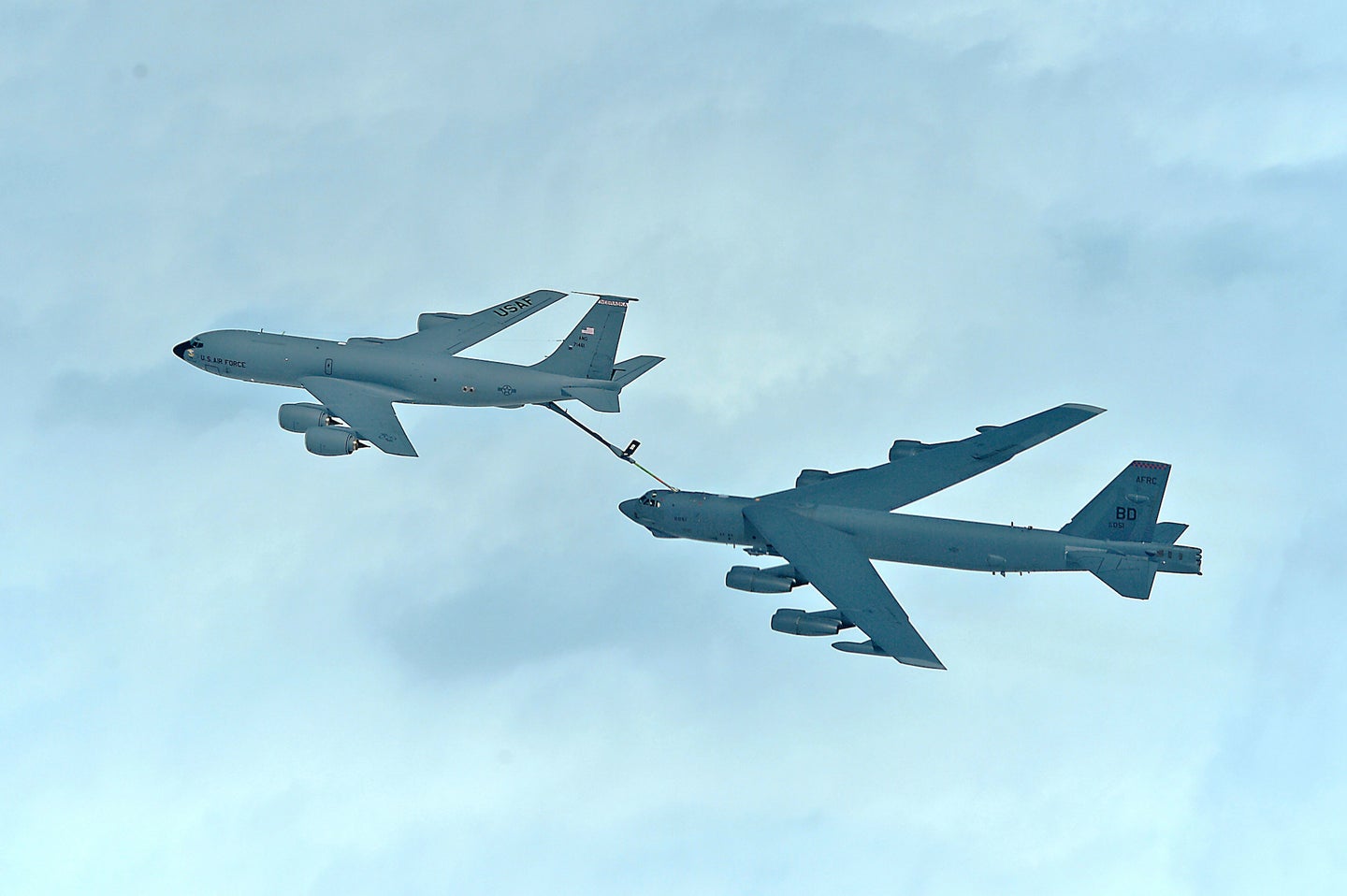 Maneuvering a lumbering B-52 bomber is challenging under normal circumstances. The nuclear-capable bombers are old—they date to the early 1960s—and are sluggish and heavy to control. That difficulty grows significantly when executing a singularly complex task: Flying it behind a tanker airplane to receive fuel while in the sky. The muscle work involved is enough to give a pilot a blister on their hand.

“At the end of air refueling, you’re literally sweating,” a B-52 pilot once told me.

The aviators who carry out aerial refueling need to first learn how to do it well, of course. “For the maneuvers that we teach our initial pilot candidates, it is the hardest,” says Maj. Mark Budgeon, a B-52 instructor pilot with Air Force Global Strike Command.

The fact that it’s so hard, plus the expense involved with getting an eight-engine B-52 in the air for training, has spurred the Air Force to explore new designs for an advanced simulator for refueling practice on the ground.

When an aircraft moves in behind and below a tanker, it gets close enough to technically be touching a piece of the other plane. A boom extending out from the tanker, which carries the fuel, will physically connect with an inlet on the top of the B-52. And when those two planes are that close, the aerodynamics involved can get funky. A simulator has to successfully capture that to be useful to aviators in training. “You have to have the right aerodynamic models, so that you get an accurate portrayal of what effects happen when you get one aircraft close to another,” says Donna Senft, the chief scientist with the Air Force’s Global Strike Command, which is based at Barksdale Air Force Base in Louisiana.

The presence of the tanker can affect how the B-52—which is also known by its nickname, the BUFF—performs. In a more extreme scenario, imagine if a pilot were to fly the bomber directly beneath the tanker instead of staying behind it. The presence of the BUFF below the tanker could affect the air pressure between the two aircraft, and confuse the tanker’s sensor system. That might then cause the tanker’s autopilot to fly the plane downwards, which could cause a crash. “That’s just one example of how the aerodynamics between the two affect the way that you fly, because you won’t see that effect if you’re flying by yourself,” notes Lt. Col. Warren Carroll, a B-52 instructor pilot and the director of innovation for the 307th Bomb Wing.

The new simulator will combine a few elements, and the Air Force is in the process of soliciting ideas from outside industry to see what they can come up with via an office called Strikewerx, which is an innovation-focused broker between Global Strike and the outside world. The system will include physical hardware—such as an actual yoke and throttle for the student to grip—plus a visual element that could make use of virtual reality, or mixed reality, to simulate what the pilot would see. An AI instructor of some kind would coach the learner. Unlike an already existing B-52 simulator at Barksdale Air Force Base, which can physically move to simulate the plane’s motions (it’s a large machine I once had the chance to try), this new solution will not have hydraulics that make it dynamic. It will also be less pricey, and tuned for the midair refueling challenge.

Simulator tech evolves forward, even as the B-52’s airframe ages. The future simulator will utilize virtual-reality-type tech; the current one is a big, dynamic beast; and an older one designed to teach air refueling was much more analog. Russ Mathers, a former bomber pilot who now directs Strikewerx, remembers a contraption from the 1980s that included a model of the KC-135 tanker aircraft that had a wingspan of around 4 feet. A camera could move on a track in the direction of the model. “That image [from] that camera would be broadcast into that trainer you’re sitting in,” he recalls. “You would maneuver that camera to get closer to the plastic model.”

Air Force Global Strike Command hopes to have a prototype for the new system working by next summer’s end. And since it would be a self-contained teaching unit, it’s the kind of system that pilots who are learning to fly could hop into and practice. “I think the students would want to have it at their disposal,” says Budgeon.

And while the B-52 is old, the Air Force has good reason to train pilots to be capable of refueling them in flight. Of the three bombers in its inventory (the B-1 and the B-2 are the others), the BUFF is the only one it hopes to keep flying until about 2050. A new stealth bomber, the B-21, will join it at some point.