Opulence and displays galore: Meet the EQS 580 EV and its ‘Hyperscreen’

A luxurious new electric sedan from Mercedes-Benz boasts a cushy ride and a sleek, futuristic interior. Here's what it's like to drive. 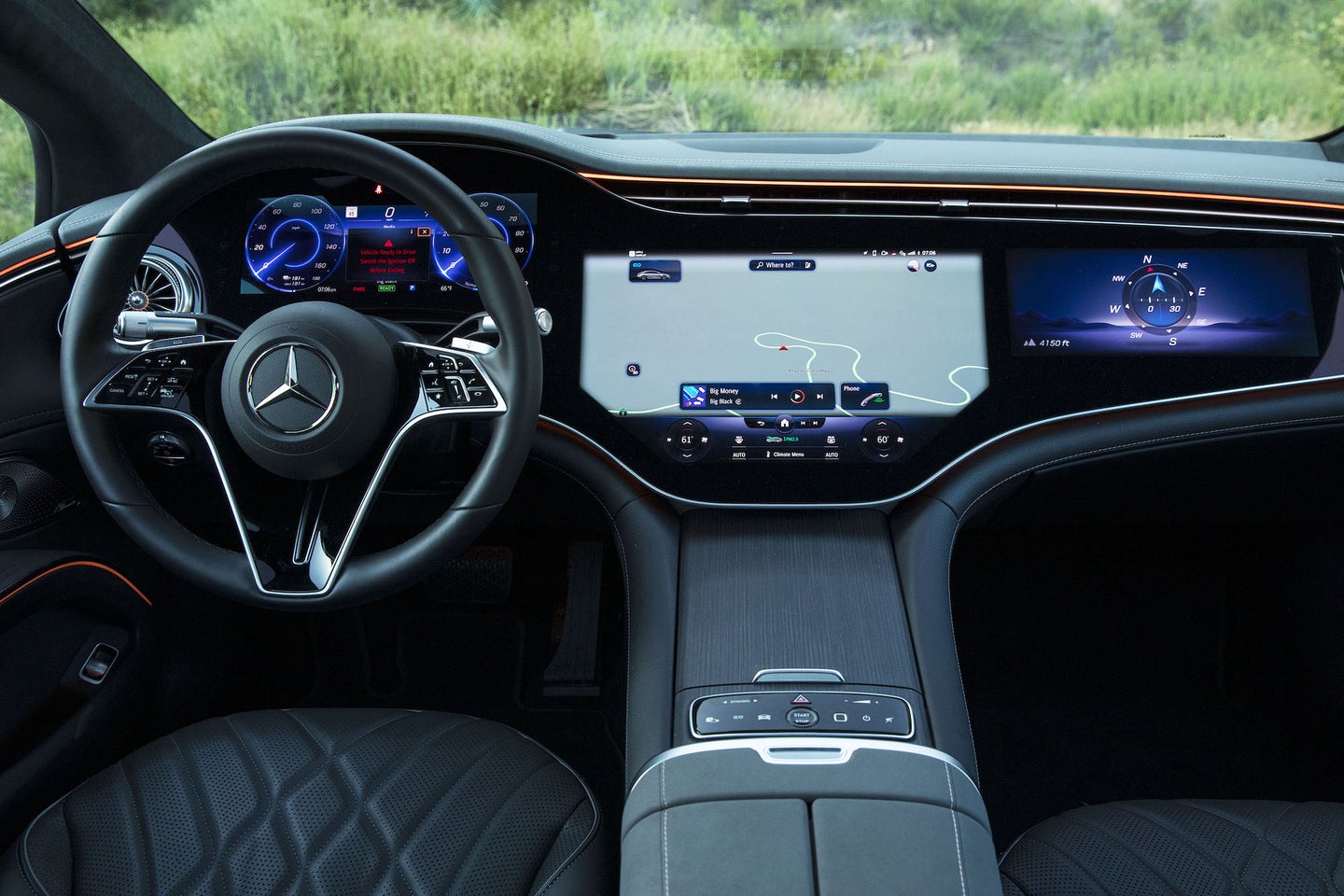 The interior, and its sprawling screens. Bradley Iger
SHARE

Like many automakers, Mercedes-Benz is currently undergoing a metamorphosis. With increasingly stringent emissions and fuel economy rules set to go into effect over the coming years, brands throughout the industry are directing incredible amounts of money and engineering muscle at powertrain electrification and EV platform development. Mercedes’ goals are more ambitious than most, though, with the company targeting a fully electric lineup not only for Mercedes-Benz, but also its high-performance AMG subdivision, as well as its ultra-luxury Maybach brand by 2030—although that plan comes with a “where market conditions will allow” caveat.

The EQS line represents the company’s opening volley in the full-size luxury EV segment, and it’s clear from the posh amenities and the array of technologies onboard our test car that the company is taking this small-but-growing segment seriously. And as the game plan in the car-making business typically goes, the stuff onboard today’s flagship will make its way into more accessible vehicles as time goes on. For example, new iterations of the S-Class have often foreshadowed what’s coming for brand’s E-Class and C-Class vehicles down the road, and in the case of the EQS, it previews some of the hardware that we can expect to see in the less expensive models that are on the way.

After a week spent with this electric luxury sedan, we can say that the future does indeed look promising. But in the case of the EQS specifically, it seems like Mercedes is more interested in appealing to existing high-end EV owners than bringing traditional luxury car buyers into the fray, and that design philosophy is a sword that cuts both ways.

The exterior of the EQS 580 is a showcase of technical prowess. The car’s shape is owed to an extensive amount of aerodynamic testing, efforts that resulted in a slippery 0.20 drag coefficient that’s one of the best in the industry today. Standard 21-inch wheels and AMG Line exterior accents give the bodywork additional personality, but the teardrop silhouette is what truly defines the look of the EQS. We like how streamlined and distinctive it is, but aesthetics also tend to be a largely subjective endeavor.

On the powertrain front, a pair of AC permanent-magnet synchronous electric motors send 516 horsepower and 631 pound-feet of torque to all four wheels while a 107.8-kilowatt-hour battery pack offers up 340 miles of range. The EQS can recharge at 9.6 kW on AC or 200 kW on a DC fast charger, the latter of which will bring the battery pack from a 10 percent charge state to 100 percent in 31 minutes. Mercedes-Benz has also partnered up with Electrify America to provide new EQS owners two years of complimentary charging at their stations.

The big sedan rides on an air suspension that’s paired with adaptive dampers for a greater range of adjustability. Rear-axle steering also comes standard, and the system provides up to 10 degrees of steering angle to reduce the vehicle’s turning circle during low speed maneuvers. At speeds above 37 MPH the rear wheels steer in phase with the front wheels to provide more responsive handling and improve high speed stability.

An array of safety features like Active Lane Keeping Assist, Active Steering Assist, and Active Blind Spot Assist are also part of the deal, along with a surround-view camera system that makes positioning the car in tight parking spots easier.

That’s all impressive stuff, but the cabin is where the EQS 580 really stakes its claim in the full-size luxury EV space. The centerpiece is what Mercedes-Benz has dubbed the Hyperscreen, a trio of displays that consists of a 12.3-inch digital gauge cluster in front of the driver, a legitimately stunning 17.7-inch OLED center infotainment display, and an additional 12.3-inch touchscreen for the front passenger, all of which are housed behind a single piece of glass.

The Hyperscreen and MBUX interface are a pleasure to use, offering fast input response, an intuitive menu layout, and gorgeous graphics, and that’s particularly important because the majority of the vehicle’s features are accessed through that interface.

The problem is, the other controls found inside the car are all capacitive touch surfaces rather than physical buttons and knobs. That helps the interior of the EQS 580 achieve an uncluttered, futuristic vibe not unlike what you’d find in a Tesla Model S. But in practice it also makes it more cumbersome to, for instance, lower the volume or skip the current audio track than it would be if conventional controls were present. (Actions like these take place via touch sliders on the steering wheel, or on the center display, or both.) This is a different approach from what Ford has taken on the Mustang Mach-E, for example, which still retains a physical volume knob.

We warmed up to it a bit over time, but adjustments still rarely landed where we wanted them to while in motion and often required taking our eyes off of the road in order to get things sorted. In some ways it speaks to a larger mindset that’s focused on appealing to expectations of existing high-end EV owners as opposed to those of mainstream buyers who may be considering making the jump to an electric vehicle.

The EQS is more or less positioned as the S-Class of the Mercedes-Benz EV lineup, and as such, it’s more focused on cocooning its occupants in opulent comfort than delivering a thrilling driving experience. The air suspension is softly tuned, and that compliance effectively absorbs all of the imperfections found throughout LA’s system of ramshackle roadways. There’s a trade-off for that cushy ride quality, though—out on the twisting tarmac of the Angeles National Forest the handling of this nearly-three-ton sedan isn’t particularly inspired, even when the dampers are firmed up in the vehicle’s Sport drive mode. But that’s a task better suited to the AMG model anyway.

Although it doesn’t pull like a Porsche Taycan Turbo S or the absurdly-quick Tesla Model S Plaid, the EQS 580 has more than enough grunt to get the job done. In fact, we’d probably be fine with the less-powerful EQS 450 under most circumstances, which makes 329 horsepower and offers roughly the same amount of range. But it’s hard to complain about an overabundance of power, and the EQS 580 responds instantly when you drop the hammer. Thanks to the deep well of torque on tap and the all-wheel drive grip, passing slower traffic is truly effortless under almost any circumstance.

While we have a few nits to pick with the EQS 580, the truly important stuff—the powertrain, the range and charging capability, and the infotainment tech—make this car a compelling option in the luxury EV segment. Of course, with a starting price of $119,110 ($133,655 as tested, with the destination fee), it certainly should be. Perhaps more importantly, the EQS points the way toward a promising EV lineup for Mercedes-Benz that will see various elements of this tech shared amongst a range of vehicles—and at a variety of price points.