We drove the astonishing EQXX concept vehicle. Here's what it's like, and how it works. 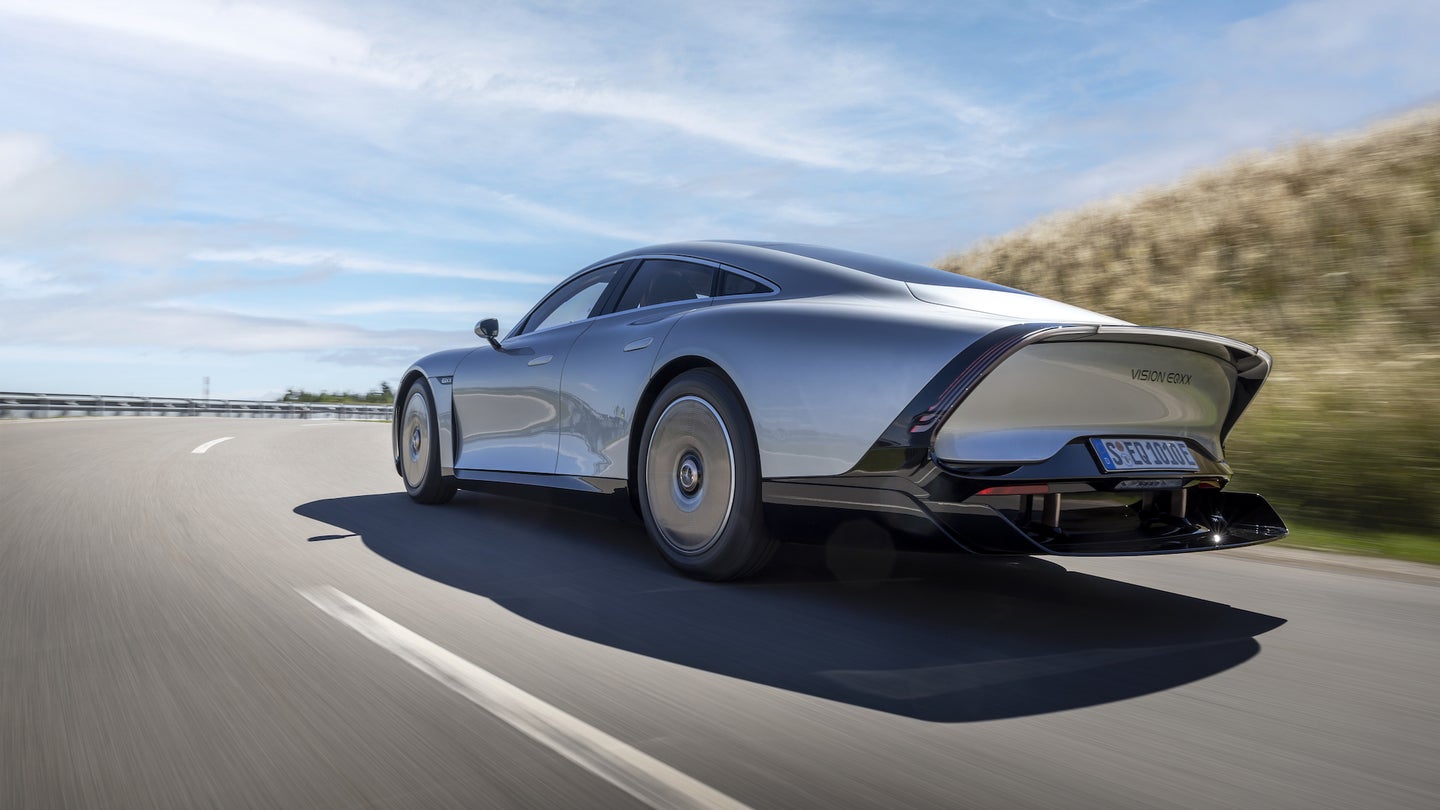 Setting improbably ambitious goals has a way of motivating people to achieve things that they might not have believed possible beforehand. Land on the moon and return safely to Earth by New Year’s Eve, 1969? Seemed impossible. But determined NASA employees and contractors made it happen.

The term “moonshot” is hopelessly overused, but this kind of daring assignment is exactly what happened when Mercedes-Benz executives decided that the company would build an electric concept car that is capable of traveling 1,000 kilometers (621 miles) of driving on public roads without recharging. Oh, and they’d have to design the car from scratch, build it, and prove its capability in an actual 1,000 km road drive in just 18 months. Crazy!

The result is the low-slung Vision EQXX. It stands only 53 inches tall, and its slippery design yields a wind-cheating coefficient of drag (CoD) of just 0.17. In the car industry, anything less than 0.30 is considered excellent. A football’s score ranges between 0.18 and 0.20. Mercedes’ own superb EQS production model achieves a CoD of 0.20.

I had the opportunity to slide behind the wheel of the EQXX, a bullet-shaped technical marvel concept car at the Mercedes Immendingen proving ground in southern Germany, and to my surprise, what I found is a polished machine that is seemingly ready for showrooms rather than the one-off technical breakthrough that the EQXX really is.

To achieve this seemingly impossible goal, Mercedes attacked efficiency at every opportunity in pursuit of the “virtuous circle” of benefits that result from minimized weight and drag that reduces the demands for a bigger, heavier battery pack and motor. However—and this is part of why the car looks like something that could go on sale next year—they consciously chose to skip a couple highly visible design elements for drag reduction.

[Related: Opulence and displays galore: Meet the EQS 580 EV and its ‘Hyperscreen’]

The company wanted anyone seeing the Vision EQXX to consider it a real car and not an experiment. So the aerodynamic team limited the car’s drag-reducing rearward taper to an invisible two inches, they eschewed the rear fender skirts that reduce the aerodynamic drag that results from the rear wheels churning turbulently through the air, and they mounted plain, old-fashioned glass mirrors on the doors instead of using cameras for side-view mirrors. The homely original 1999 Honda Insight hybrid-electric is the appearance they sought to avoid.

Then, even with one hand proverbially tied behind their backs, the engineers, aerodynamicists, and stylists still produced that world-beating 0.17 CoD number. One way they accomplished this was by substituting an underside cooling plate for the usual radiator. Air flows along the bottom side of this plate rather than through a radiator’s cooling fins, dramatically reducing drag. On-demand cooling means that the EQXX has air exhausts in the hood that can draw air from under the car’s front when needed in hot weather. Doing that adds only 0.007 to the car’s coefficient of drag.

And the car rolls on Bridgestone’s narrow, low-rolling-resistance Turanza Eco tires that provide the dual benefit of reduced aero drag and reduced friction. During the test drive, I experienced the benefit of these tires first-hand while cruising on a very slight downhill straight, when the car coasted from 57 kilometers per hour to 60 kph where a regular car would probably soon come to a stop rather than gaining speed.

As with most EVs, the EQXX has multiple settings for energy recovery. Normally, I like to drive in a mode that provides high regeneration when the driver lifts a foot off the accelerator pedal, but Julien Pillas, an electric drive special projects engineer who babysits my time in the company’s very expensive project car, coaches me that I can improve the efficiency of my drive by selecting the “coast” mode at some points in the drive.

This lets the car exploit its slipperiness, and takes advantage of the fact that there are no conversion losses by directly using gravity to power the car when going down hills, rather than turning that energy into electricity stored in the battery and then deploying that juice back to the electric motor later.

The EQXX is fully instrumented and Mercedes produces a data chart of my drive. They’re impressed that during my 20 minutes behind the wheel, the car consumed energy at a rate of 7.78 kilowatt-hours per 100 kilometers of driving, which bested the 7.9-kWh benchmark set by their driver on the same route. To be fair, I did average a slightly slower speed during my drive, but my trip also included a full-throttle 0-60 mph acceleration blast up a steep hill to gain a seat-of-the-pants impression of the EQXX’s entirely acceptable acceleration.

Unlike immensely powerful and quick vehicles like the 1,000-horsepower Hummer EV, the EQXX’s single electric motor powering its rear wheels is rated at a modest 241 horsepower. However, that motor is only tasked with moving a similarly modest (for an EV) curb weight of 3,858 lbs. The EQXX employs exotic carbon fiber construction and has so-called bionic castings whose optimized shape mimics biological structures, but a big source of the car’s weight control comes from its battery pack, which is a relatively lithe 1,091 lbs.

For a 100-kilowatt-hour pack, that’s an amazing accomplishment. Mercedes achieves this using a 920-volt battery pack with silicon carbide power electronics to produce a battery that is half the physical size of the battery in the Mercedes EQS production model, and that occupies 30 percent less space than its production counterpart.

The pack is the work of Mercedes-AMG High Performance Powertrains (HPP) in Brixworth, England. These are the wizards who helped the Mercedes Formula 1 team win the last eight constructor’s championships with their hybrid-electric drivetrain mastery.

“One of the best ways to improve efficiency is to reduce losses,” explains Eva Greiner, chief engineer of the electric drive system at Mercedes-Benz, in the car’s press release. “We worked on every part of the system to reduce energy consumption and losses through system design, material selection, lubrication and heat management. And our fantastic simulation tools helped us find out quickly what works and what doesn’t.”

The car’s light weight and its narrow tires contribute to light steering effort. Underway, the electric power steering assistance diminishes and the steering feel is communicative and responsive. At parking lot speeds, the assistance is overboosted, leaving the steering feeling disconnected. In a production car, I’d hope for an over-the-air update to improve this. In a groundbreaking prototype that rushed to meet a deadline, this is the closest thing I can find to a complaint. Astounding.

Power application through the accelerator pedal is smooth and linear, and the regeneration when I lift off the pedal is driver-selectable. In any regeneration mode, the car delivers no surprises, with the refinement you’d expect of a Mercedes production car.

The EQXX’s doors open and close with authority. The cabin is spacious and well-detailed (though the seats’ foam is curiously hard). My impression of reliability is born out by the fact that the EQXX never broke down and stranded its test drivers, says Pillas.

The team tested the car’s drivetrain components in an EQB SUV prototype fitted with the experimental parts. This car did suffer failures, and even when it was working, the drivers suffered from a lack of climate control during many chilly European winter tests, Pillas recalls.

After this preparation, the team successfully completed its mission of driving the EQXX for 1,008 km (630 miles) in a drive from Sindelfingen, Germany, over the Alps, to Cassis, France. But the team wasn’t done. Feeling their car had still more potential, Mercedes engineers executed a shocking 1,202-km (747-mile) drive on a single charge, piloting the EQXX from the company headquarters in Stuttgart, Germany, to Silverstone, England. This trip benefited from more moderate temperatures and flatter terrain, averaging 52 mph and hitting a top speed of 87 mph on the autobahn.

Do you suppose that when the engineers set out to achieve the seemingly impossible goals set for their concept car, they imagined they’d produce a machine so road-ready that it could plausibly also be a preview for a showroom-ready version? My guess is that, as with the first record-setting drive of the EQXX, Mercedes is still not done with this car.