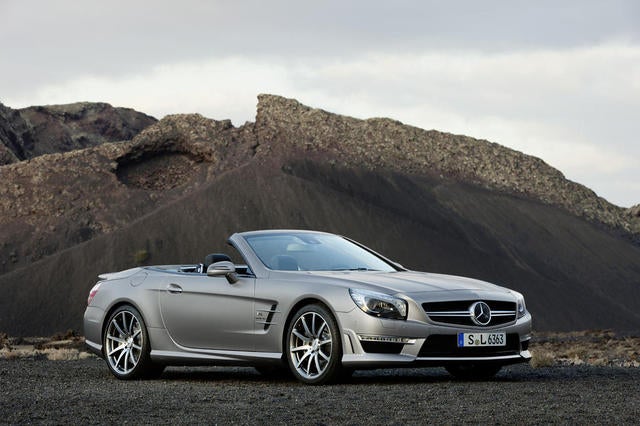 With the new sixth generation SL, Mercedes-Benz once again redefines the two-seater luxury roadster segment that it helped to create in 1954. For 2013, Mercedes-Benz started from the ground up on the SL, this time building upon a lightweight aluminum bodyshell similar to the top-of-the-range SLS. The platform is entirely new–its first in a decade.

The new SL is longer, wider, lighter, more powerful and gets better gas mileage than before. But the 2013 SL 63 AMG–AMG is Mercedes’s performance division–doesn’t stop there, with more power and a sportier drive. It’s a techno-luxury roadster worthy of its (considerable) pricetag.

Almost everything’s new. Starting with new for 2013 SL underpinnings, the AMG model ups the ante with a 5.5-liter, 530-hp, 590-lb-ft twin-turbocharged “bi-turbo” V8 engine mated to a seven-speed automatic gearbox that drives the power to the rear wheels.

The body is two inches longer and a little more than two inches wider than the previous model. With the new, larger size and interior redux, the SL AMG looks right at home in the 21st century, especially when painted in an a la mode matte finish. Our test model was a fetching matte Designo magno cashmere white with matte black rims that looked especially of the moment.

The engineering team says that about a third of the SL 63 AMG is different from the SL 550. Those changes include the drivetrain, the cooling system, the steering ratio, the fuel system and the grill, among other parts, which result in a much more dynamic drive than the 550. That said, even with all the new upgrades to the vehicle, the new SL is about 275 pounds lighter than the last iteration.

Since almost everything is new, almost everything is improved over the outgoing model. We especially like the new larger body, which creates a much more muscular-feeling SL, differentiating the SL from the decidedly more up-market SLK-Class. We liked the optional, $6,400 Bang & Olufsen BeoSound audio system as well as the optional $2,500 Magic Sky Control roof, which, like a pair of Foster Grant sunglasses, can go from light to dark, all at a switch of a button.

The Drive: The SL 63 AMG is like a private jet for two, all sumptuous leather, carbon fiber and a cockpit designed for the driver. The drive isn’t half bad, either. The SL was everything you’d expect a high-end roadster to be: quiet and unassuming when it needed to be, but if you drop the hammer, switch the car to Sport+ mode, you get an encouragingly loud gurgle from the exhaust and speeding-ticket-inducing power. The SL has a lot of horsepower in its standard configuration, but we think the $9,000 AMG performance package is a must-have option.

With a boost to the turbo from 14.2 psi to 18.5 psi, the performance pack gives the SL a power enhancement to 557 hp and 664-lb-ft of torque and adds a much needed limited slip differential. The performance-pack-equipped SL also gains a top speed of 186 mph, up from a tortoise-like 155mph. The additional power cuts almost 0.2 seconds off the 0-to-60-time, to 4 as opposed to 4.2 seconds. Did we mention there are also red brake calipers? Well, there are also red brake calipers.

With or without the performance pack, the SL 63 AMG comes with an Eco Stop/Start feature that turns off the engine at stoplights and restarts when you lift off the brake, just like a Prius. If the eco mode isn’t to your liking, just switch the control to S or S+ to disable the function. But who can argue with 30% better gas mileage?

How You’ll Look While Driving It: You will look awesome. 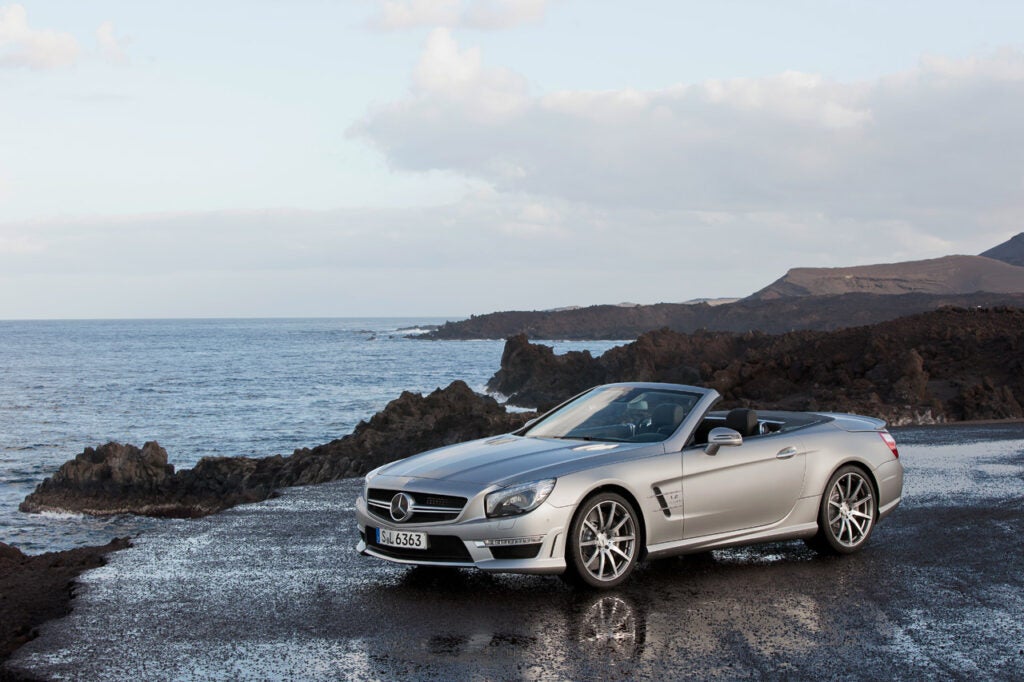 We wish a lot of the options came standard. Really, when dropping close to $150,000 for a car, we think it should come with a backup camera and keyless entry system standard. We also think the COMAND control system for the SL is sometimes a bit too confusing in terms of drill-down menus–it took almost four steps to adjust the bolsters on the seats. That said, you know when the main gripe about a car is the bolster on the seats, the manufacture has done something right.

The SL, while a two-seat roadster, goes head to head with a variety of models–the Jaguar XKR-S, Porsche 911 Cabriolet, Maserati GranTurismo Sport, Bentley Continental GTC and the Aston Martin Vantage, which is an awfully nice group to be in.

Yep, it’s an all-new SL AMG roadster and yep, Mercedes-Benz will sell a bushel of them. Why? The SL buyer is unique–a lot like a Porsche 911 buyer–and the Tri-Star has built a lot of goodwill into the vehicle. Every few years, SL owners replace their older model with a newer one even if the model isn’t substantially different–that’s what Steve Jobs did with his SL. This time there is no reason not to upgrade to the newest and best SL yet.