Behind the looking glass of the world’s biggest telescope

It will take University of Arizona scientists a year to polish each 18-ton mirror. They plan to finish by 2028. 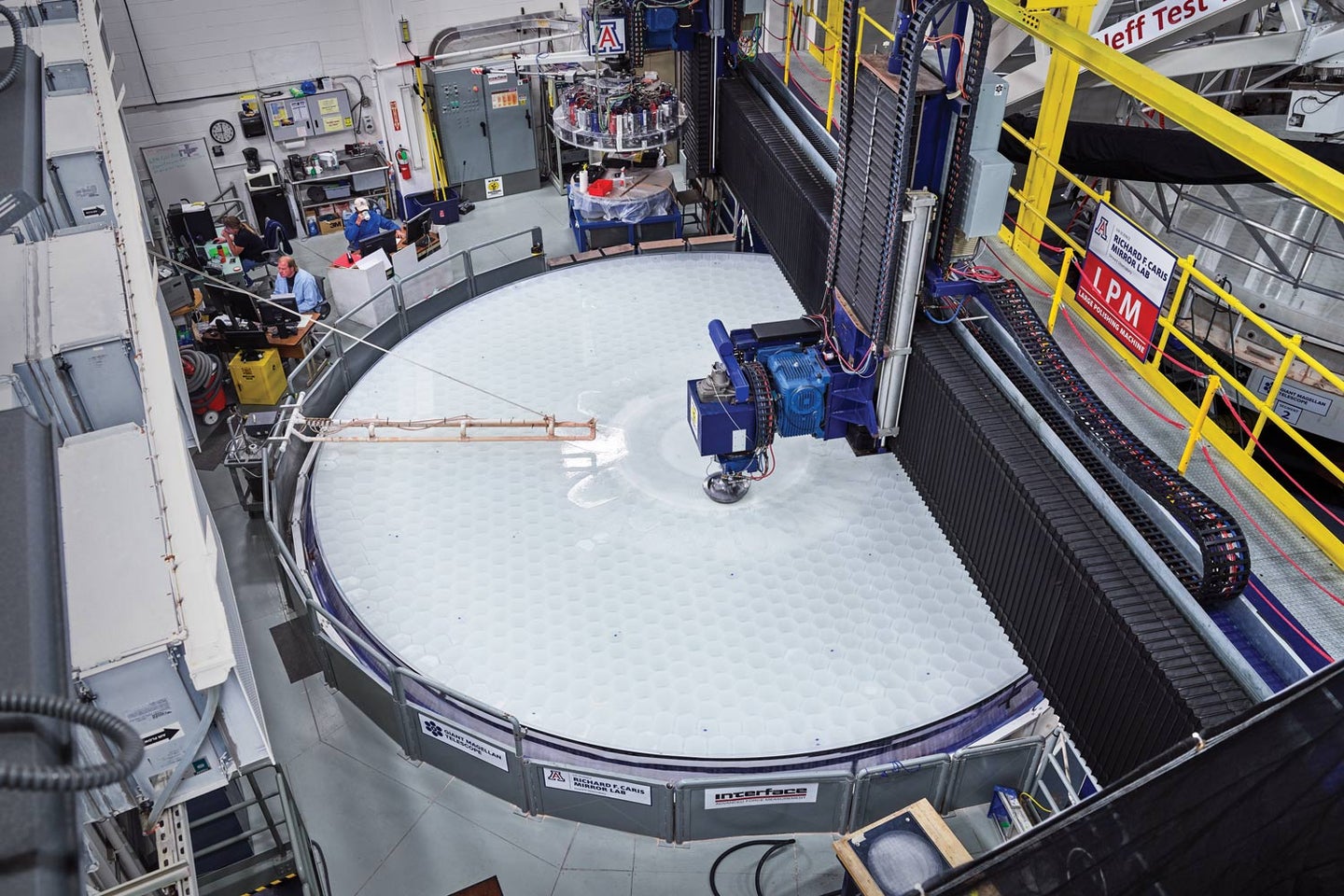 Astronomers who peer through the Giant Magellan Telescope might one day photograph exoplanets, or look back through time to see our universe in its youth. Gazing farther into space than ever before requires building the largest reflector yet, one far too big to send into orbit. The instrument slowly rising on a Chilean mountaintop will contain seven mirrors, each 27.6 feet across and ­arrayed like a daisy. They’re being cast at the Richard F. ­Caris Mirror Laboratory at the University of Arizona, and each requires 18 tons of glass and more than a year of polishing to attain its spoonlike shape. When the last of them is installed (the goal is 2028), scientists will view the cosmos with 10 times the resolution of the Hubble Space Telescope.

Each mirror starts with 10,000 slabs of borosilicate glass—18 tons in all. The stuff is akin to the Pyrex that holds your leftovers. The team cleans and inspects every fist-size block for flaws before inserting each one into a honeycomb-­patterned mold. Placing the pieces to ensure they melt into shape evenly takes a day. The finished motif creates a kaleidoscope of color as the lab’s light reflects off it. “It’s just so awesome,” says mechanical engineer Jeff Kingsley, who oversees mirror manufacturing. “I always make sure I am there to see it.”

Melting all that glass to the con­sistency of cold honey takes six to 10 hours, but preheating the furnace to 2,129 degrees Fahrenheit takes about a week. It also requires enough electricity to power 1,500 homes. The two-story machine is the diameter of a fairground carousel and spins a bit faster than one to give the mirrors their concave shape. (That curvature is refined during polishing.) The giant machine continues turning for more than three months as the glass anneals. So far, the lab has cast five mirrors for the new scope.

Once the glass cools, the team lifts the slab from the furnace ­using a temporary fixture they ­secure to the surface with ­super-​sticky adhesive. The disc, which is 27.5 inches thick, gets a good scrubbing top and bottom. Then technicians flip the unwieldy mass upside down to install 157 brackets called load spreaders that distribute the mirror’s weight as evenly as possible. That hardware, which the crew is preparing to ­install here (above), affixes the finished product to its designated spot within the telescope.

Although the surface of the mirror is smooth, the underside features a honeycomb pattern of 1,681 hexagonal spaces, seen here (opposite) through the top of the reflector. This results in a stiffer piece of glass that is 80 percent lighter than a comparable solid chunk. More important, the ­design sheds heat much faster come nightfall, minimizing thermal distortion. Imagine hot air shimmering above a road, except it’s coming off your billion-dollar telescope, ­obscuring your view. The resulting images will be sharper and clearer come showtime.

The finished glass doesn’t really sparkle until team members apply a whisper-thin coating of reflective aluminum at the telescope site at Las Campanas Observatory in Chile. That final step happens on location to avoid damaging the surface in transit. Before the structure leaves the lab, though, every­one takes a moment to celebrate the completion of yet another key component. Then it’s on to the next mirror. “You’ve still got plenty of work to do,” optical engineer Buddy Martin says. Five cast, only two to go.

Arizona
fall 2019
Hubble
life from above
out there