The biggest automotive innovations of 2022

An EV that can go 747 miles on a charge, a thrilling new Corolla, and more automotive innovations are the Best of What's New. 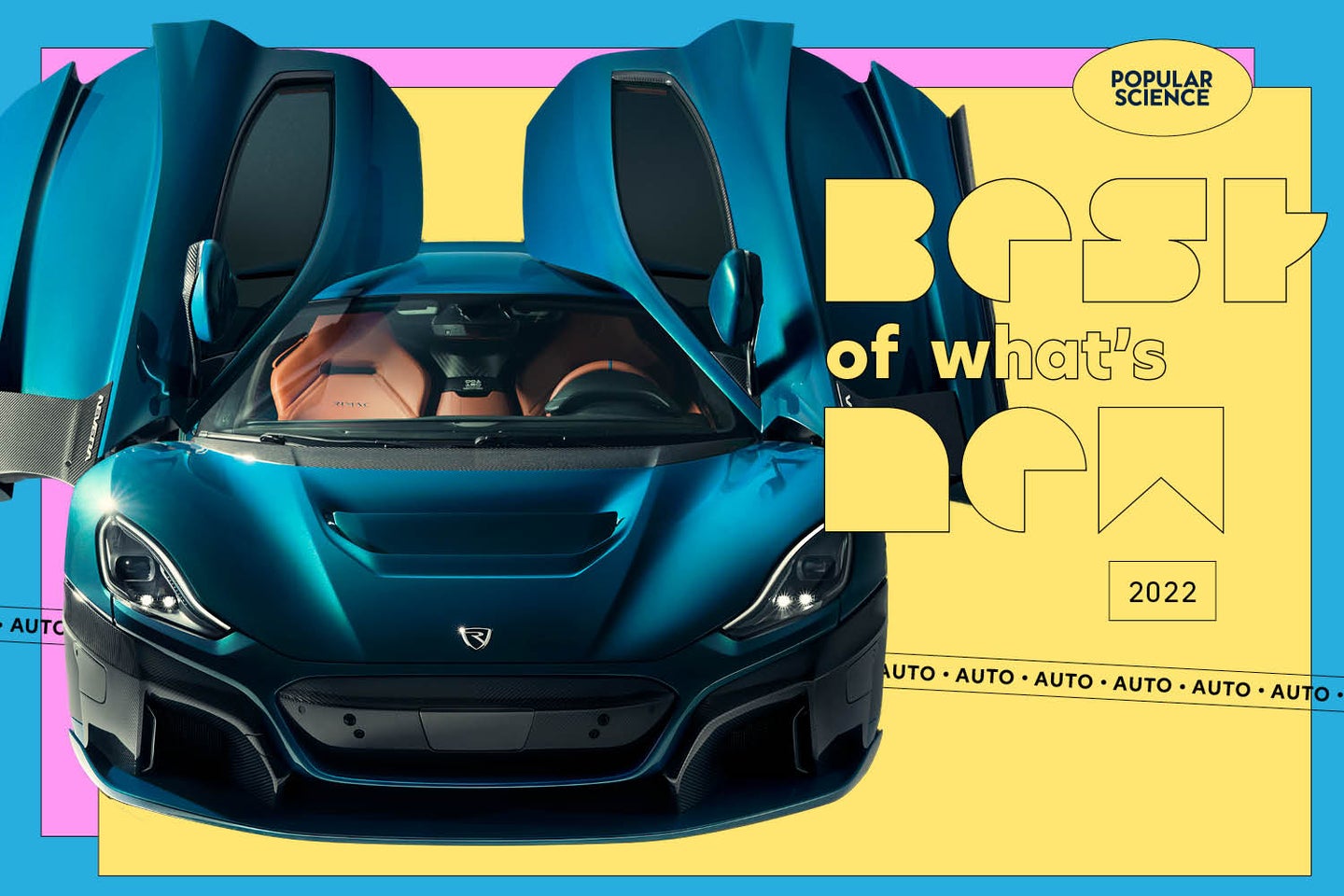 We may be decades away from replacing fossil-fuel-powered vehicles with a fully electric fleet, but at the same time, EVs have continued their impressive gains on US roadways. But the most innovative companies in the automotive industry are looking beyond just batteries and charging infrastructure. They’re making the most of what we’ve got while doing the heavy lifting that goes unnoticed: Making vehicles lighter, more aerodynamic, more useful, and less wasteful. They’re also giving us faster and extremely entertaining cars—and we’re here to honor their technical brilliance.

This year, Mercedes-Benz introduced a one-off, world-beating car with an altruistic purpose: To make the most out of the heavy batteries at the core of the growing EV fleet. The numbers for the Vision EQXX are otherworldly for an EV: 3,900 pounds of car and 747 miles on a single charge. It’s slow by EV and gasoline standards, yet modesty was the mission. So how did they do it? Here’s one trick: Its body can extend its sweptback tail at speed another eight inches, helping cut drag by half that of a normal sedan or crossover. To further augment efficiency, Mercedes-Benz opted for a Formula 1 subframe, magnesium wheels, tiny side-view mirrors, and a 100-kWh battery that the company claims is half the size and almost a third lighter than the powerpack in their production EQS sedan. Reducing mass and improving efficiency are old mechanical concepts that all manufacturers need to revisit if EVs are to succeed in the gasoline era. For that to happen, however, the breakthroughs must be this dramatic. Though it’s only a concept, the Vision EQXX may be the spark that ignites that reality.

Uconnect 5 by Jeep: Putting the passenger in command

Large SUVs typically allow the people in the back to zone out and watch whatever’s on the screens in front of them. But in the Jeep Grand Wagoneer, all the fun is in the shotgun seat—and won’t distract the driver. The Uconnect 5 infotainment system can run up to eight independent displays, including a 10.3-inch touchscreen built into the passenger-side dash. To reduce distraction, Jeep tints the display so it’s a faint glow to the driver while still looking bright to the passenger. You can connect an Xbox to the HDMI port, stream a ton of titles with the built-in Amazon Fire TV, control the 360 cameras, and set the navigation system by sending a chosen route to three of the driver displays. Best of all, there’s no ugly screen-mounting hardware to clutter the polished black dash.

Electric vehicles—performance models especially—put the strain of extra mass and torque onto their tires. The Pilot Sport EV is the first of a growing segment of EV-specific treads designed to improve both range and grip. Typically, a manufacturer can increase range by reducing the rolling resistance—the slowing effects of friction—at the expense of grip. These Michelins find balance by putting different parts of the tire in charge of handling torque and mass: The center of the tire has a grippier compound to take the brunt of an EV’s torque, while the shoulders are optimized for lower rolling resistance. It’s a mix they honed over the last eight years on Formula E racers. Compared to the company’s gold standard, the Pilot Sport 4S, the Pilot Sport EV increases range by as much as 20 percent with nearly the same level of traction.

Android Automotive OS  by Google: A car OS from an OS company

Google’s suite of car-specific software has been mediocre for the past several years. Android Auto projects a limited array of Android apps onto a car’s infotainment display; then there’s regular old Android, which is tablet software that many automakers modify for their vehicles. In either instance, their interfaces feel half-baked. Enter Android Automotive OS, which is Google’s first operating system developed specifically and only for cars. Through it, the voice assistant, maps, keyboards, and the Play store run faster and function more intuitively than a smartphone connected to Android Auto or Apple CarPlay ever could. Thanks to it, the experience on the latest Volvo, Polestar, and Chevrolet vehicles is dramatically better than anything those automakers had ever coded themselves.

In 2022, it’s rare to see automakers develop all-new gasoline engines. To see Toyota craft an engine with as much output per liter as a Bugatti Chiron? That’s a cosmic event. The G16E-GTS spews 300 turbocharged ponies from three tiny cylinders displacing only 1.6 liters. This is the ferocious heart of the 2023 GR Corolla, an ordinary-looking hatchback. On the Morizo Edition, the turbocharger pumps 26.3 PSI of air through the intake—a monstrous amount that the fortified engine block can handle. First offered overseas in the smaller GR Yaris, this engine transforms the humdrum Corolla—the world’s best-selling car of all time—into an everyday sports car. It’s comfortable, practical, gets 28 mpg on the highway, and will absolutely embarrass a Porsche on a twisty road.

FC1-X by Nitro: Rally racing at its most extreme

The FC1-X is what happens when motorcycle stuntman and record-breaking rally driver Travis Pastrana and a Swedish race team agree that Red Bull’s Rallycross is too slow. The FC1-X is a custom, 1000-horsepower electric car that zaps to 60 mph in 1.5 seconds and can land a 100-foot jump. A major reason: The car’s silicon carbide inverter is a fraction of the size and weight of a typical EV’s inverter—the device that converts the battery’s DC output to AC for the motors—and the battery can handle major power draws without overheating. It’s unique to Pastrana’s Nitro Rallycross series. As it evolves, FC1-X stands to influence the next generation of EVs—for both the track and the road.

General Motors’ Super Cruise strikes an ideal balance between hands-free driving assistance—giving the human operator a break—and safety. Using a network of laser-scanned highways at 10 times the accuracy of a GPS map with a full suite of ultrasonic, radar, and infrared cameras, Super Cruise can operate on more than 400,000 miles of marked US highways, including executing automatic lane changes. Most important, however, is when it won’t operate: Super Cruise will disable the system for the entire drive if the driver looks away for too long, a road is unmapped, the vehicle’s data connection goes dark, or any number of failure points to keep the person behind the wheel engaged. Next up is Ultra Cruise, which promises “door-to-door” hands-free driving, but that may be years away.

Let’s get this out of the way. From the standpoint of energy consumption, the GMC Hummer EV is wasteful—and, at nearly 10,000 pounds, it’s a behemoth. Its battery pack is twice the capacity of the best Tesla Model S but delivers 80 percent of the EPA-estimated range compared to that vehicle. But underneath this super truck’s extravagance is a mind-blowing method of four-wheel steering. CrabWalk sounds too ridiculous and motion sickness-inducing to be true, but it is: All four wheels can steer the truck diagonally. The rear rims steer in tandem with the front at up to 10 degrees, enough to let this massive vehicle dance sideways like a crustacean that needs to parallel park, moving up to 25 mph.

Nevera by Rimac: The most powerful production car

A Croatian scientist who converted his broken BMW to run on electricity is now, at age 34, the CEO of a hypercar company that’s fresh off a merger with Bugatti. Mate Rimac’s dream machine, the 1877-horsepower Nevera, has four electric motors and the stiffest carbon fiber monocoque—that’s a combination of the car’s frame and body—around. It’s the world’s fastest EV: 258 mph. Car enthusiasts with $2.4 million to blow will soon show us the evidence. But more importantly, Rimac’s other partners, which include Hyundai and Porsche, will benefit from the company’s EV expertise in future cars costing a fraction of that price.

The heavy batteries that can be packaged easily in a car are harder to incorporate into a motorcycle that needs to balance. Instead of allowing a bulky, off-the-shelf battery pack to dictate the bike’s design, Ducati designed the battery on its MotoE—which the entire field of the 2023 FIM MotoE World Cup will ride—so that it functions as an integral part of the bike’s central frame instead of a bulky add-on. Two separate cooling systems (one for the 18-kWh battery, the other for the 150-hp motor and inverter) ensure the MotoE can sustain 171 mph and then pit for a recharge without needing to cool down. It might not be the first electric racing bike, but it is the first such bike that customers will ultimately want to ride on the road.