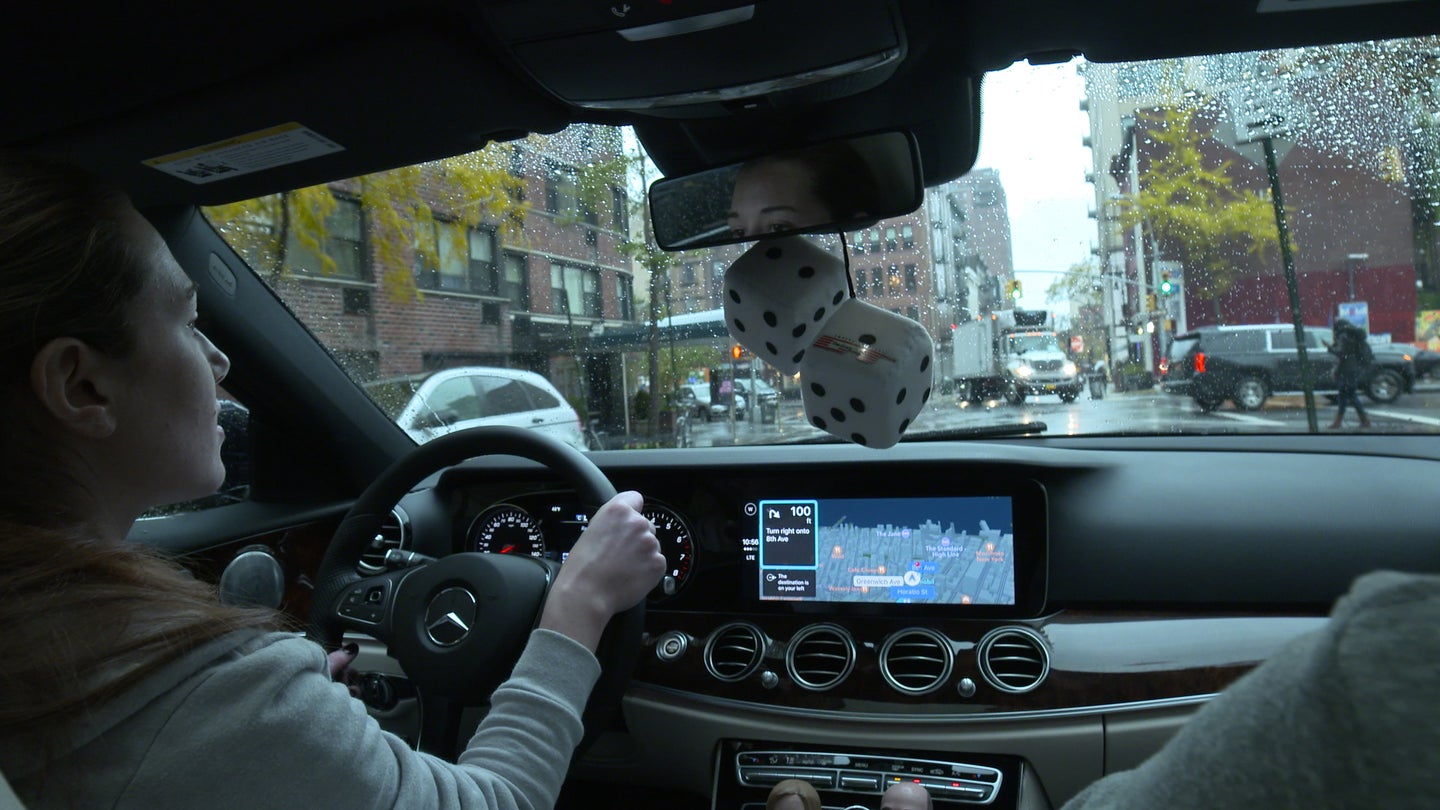 In-car infotainment systems—the interfaces that tell you the name of the song on the radio or insist you make a U-Turn—are inadequate. They’re often too complicated to operate while driving and, worse, out-of-date by the time the car actually finds a home in your garage.

In recent years, though, a handful of car companies have caved, letting third-party apps integrate with (or instead of) the car’s standard interface.

Today’s top contenders are Apple’s CarPlay and Android Auto. Each is a stripped-down version of your phone’s system that runs on your car’s computer interface. They allow drivers and passengers to control music, navigate, and communicate by way of voice commands and the car’s manual controls.

In theory, better apps mean safer driving; if you don’t need to access your phone, you can better focus on driving. But how do the systems stack up when you actually hit the road? Popular Science tested Apple CarPlay and Android Auto in matching 2017 Mercedes Benz E-Class sedans as part of Amazon’s Grand Tour Navigation Challenge. Here’s what we learned.

Getting CarPlay configured is pretty straightforward: You plug in your iPhone and CarPlay automatically appears on the screen.

It looks exactly like the iOS interface on your phone, but with only a core group of apps available: Phone, Music, Maps, Messages, Now Playing, Podcasts, and Audio. These apps can’t be removed, though a select few, like Spotify, can be added.

While it takes over the entire screen, CarPlay is far from a replacement for your car’s infotainment system, and you can easily exit CarPlay and go back to the car’s standard system when needed.

There are limitations, though. The system requires a lightening bolt plug-in so CarPlay only works with iPhone 5 and up. What’s more, Carplay doesn’t work in every car. Apple lists compatible vehicles on its website, but if yours isn’t there, don’t give up just yet. Just about any car can be made compatible. However, that means getting rid of your car’s current system and replacing it with another one. These systems come with a hefty price tag; one of the cheapest will set you back $399.

The setup for Android Auto is supposed to work the same way: Download the app onto your phone, plug it into a compatible car’s USB port (the list of vehicles is available on the app’s website), and the program should load automatically. I found it easy enough to download the app and follow the prompts to grant it access to my location, calls, and texts. Then I plopped into the passenger seat of a 2017 Mercedes E-Class, plugged in my phone, and…nothing. I tried opening the app manually, but that still didn’t work.

This problem might be unique to the Mercedes operating system. But because of it, we had to dig through the car’s confusing menu system, and explore a few dead ends, before finding the screen that would give Android Auto access to the vehicle. The app’s website did not warn us about this process, or provide any help working through it. But after the initial snafu, Android Auto launched automatically every time I plugged in my phone.

On the bright side, this experience gave me a taste of just how annoying it is to use the car’s built-in infotainment system. Once the Android interface opened, it was much simpler and more intuitive to use. The home screen displays a list of “cards” with notifications and information about the weather and navigation. Users can also move between screens for maps, music, and calls, or texts.

While the CarPlay system may look exactly like your phone, using it is much different. Because the system is intended to be used while driving, it’s almost entirely voice-driven via Siri. Users can activate Siri in a few ways: by pressing the voice prompt buttons on the steering wheel, on the touchscreen dashboard, or by saying “Hey, Siri.”

Unfortunately, Siri doesn’t always understand what you are trying to say, and if it’s a particularly obscure place or one whose name is challenging to pronounce, using voice control exclusively will pose a significant challenge.

To use the voice system, the driver must hold down the microphone button on the steering wheel, or either rider can use the car’s manual controls to toggle over to a microphone button on the screen itself. Once it was activated, Google was surprisingly good at guessing what we were trying to say, whether that was sending texts, placing a call, or adding a new destination to the drive.

That said, using voice commands felt a little uncertain—I was never sure how well they would work. When we placed a call to a restaurant, but realized that it was for the wrong location, I didn’t trust the system to hang up if I said “hang up.” So I used the manual controls instead.

Carplay will do everything in its power to force you to use the apps hands-free. So while CarPlay doesn’t lock you out of your iPhone, if you do happen to tap the Messages app on your phone, Siri will automatically kick in. Manually controlling CarPlay using the dashboard is fairly straightforward and intuitive. Once you are inside each app, you can easily click through to get to where you want to go. In this way, it’s hard to get lost within the system. 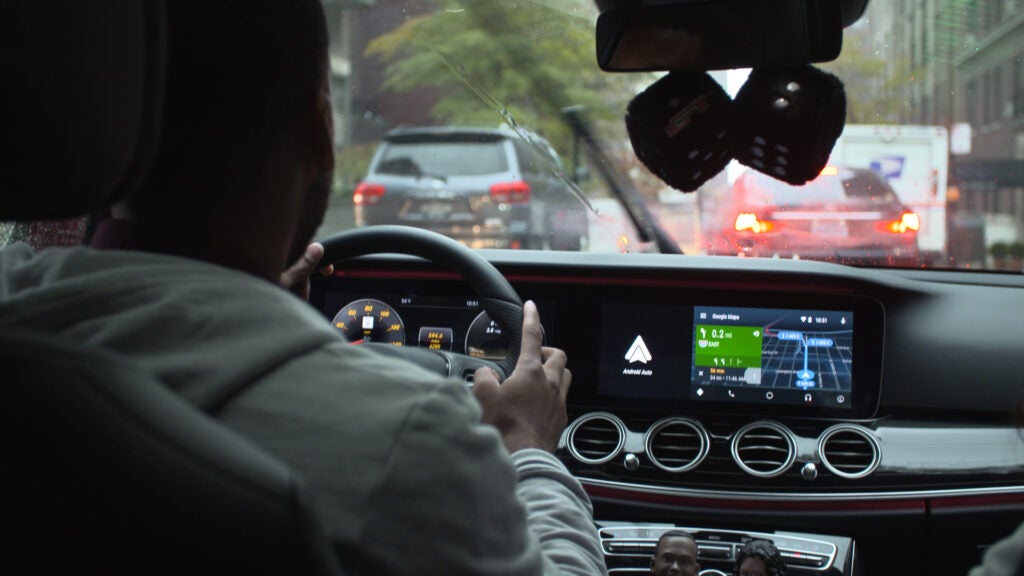 I liked using the car’s dashboard to navigate through the straightforward Android Auto system—it was simple and made me feel more in control than voice commands did. Because I was the passenger, I could use the manual controls without worrying about keeping my eyes on the road. But for a driver alone in a car, this is probably not a safe option.

This was not the only conflict between the driver’s and the passenger’s best interests. Like CarPlay, Android Auto tries to prevent you from using your phone when it’s plugged into the car’s system. This is good for drivers with an itchy Twitter finger: Every time they press the phone’s home button, they get a screen with the Android Auto logo and nothing else. But for the passenger, this is really annoying—what if I get bored with the landscape and want to check a non-essential app like Facebook? Luckily (or unluckily), it’s pretty easy to bypass this failsafe: Just skip the home screen and open an app by hitting a notification or flipping through your recently-opened apps.

To call or text someone, you can either use Siri or tap the Phone button on the dashboard. Apple tries to make calling or texting with CarPlay as hands-free as possible, so as soon as you tap either the Phone or Messages button on the dashboard, it activates the voice control system. Texting is mostly done with voice-to-text software, which works both if you want to compose a text or hear one.

You can access calls and texts manually or via voice commands. Manual controls let you go back and re-check past messages, but voice commands are better for actually placing calls and dictating texts. Google’s not the most expressive reader, but it renders text messages clearly and translates voice into text accurately.

Because CarPlay has a fixed interface, when it’s in use, the only navigational system you have access to is Apple’s Maps. You can access it, and direct where you want to go, by using voice command or by hitting the dashboard button. If Siri doesn’t understand you or can’t figure out where you want to go (which happens often enough), you can manually type in the address or restaurant name by using the finder button.

The navigation system in Android Auto is the same as the excellent Google Maps one. It’s easy to look for gas stations nearby and add detours along the route, which can be accomplished via voice or manual commands. The biggest problem we faced was when we were trying to decide which of the three locations of a restaurant we should visit. It was a little tricky to say which one we wanted to add to the route, so I ended up selecting the correct location with the manual controls instead of voice.

Listening to music or other types of audio is somewhat limited to the apps available on the preset interface; these include Apple’s Music, Podcasts, and Audiobooks. However, what makes CarPlay particularly enticing is that it allows you to install a select list of other apps that aren’t on that preset list. On its website, Apple lists all the ones that are available to add, but a few popular ones include Spotify, Stitcher, At Bat, and Slacker Radio. Play on!

I didn’t realize that Android Auto would let me use third-party music apps until we were already on the road. In addition to the Google Play Music system, you can listen to Spotify, Pandora, Stitcher, and Audible, among others. The music automatically dips in volume when the navigation system issues an audio prompt, so it won’t distract drivers from the directions.