It'll be screens and 3D images as far as the eye can see. 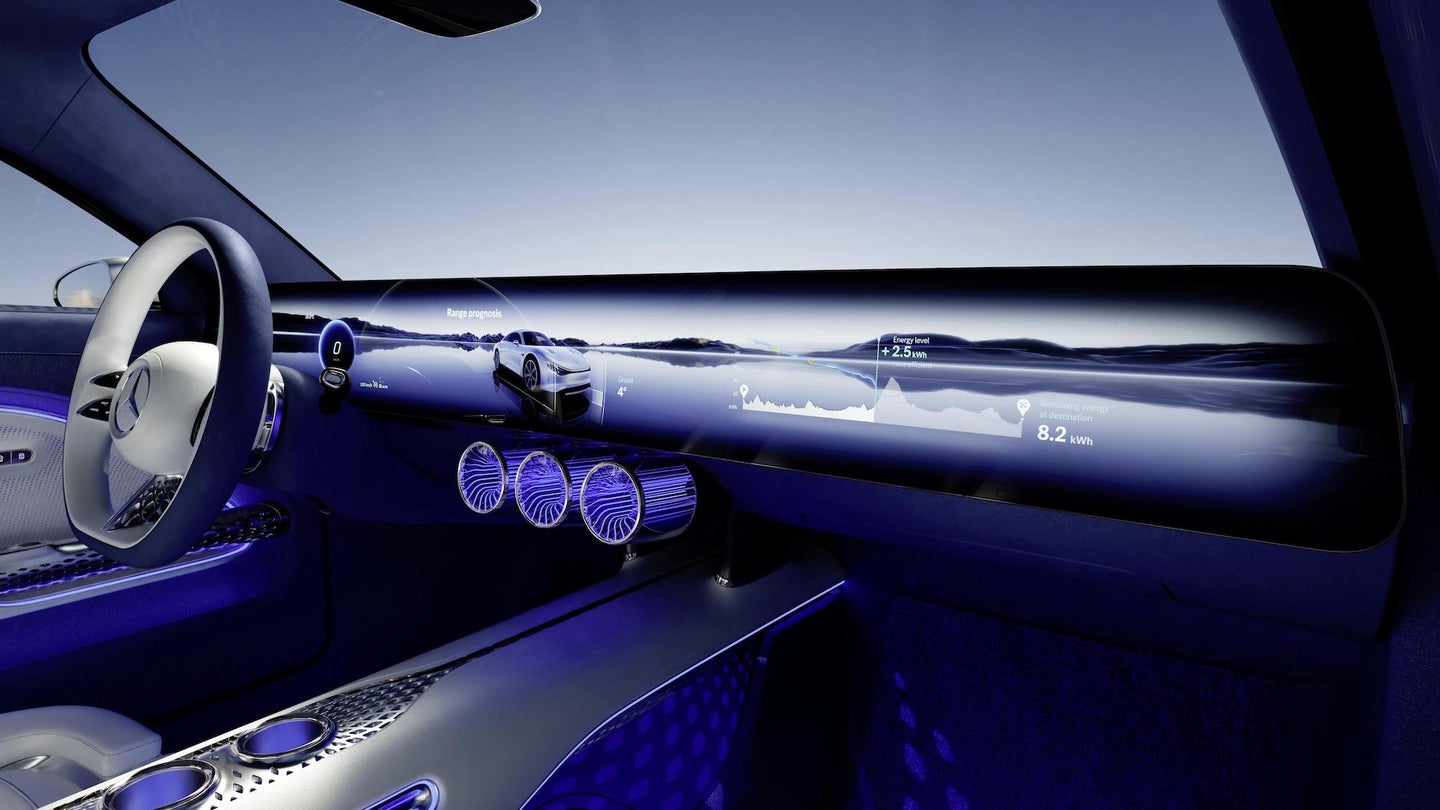 Unity Technologies, a developer of video game software, revealed this week that it will be providing the technology backbone for Mercedes-Benz’ next-generation infotainment system. The newest headline on the company’s blog repeated what Mercedes-Benz Group AG Chief Design Officer Gorden Wagener said in 2019: “Screens are the new horsepower.” Considering that screen size inside vehicles has been growing hugely in the past few years, some exploding past most iPad dimensions, he may be right.

For Mercedes-Benz, California-based Unity Technologies will underpin the automaker’s newest operating system, MB.OS, which will launch with 2024 models. The new OS will connect the powertrain (along with current semi-autonomous driving) with the infotainment and body and comfort systems in ways it hasn’t before, turning its cars even more into computers on wheels. Ultimately, the intent is for the car to become more tuned in to its capabilities as well as the driver’s and passengers’ desires.

“With our own operating system, we want to achieve three key things: to shape the user interface according to a luxury brand, to create a bidirectional communication with the customer and to integrate the digital lifestyle of the customer into the vehicle domain,” Magnus Östberg, chief software officer for Mercedes-Benz, told Automotive News.

Unity offers a development platform with some serious street cred. Gamers recognize the name for its licensed game engine, and Unity claims nearly half of the world’s games are built on Unity technology. On top of that, it says that 72 percent of the top 1,000 games were created with its platform. With heavy emphasis on 3D modeling, the technology company is working with the automaker on 3D navigation enhancements and digital avatar assistants for the future. Unity says its development enables Mercedes-Benz to create “visually compelling” and “highly interactive” graphics, incorporating all of the passengers in the cabin.

“Unity wants to be the 3D operating system of the world,” says Sylvio Drouin, VP of the Unity Labs R&D team, according to TechCrunch. Drouin isn’t speaking theoretically: Unity works on 30 platforms, including Windows, iOS, Android, Linux, Oculus Rift, Playstation 4, and Nintendo Switch. Competing head-to-head with Epic’s Unreal Engine (the brains behind Fortnite along with scores of games for PS4 and Xbox One), Unity is a legitimate powerhouse and Mercedes-Benz anticipates reaping the benefits of Unity’s experience.

Mercedes-Benz says it will be fully electric by 2030, including its high-performance AMG subdivision and uber-luxury Maybach brand. The automaker started with its EQS sedan in three flavors—EQS 450+, EQS 580 4Matic, and AMG EQS—and it’s ramping up as quickly as possible considering the constraints of supply chain challenges and chip shortages.

The Hyperscreen is the centerpiece showpiece of the EQS cabin. Behind a single soaring piece of glass, this eye feast includes a 12.3-inch digital gauge cluster for the driver, a 17.7-inch OLED center infotainment display, and a 12.3-inch touchscreen for the front passenger. The OLED screen is particularly impressive, its pixels emitting their own light source instead of other tech that requires a backlight. As a result, the graphics are video-game crisp.

If the name Unity sounds familiar in the automotive realm, it may be because BMW is using a Unity platform to pressure-test cars with Level 3-enabled automation. (On the scale of automotive autonomy, Level 3 means the driver must be ready and able when the system alerts the driver to regain control of the vehicle.) Currently, cars equipped with Level 3 autonomy are not legal on US roads, so BMW harnesses Unity’s development expertise to simulate driving conditions in three dimensions.

It’s a smart move for Mercedes-Benz, which is looking to expand its digital footprint and appeal to a younger audience. Experimental vehicles like the all-electric Vision EQXX concept vehicle have the potential to turn heads and show that the German brand is making an attempt to stay ahead. In fact, it was the Vision EQXX prototype that launched the Unity and Mercedes-Benz collaboration five years ago. The combination of zoomy powertrains and high-tech usability gives the brand a fighting chance to get ahead in the next decade.