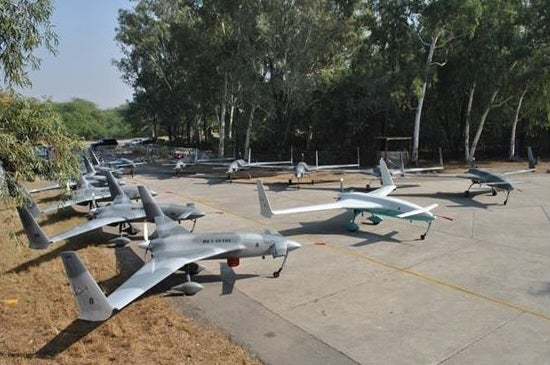 Drone war is almost synonymous with Pakistan, where for years American drones fought back Taliban and al Qaeda operations across the border from Afghanistan. It’s a tremendously contentious policy, with American planes dropping bombs on insurgents within Pakistan’s Federally Administered Tribal Areas (and, often, killing civilians in the process). What happens to the drone war when American forces leave Afghanistan? Turns out Pakistan may use its own drone to battle insurgents. After years of development, Pakistan is putting the finishing touches on the Burraq, an indigenously made armed drone that successfully test-fired a laser-guided missile earlier today.

The Burraq bears a strong resemblance to China’s CH-3 drone, with forward canards, a pusher propeller, and long, back-sloping wings. Today’s announcement, from the Twitter account of Pakistan’s military spokesman Asim Bajwal, notes that the Burraq fired successful on both still and moving targets, that the new drone can operate in all weather, and with pinpoint accuracy.

Before building their own drones, Pakistan tried to acquire some from the United States, but those requests were refused. The United States recently relaxed restrictions to allow for the export of armed drones, but it’s unclear whether America would be willing to sell any to Pakistan in the future.

Why would Pakistan want armed drones of its own? Drones like the Burraq are counter-insurgency weapons, which combine long flight times, surveillance video, and guided missiles to watch for and attack people believed to be part of violent groups. Pakistan’s Federally Administered Tribal Areas (FATA) sit on the border with Afghanistan, and following the U.S.-led invasion of Afghanistan in 2001, FATA became an operating base for the Taliban. In 2009, following a push by the Taliban into other cities in Pakistan, the Pakistanis launched a ground campaign to drive the Taliban back. Thousands of refugees fled the area to avoid the violence. Drone strikes are an alternative to fighting insurgencies on that scale from the ground. And with the Burraq, Pakistan can now do drone strikes on their own, without the United States.