The latest concept is a much stronger prototype than a previous attempt at a Wrangler in EV form. These are its specs. 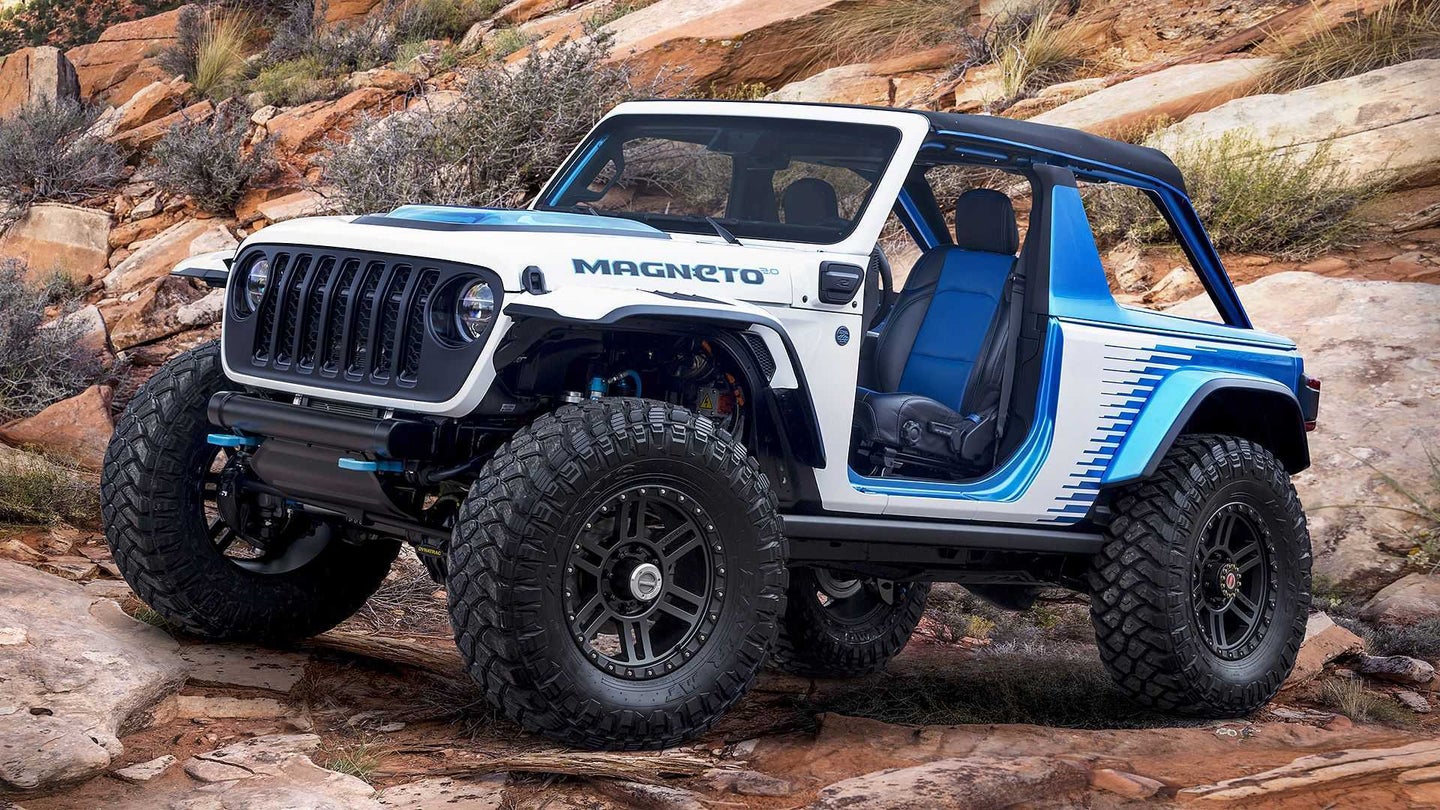 Every year thousands of Jeep enthusiasts gather in Moab, Utah for an event known as Easter Jeep Safari. The eight-day off-roading holiday in one of the world’s best rock-crawling locales has evolved over the years into an opportunity for Jeep to connect with its fans.

At the same time, for several years a cabal of engineers within the company have come together to develop a slew of concept vehicles that debut at the event. On occasion these teasers give potential customers a taste of what the company is cooking up for future product unveils, or at least items that may be made available as factory accessories in the future.

In 2021 the world was treated to the all-electric Jeep Wrangler Magneto concept. And this April 9, Jeep unveiled an updated Magneto 2.0 concept. The two concepts, along with Jeep parent company Stellantis’ EV Day last July, make it crystal clear that an all-electric version of the iconic Wrangler is in the cards in the near future.

Electric propulsion has some unique features that allow EVs to excel in off-road environments. An electric vehicle is much quieter than its gasoline or diesel-powered counterparts, allowing the EV off-road pilot to hear what the tires and suspension are doing. Electric motors also provide power delivery from the instant the driver’s foot contacts the accelerator pedal. Without having to work around drivetrain delays, an electric-motor-propelled Jeep would be better acclimated to climbing over rocks and ruts on the trail. And all of that is before you get to the environmental impact considerations of trail driving free of tailpipe emissions.

The 2021 Wrangler Magneto concept was a good first effort, but was immediately seen as a half-baked affair. With just 285 horsepower on tap, it offered poor performance for an electric vehicle. It also retained its factory manual transmission, transfer case, and locker axles, making it clear this was an ill-conceived concept, primitive in practice compared to modern EVs already on sale, and technologically overshadowed by production-ready electric off-roaders like Rivians R1T and GMC’s Hummer EV.

Crucially, if Jeep wants to be taken seriously with the launch of an electric off-roader, it would need to make Jeep fanatics believe the EV wasn’t just a replacement for, but an improvement over, the Wranglers they love. It would also need to make EV enthusiasts believe Jeep was the way forward. In order to do that, it would need to take some large steps beyond the original Magneto concept.

With its second attempt, the Magneto 2.0 Concept, unveiled at this year’s Easter Jeep Safari, it appears Jeep has done just that. A new electric powertrain, which now features a more capable motor and a larger battery pack, massively improves the power and torque over last year’s effort.

Like the original Magneto, the second generation still features a manual transmission, this time a 6-speed unit pulled from Dodge’s Challenger Hellcat to handle the massive power output. The Magneto 2.0 now features 625 horsepower and 825 lb-ft of trail-shredding electric torque. That allows the off-road beast to sprint from 0-60 miles per hour in just two seconds flat, making it as quick as a Tesla Model S Plaid, but in a Jeep.

Most electric vehicles eschew multi-speed transmissions in favor of a single gear because electric motors are capable of spinning to much higher RPM than the average gasoline motor, and delivering power in a more predictable fashion. By sticking with a six-speed manual gearbox, the Jeep concept allows for more options while off-road. An electric vehicle can’t stall out, and doesn’t need a clutch to begin moving, so you can effectively put the gearbox into any gear and immediately roll out from a stop. This allows the driver to select a low gear and still have a very slow but extremely torque-multiplied “crawl” gear, helpful for maintaining traction while climbing a trail.

[Related: Meet the Hurricane, a new twin-turbocharged engine by Stellantis]

The Magneto 2.0 Concept starts off as a two-door Wrangler, though a full foot has been added to the vehicle’s wheelbase to find more room for batteries. Jeep engineers then fitted the SUV with a three-inch lift kit and 20-inch wheels, as well as some extremely chunky trail tires. To save a bit of the weight that came along in the form of batteries and the stretched chassis, the company completely removed the roof in favor of a bikini-style top, and replaced the factory steel and plastic body panels with featherweight carbon fiber.

What comes next for Jeep’s parent company and EVs

It is clear that Stellantis, and Jeep as a result, are preparing for an electrified future. At the company’s EV Day last year, Jeep announced the tagline “Zero Emissions Freedom.” Jeep currently offers four different plug-in hybrid models around the world, though just the Wrangler and Grand Cherokee are offered in the U.S. market. While the so-called 4xe models have been extremely well regarded in the market thus far, these plug-in hybrids are simply a stop-gap measure for the brand’s vision. To get to a truly zero emissions future, Jeep will need to introduce some full battery electric models in a rapid fashion if it hopes to keep up with the new players in the EV off road game.

The brand has an ambitious goal to sell “zero-emission” versions of all of its vehicles by 2025, so it stands to reason the electric Wrangler could be coming soon. In fact, Jeep’s first all-electric model is set to launch in early 2023, based on the company’s Compass compact crossover. The transition to electrification is happening, and while Jeep has been a bit late to the party, it seems interested in making up for lost time.