Slide the Happiness filter to maximum and let AI do the rest. 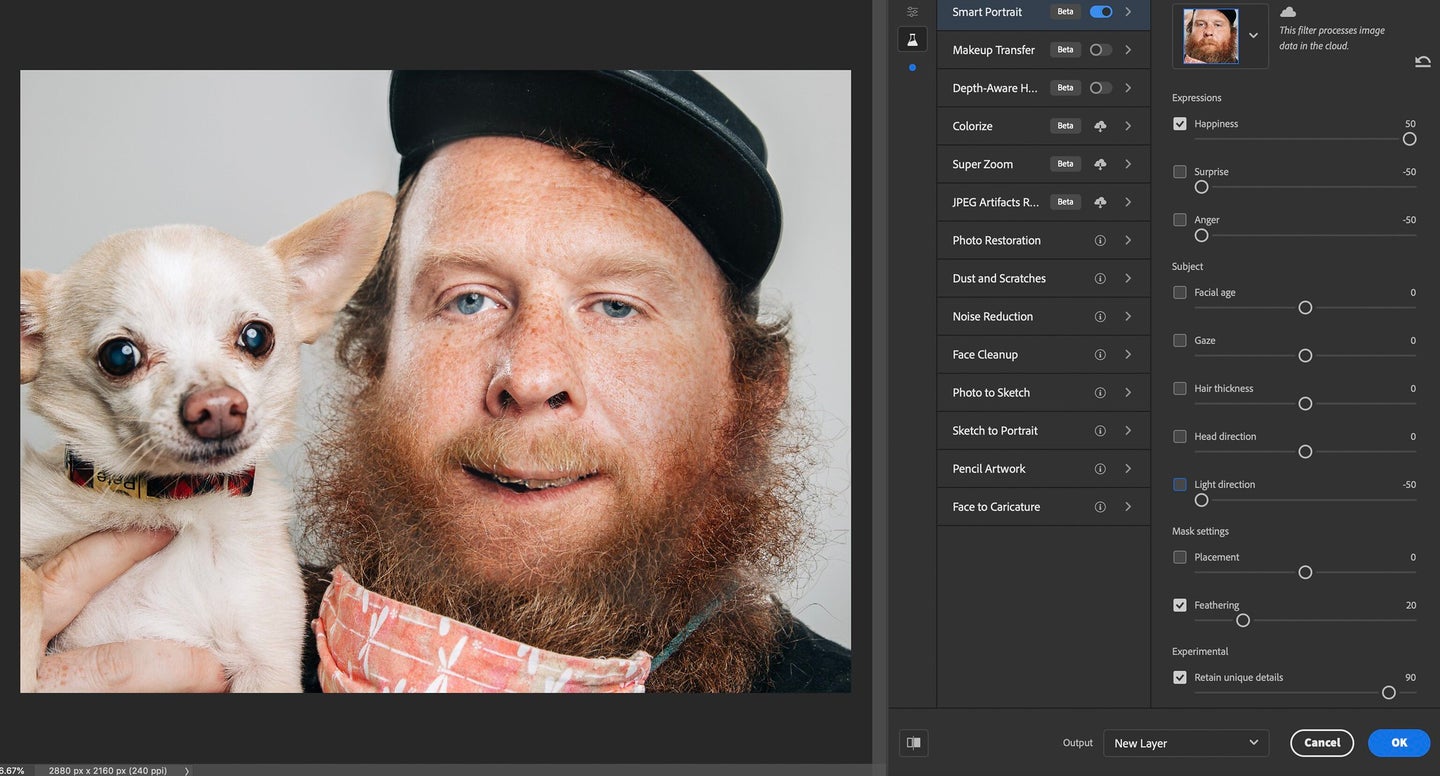 The Happiness filter quickly becomes the nightmare filter when you max it out. Stan Horaczek
SHARE

Artificial intelligence sometimes comes in very handy when using Photoshop. For years, now, users have been able to employ the software’s Content Aware tech to quickly and easily remove objects from images and expand photos beyond their natural borders.

The latest AI innovation to make its way into the venerable image editing software, however, pushes the automatic adjustments to an entirely new level. The Neural Filters work on Adobe’s Sensei platform, which encompasses its machine learning technology. They let you automatically tweak pictures of a human face in some impressive—and sometimes borderline disturbing—ways.

I chose the above picture of my own face to try out some of the filters because subjecting other people to AI-powered weirdness felt rude. For a while now, Photoshop has been able to recognize individual pieces of a person’s face in a photo and make independent adjustments to specific features via the Liquify tool. If you wanted to give someone the appearance of a small smile, you could already do that with a simple slider. You could slightly open or close their eyes a bit, too.

The new filters, however, take a much more holistic approach to the edits. To try them yourself, make sure you’re running the latest Photoshop 2021 update.

Under the Filters menu, select “Neural Filters” and it will open a new dialog box with two options visible: Skin Smoothing and Style Transfer. These are the basic AI-powered filters that do pretty much what you’d expect after reading their names.

The Skin Smoothing effect looks like something you’d find in Snapchat or another automatic “portrait” retouching app meant to hide skin imperfections. Cranked to their maximum level, you’ll look totally ridiculous—like an infant standing in front of a floodlight. In the middle, however, you get a more familiar smooth glow. It doesn’t look natural and it nuked almost all of my freckles, but it doesn’t look completely bananas unless you crank it.

Style Transfer works like the Prisma app that was popular a few years ago, only it can take the style of a piece of art and vaguely translate it to your picture.

If you click the test tube under the Neural Filters tab on the menu, however, that’s where things get weird.

The Smart Portrait features allow you to make sweeping adjustments to a human face on the whole. The top slider is called “Happiness” and pushing it to its maximum produced this horrible result that will almost certainly haunt you well after you’ve closed this article. It added teeth! Why?!

Move the Happiness slider all the way to -50, however, and you get something more believable. You may not even notice it was edited at all, if you weren’t familiar with the original.

The Surprise and Anger sliders look similarly ridiculous when slammed to their maximum values, but there are some believable looks in between. Because Adobe is processing the image in the cloud, however, you don’t get a live look at what you’re doing when you make an adjustment. You move the slider a little, then wait for the spinning wheel to disappear, and then you get a preview of your image. You can adjust from there.

This process takes an absurd amount of workload away from your machine and moves it to the cloud, but it still managed to spin up the fans in my powerful MacBook Pro.

Beyond the emotion filters, you can also tweak Facial Age, Gaze, and even head direction if you have the right photo. My beard really seems to throw off the tech whenever it tries to turn me in some direction.

The Light Direction filter is impressive. I took this photo as part of a light test for professional headshots, so it’s using three fancy studio lights placed in specific spots to get the desired effect. Moving the slider does a surprisingly convincing job of making it look like the main light source is coming from an entirely different place. Again, my beard screwed it up, but this is the kind of subtle effect that’s more convincing than aging my own face by 50 years. It’s also similar to what Apple and Google have been doing with their AI-driven lighting tweaks you can find in their photo editing and camera apps.

Some critics have already called this tech problematic because it enables people to edit and manipulate images in a convincing way. It is a big deal that this now lives inside the world’s most popular photo editing software, but these effects were already readily available with a few quick searches.

Right now, the results are fun, if not entirely refined. But, Adobe will get better over time as its tech has time to learn what works and what doesn’t from a growing sample size. For now, it still thinks my hat is a fancy hairdo and that it will age right along with me.