It can go off-road or you can take off the doors and cruise. 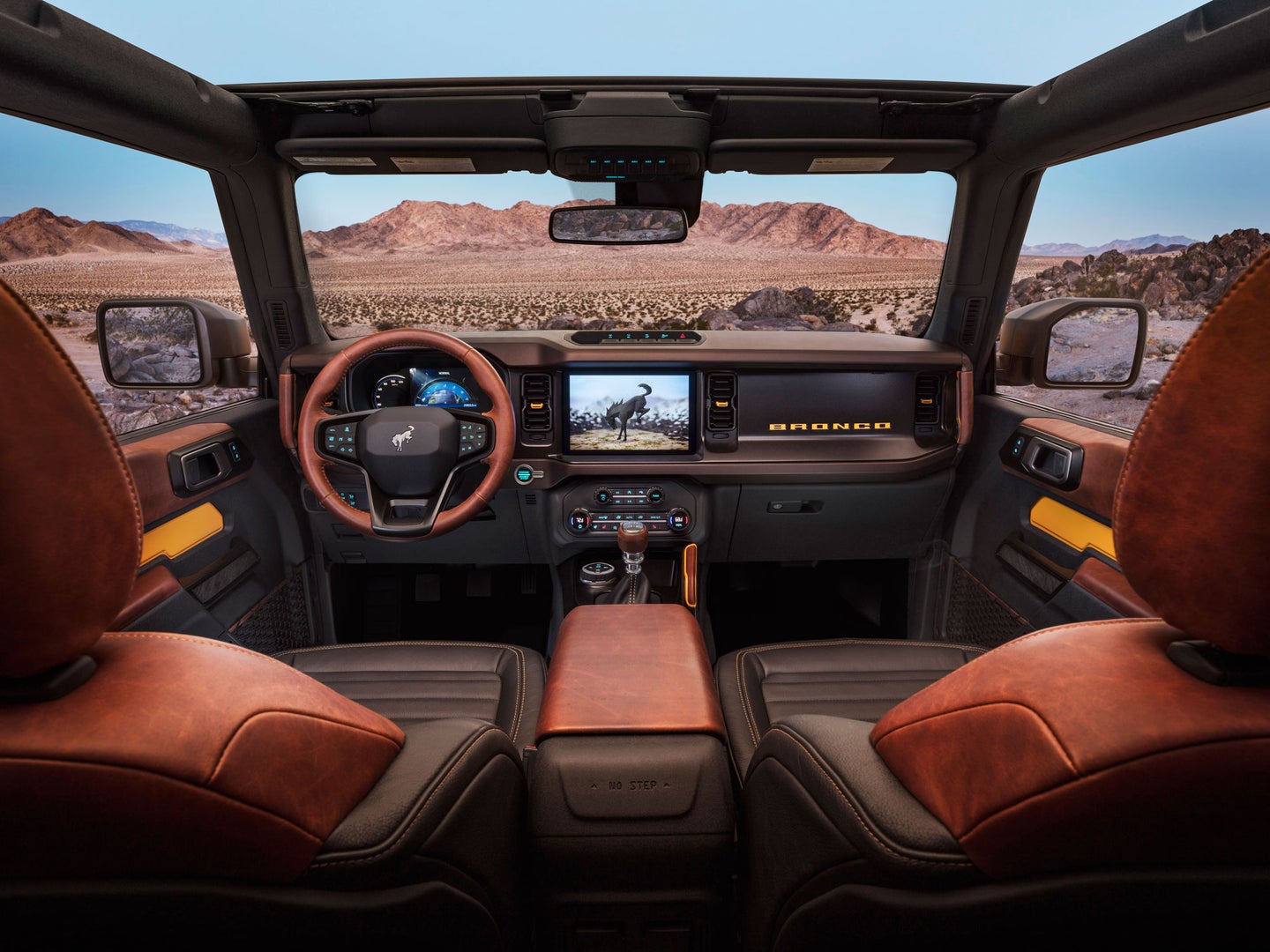 Despite its rugged nature, it's still equipped with plenty of tech. Ford
SHARE

The original Ford Bronco ended its run back in 1996. This week, however, Ford resurrected the iconic SUV line with the 2021 Bronco that starts at $30,000 and takes hard aim at the Jeep Wrangler. It seems like a perfect vehicle for the moment. The roof—and even the doors—are easily removed for Zoolander-style summer cruising. But, thanks to an optional upgrade to 35-inch tires and some clever off-roading technology, it’s capable enough of going off-road just in case you suddenly need a bug out vehicle. Here in 2020, bugging out doesn’t seem too far-fetched.

The announcement arrives after years of hype. The original run went for three full decades until OJ Simpson’s televised police chase profoundly shifted its public identity. It began in 1966, positioned as an alternative to Jeeps that maintained the burliness, but offered a more comfortable ride and comforts like a radio.

Like the Wrangler, Ford built the new Bronco with genuine off-roading chops. You can order 35-inch tires straight from the factory at every trim level. Jumping up from 33-inches offers better traction and more grip, which is important in treacherous terrain. Upgrade to the Badlands edition of the new Bronco and you’ll get a detachable sway bar on the front, which allows the wheels to articulate and keep traction on uneven surfaces, which would typically cause one tire to hang uselessly in the air. (Tires can’t get traction if they’re not touching the ground.)

From an engine standpoint, you can choose from a 310 hp, 2.7-liter V-6, or a 270 hp, 2.3-liter turbo-4, both of which live in Ford’s Ecoboost line. Purists will appreciate the option to forego the 10-speed automatic transmission for a seven-speed manual version.

The Bronco typically only offers two doors, but there’s now a four-door version. No matter how many you choose, the doors are removable and the process is simpler than it ever has been. The side-view mirrors, for instance, are now mounted to the body itself so you won’t be mirrorless with the doors removed. In the four-door version, there’s also space to store the doors inside the vehicle itself after you’ve popped them off, so there’s no need to padlock them to a tree or just hope they don’t get stolen when you stash them somewhere before a drive.

The off-road compatible details continue inside the vehicle as well. The rubberized floors have built-tin drains so you can basically hose the mud out of the car after it gets dirty. The seats are marine-grade, so they won’t grow mildew or stain when they get wet. The infotainment gear in the console isn’t meant for direct blasts with the hose, but it can withstand moisture and hard cleaning as well.

In short, it seems like the new Bronco actually lives up to the considerable hype.

When you peruse the Bronco options, you’ll also come across the Bronco Sport, which, despite its similar name, is a much different vehicle. The Sport shares more than 80 percent of its parts with the familiar Ford Escape SUV. It’s not meant for heavy off-roading like the base Bronco, but it does have higher ground clearance than a typical SUV—it’s on par with the Jeep Liberty Trailhawk—and has more power in its engine than the Escape.

Despite the popularity of the original Bronco, the Sport will likely be even more appealing to those who don’t ever plan to go off-roading. Generally, only about 15-percent of SUV owners ever do any real off-road driving, which makes upgrades like big, gas-economy-hurting tires more of a hindrance than an advantage. Those rubber floors could come in handy if you have kids, though.