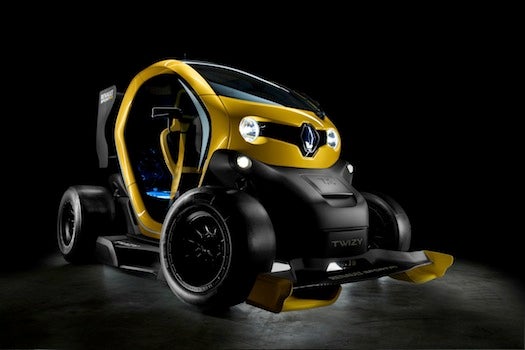 Renault’s latest concept car is the electric Twizy Renault Sport F1, a road car with a top speed of 68 mph. According to Renault, “its unique proportions give it the appearance of a beast that is about to pounce yet which is still fun to drive.” The car’s proportions also give it the appearance of a vehicle Wario might drive in the next Mario Kart. (That said, this car is way less weird-looking than Renault’s previous concept, which looked like a firefly on acid.)

The single-seater Twizy Sport drives on the same tires as Renault’s Formula 2.0 race car and features LED headlights and two electric motors. On the Formula One-styled steering wheel, there’s a screen that displays real-time vehicle data, such as the battery’s level of charge and the oil pressure.

The concept car also features a regenerative braking mechanism called the Kinetic Energy Recovery System, in which the energy from braking, rather than being lost as heat, is used to momentarily boost power output.