The flat track motorcycle racing season takes on dirt and danger in Florida. 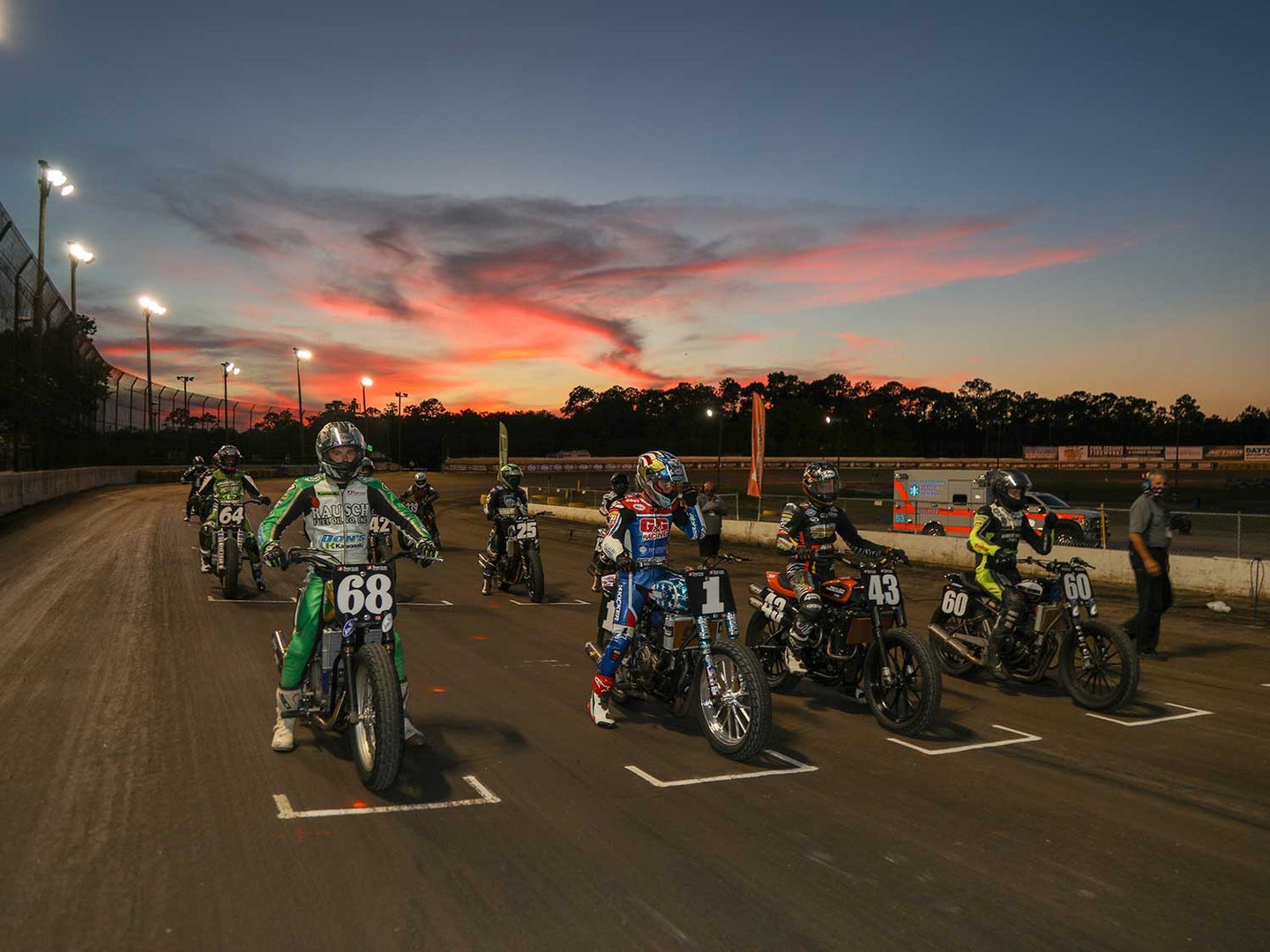 “This unprecedented time” is the worst offender among clichés surrounding the COVID-19 pandemic. But when faced with an awful unknown, people don’t reach for the thesaurus. They try to survive, both literally and financially, regardless of risk.

In that spirit, American Flat Track, a dangerous motorcycle racing sport even in the safest of times, is back. And true to its nature, it’s debuting in one of the least safe environs around—Florida. To be fair, it’s managing the risk with the same mindset that goes into mitigating the standard, run-of-the-mill danger that’s normally faced.

After a four-month layoff, riders and teams made the short trip to Volusia Speedway Park in Barberville, Florida, on July 17 to 18 for the Volusia Half-Mile I and II hosted by Russ Brown Motorcycle Attorneys. Having hosted World of Outlaw Sprint Car races, Volusia Speedway is certainly up to snuff for AFT’s Twins, Singles, and Production Twins.

Running doubleheaders over three days with a revised 12 minutes plus 2 laps race format, AFT is determined to salvage a season from the dumpster fire that is 2020. Basically, it’s the same number of races on half the number of usual tracks. And most of them are half-miles, with the notable exception of the historic Springfield, Illinois, date.

What was restarting a sport like in the face of a 100-year public health emergency? It took some planning.

“You have to supply a main roster,” AFT CEO Michael Lock informed riders and teams in early summer. Idea being, only riders and crew with a “job” are allowed in the paddock. No friends, “special” friends, hangers-on, or even wives in the paddock—unless they’re actually part of the crew.

“We changed all the usual ‘hard cards’ so we can track and trace people and work out where they’ve been and who they’ve interacted with,” Lock explains. So if anybody gets a positive for COVID, AFT will know who else to contact for testing.

And if you test positive? “They’ve got to go get tested and come back with a negative test before we let them back into the next race.”

It’s all part of a thick, 40-page book of COVID-19 protocol Lock holds up. Everything from mandatory mask wearing to hand-sanitizing stations is spelled out in it. He’s a bit dictatorial about his role. “I don’t care what your personal politics are, I have no interest. When I’m wearing this shirt and you’re wearing your team shirt, you behave according to the protocols.”

The big picture is clear. “We can’t afford to find ourselves on CNN.”

So how did things actually go, racing and otherwise?

Factory Indian Motorcycle’s six-time champion Jared Mees seemed unfazed by the protocol. “Frankly, I think it was fine. Wearing a mask is not ideal, to be honest, but we gotta do what we gotta do to get back to racing.”

To hear him tell it, the unwanted time off neither hurt nor helped. “I wouldn’t say either, really. I was ready for the season opener in March, and I was ready for Volusia. Either way, whether it be team preparation or my fitness training, we are always ready.”

Mees will have to work twice as hard over half the time to stay dominant. “The longer races are both mentally and physically challenging. As time goes on, I think the physical part will be more of a factor.”

From the Singles scene, Henry Wiles, RMR/American Honda’s newly minted rider, was unhappy about the extended layoff. “It hurt due to the time off and that time away just put me out of my rhythm.”

Wiles managed a third place in Friday’s main, and unlike Mees, he thinks the new 12+2 doubleheader format won’t change much. Will it shake up the leaderboard? “No, it won’t” is the short take.

The obvious other question is how this affected fans. In an odd way, they’ve adopted (maybe adapted to?) an element of danger, just like the riders they came to watch. The closer fans sit together, the greater the risk. Just like the handlebars clanging on the track, really.

A cursory review of track action shows a decent amount of social distancing in the stands, a good amount of masks in the paddock (careful, Mr. Lock is watching), and a conspicuous show of hygiene and protocol-following. The Honda Talon four-wheeler they use to terrify lucky guest riders on track during intermission saw lots of aerosol disinfectant between rides. Diapers might come in handier.

Afterward, Lock was upbeat and called the Volusia Half-Mile I and II a success. “I was pleasantly surprised with how quickly everyone adhered to the new protocols for distancing and use of PPE. Ultimately, everyone knows that our ability to do future races depends on this.”

While some see risk, others see managed risk. The pandemic may still be peaking in Florida, but given the chance to salvage the 2020 season, AFT will try. Although NBCSN’s contract and coverage is growing the sport, AFT relies on good old-fashioned gate receipts to survive. No fans in stands means no money. If it can produce an exciting season without ending up on CNN, true to its nature, it’ll try.

There are potential pitfalls in this approach, but AFT is rolling the dice. It’s not betting the house, but 14 days will tell if it’s playing with house money or not. If it succeeds, it’ll be one up on Major League Baseball—actual fans at a sporting event.

At the time of this writing, AFT reportedly has no interest in cutout fans. Take that, baseball.