Your kid wants a dirt bike. Here’s what to buy them.

Playbikes are a safe and fitting introduction to the sport. 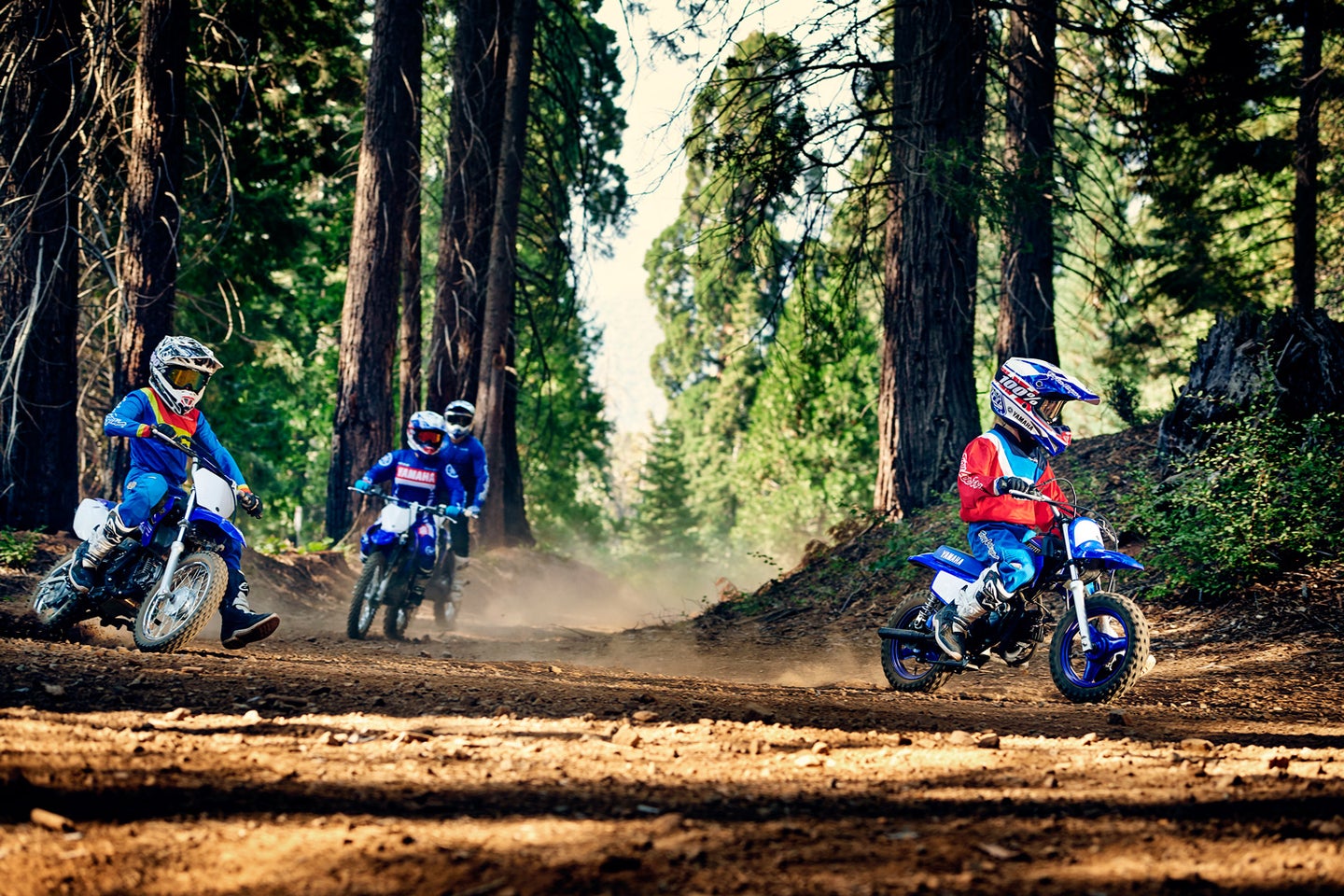 Playbikes are designed more for younger riders. They bring the fun to all members of the family. Yamaha
SHARE

Many questions are likely to run through your head the second you think about purchasing a playbike. But, first, what is a playbike? If you are a first-time buyer and not aware of the term, a playbike is a smaller-displacement dirt bike suitable for off-road riding with an intended audience of younger or shorter-statured riders between the ages of 4–16. These machines come in a variety of different displacement levels from 50cc to 125cc.

Take the rider’s age, height, weight, and skill level into consideration. Manufacturers design each displacement level of bike with suitable engines, tech, and safety features in mind. But as a shopper, it is up to you to research what the best option would be for your young rider and understand what they need to have a successful start to a life on two wheels.

What to expect at each experience level

The dirt bike/playbike’s engine displacement is one of the key elements to investigate, because it helps you gauge which power output is appropriate for the age/skill level of the rider.

Bikes like the Honda CRF50F and Yamaha PW50 have very approachable 49cc engines (four-stroke and two-stroke, respectively) that deliver the most manageable power for young newbies—these also have automatic clutch systems, but differ in that the CRF50F has a three-speed transmission while the PW50 is a single-speed.

When you graduate to 65cc, a bike like Kawasaki’s two-stroke KX65 is not so much a playbike as it is a full-on competition motorcycle; it brings a much different engine character than the aforementioned 50cc models with a strong, aggressive power delivery that is intended for youth-class motocross racing. And 85cc machines bring even more dirt-shredding capability with a focus on a widespread powerband, as Kawasaki states regarding its KX85.

Then come 110cc and 125cc four-stroke playbikes, where you start to get closer to power outputs and deliveries suitable for tweens, teenagers, and in some cases, adults, who are looking to do more casual riding as opposed to racing.

As briefly mentioned before, different displacements are also paired with clutch systems that accommodate the skill level of the intended rider. The youngest beginners on 50cc dirt bikes will have automatic transmissions—twist-and-go options. KTM has even specified that a bike like its 50 SX Mini is suitable for 4- to 10-year-olds. The 65cc and up bikes start to introduce manual clutches and require more rider skills to modulate the clutch lever and click through gears via the shifter. A bike like the KX65 has a six-speed transmission with both clutch and shift levers to manage, but a 110cc machine like the CRF110F has a semi-automatic transmission which has a shifter but not a clutch lever, making it a great transition bike for riders who are getting older, easing into shifting, or working their way up to a manual clutch system. Then finally, 125cc and above have manual clutches and four-to-six-speed transmissions, putting them the closest to full-size dirt bikes in terms of required techniques.

How to figure out sizing

The KX65 steps it up to a claimed 29.9-inch seat height, while an 85cc moto machine like the Suzuki RM85 is said to be 33.5 inches. These seat heights are a little taller than their playbike counterparts because 65cc and 85cc two-stroke models are competition-oriented machines and thereby feature more suspension travel to absorb the bumps and jumps that are ever-present on a motocross track.

Trailbikes like the KLX110R L—as signified by the L in the name—suits taller riders with a 28.7-inch seat height compared to the base KLX110R’s 26.8 inches. Another model for taller riders is the Honda CRF125F Big Wheel with larger wheels that bring the seat height up to a claimed 30.9 inches versus the base CRF125L’s 29.1.

Dirt Rider is working on measuring 50cc, 85cc, and 110cc dirt bikes in house, so keep an eye out for those published stories to find out the real measurements.

How much do playbikes cost?

Well, there are plenty of options that range under the $5,000 mark, but prices really vary between applications; trailbikes tend to be on the lower end of the price range, and bikes focused more on motocross/competition tend to be more expensive. Here is a general breakdown of pricing by displacement: