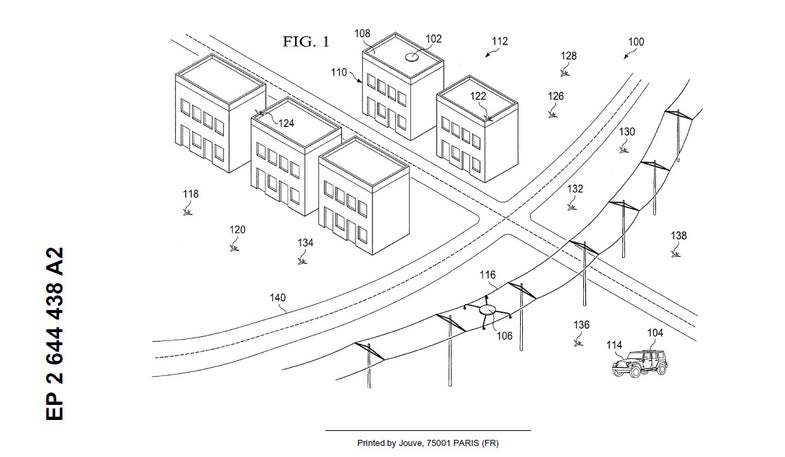 Small drones are already effective weapons for urban warfare—when armed with miniature warheads, these stealthy spies can turn into lethal assassins. So far their biggest limitation is battery life, but Boeing’s patent for a drone battle station sets out to overcome that.

The aerospace giant’s ‘Vehicle Base Station’ resembles Amazon’s proposed recharging stations on street lights, but with a different mission. John Vian, a research fellow at Boeing, says the station’s main applications are likely to be civil and commercial—used for firefighting and search-and-rescue, for example—but the patent has a decidedly military slant. “The unmanned aerial vehicles may monitor for undesired activity… [which] may be the placement of an improvised explosive device in roadway.”

Before coming up with the base station idea, Vian and his colleagues had been looking for the next big thing, and they zeroed-in on ‘fractionated systems’–groups of small ground and air robots working together to carry out tasks. “The patent arose from the recognition that these smaller smarter platforms may have limited endurance,” Vian told Popular Science.

The patent describes a squad or platoon of perhaps 10 to 30 drones, able to follow targets or perch and observe like a fleet of mobile CCTV cameras. When a drone runs low on power it returns to the base station, which physically replaces the drone’s batteries. With no wait for recharging, the drone can fly off again at once. The autonomous battery-swapping device would “enable long, 24/7, uninterrupted missions,” says Vian. In principle, the base station would allow drones to operate in an area for days, weeks, or months at a stretch.

Clandestine operation is part of the plan. The patent suggests a solar-powered station could be placed on a rooftop where it cannot be seen. Alternatively, the station may be attached to a power line to suck electricity directly from the grid. It could still be covert, hiding in plain sight; few people pay attention to all those black boxes attached to power lines. If some base stations are lost to enemy action, multiple spares would ensure there was always capacity.

Boeing also envisions a line of base stations positioned at intervals of several miles, like gas stations for drones on long journeys. This would allow them to fly right into a combat zone rather than having to be dropped by aircraft.

According to the patent, the base station could act as a shelter in bad weather, a sort of pigeon loft for drones. It may also be a communication hub, housing a satellite microwave link to a remote operations center. In one version of the design, the drones fly missions autonomously, uploading the data they have gathered and receiving fresh instructions each time they return. This would allow them to operate even if all radio signals were being jammed, a growing counter-drone tactic.

The base station might also be able to reload drones with a ‘dispensable payload.’ Fire suppressant is mentioned as an example, though this seems optimistic for small drones–bombs are a more obvious choice. Hezbollah recently released a video of small drones apparently dropping grenades on enemy positions. Similarly, the U.S.’s Switchblade, a lethal drone weighing less than five pounds, carries out kamikaze-style attacks via its on-board munitions. But a reusable attack drone has obvious advantages, especially when the potentially hazardous return-and-reload operation is carried out remotely.

The developers built an indoor test bed to prototype the base station concept using small drones, and they say translating the system into real life deployments would not be difficult.

Boeing is one of the dominant players in the military market, producing aircraft like the B-52 bomber, F-15 Eagle, and AH-64 Apache attack helicopter. If the base station moves from concept to reality, it would allow swarms of low-cost drones to carry out missions at long range and over long durations, shaking up the market and maybe the entire face of warfare. Perhaps the next big thing from Boeing will be much smaller than the aircraft we usually associate with the name.